The Death and Life of Great American Cities 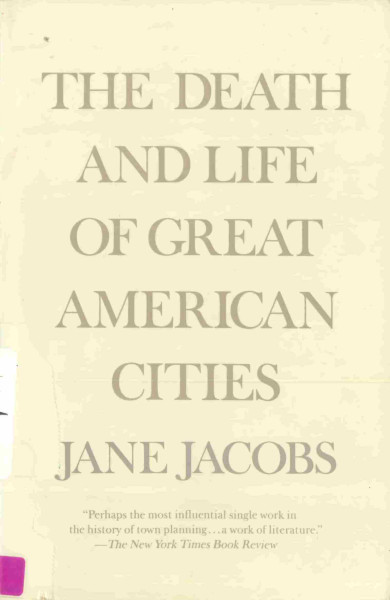 The Death and Life of Great American Cities by Jane Jacobs has become a classic in urban planning since its publication in 1961. I had long wanted to read it, especially since Jacobs lived in Toronto for over forty years. Although Jacobs was an American, I as well as many Torontonians considered her one of our own. My library system chose Cities as one of its highlighted Raves & Faves several years ago and when new titles were introduced to this ongoing series, I picked up one of our withdrawn copies.

It took me six weeks to finish Cities. During my first two days I was spellbound by the lengthy introduction; so much so that I read it through twice. All I could talk about was how visionary Jacobs was. That is no exaggeration; I did in fact rave about the introduction to several people, including to my partner who has a degree in urban planning. I could see Jacobs’s genius in the introduction alone, and after I finished reading it the first time, I felt I had to read it over again. It was so full of valuable insights, that had I been given a highlighter to mark the key points, I would have given every sentence a golden hue. However once I finished the introduction, I put all reading on hold for eight days because my mother died suddenly. Understandably, I had other priorities and even though I suffered sleepless nights immediately following her death, I could not use that time to read or do other things. My body was tired but my mind raced and I could not concentrate on reading. I feel that I will post the details about my mother’s death in the new year, yet now that I have read some more books I have to get their reviews written and posted. I will therefore forever associate The Death and Life of Great American Cities with my mother’s death, and at what point in the book I was when I discovered my deceased mother in her home.

For good reason Cities has earned its reputation as a groundbreaking work on city planning. Jacobs was not afraid to turn the prevailing orthodoxy on urban planning upside down by calling some of its prevailing attitudes foolish. Her views which shook the 1960’s are now on university curricula. Some of her theories seem so basic now, that even one like myself who is not schooled in urban design can see the sense in them. How could her ideas have been so controversial over fifty years ago? I feel that her outright challenge of the orthodoxy really threw her urban colleagues. Jacobs rocked the boat, which had been idly floating by for decades. It’s as if your mother, fed up with your messy bedroom, had finally had enough: she tore her way in there and started cleaning up and reorganizing. She grabbed your head, focussed your attention on what she was saying and made you listen. And then no one could deny that she was right.

I cannot state enough how mesmerized I was by this book. At the beginning I was nodding in agreement with her views on sidewalks and the whole idea of using them to create vibrant, well-used and most importantly, safe urban spaces:

“When people say that a city, or a part of it, is dangerous or is a jungle what they mean primarily is that they do not feel safe on the sidewalks.”

How true. When children play outside they often stay close to home, and use the sidewalk adjacent to their home. Jacobs was not swayed by the prevailing view that sidewalks were places to be avoided. Clearly, sidewalks were the lifeblood of the city and where children, as well as all inhabitants, should find the greatest sense of security:

“Some city sidewalks are undoubtedly evil places for rearing children. They are evil for anybody. In such neighborhoods we need to foster the qualities and facilities that make for safety, vitality and stability in city streets. This is a complex problem; it is a central problem of planning for cities. In defective city neighborhoods, shooing the children into parks and playgrounds is worse than useless, either as a solution to the streets’ problems or as a solution for the children.
“The whole idea of doing away with city streets, insofar as that is possible, and downgrading and minimizing their social and their economic part in city life is the most mischievous and destructive idea in orthodox city planning. That it is so often done in the name of vaporous fantasies about city child care is as bitter as irony can get.”

Instead, one should develop the urban landscape of the sidewalk as a safe environment for all city citizens, not just children. Jacobs dismisses the zoning of urban play spaces, and goes to great length to reveal how these artificial playgrounds, often situated far away from residences, are often vacant even during the summertime:

“It is futile to try to evade the issue of unsafe city streets by attempting to make some other features of a locality, say interior courtyards, or sheltered play spaces, safe instead. By definition again, the streets of a city must do most of the job of handling strangers for this is where strangers come and go. The streets must not only defend the city against predatory strangers, they must protect the many, many peaceable and well-meaning strangers who use them, insuring their safety too as they pass through. Moreover, no normal person can spend his life in some artificial haven, and this includes children. Everyone must use the streets.”

Jacobs grabbed your attention and forced you to confront reality. Open spaces and fields of grass within urban settings may look good on paper and on designers’ cutesy mock-ups but they were dead zones in real life:

“But people do not use city open space just because it is there and because city planners or designers wish they could.”

Jacobs herself visited these spaces in New York City, where she then lived, and also visited urban green spaces in other American cities, and noted how few visitors they received. She saw more children at play on the streets surrounding their homes, either on the sidewalk or in the alleys or rear parking lots. Planners cannot expect people to visit their green spaces just because they are there:

“You can neither lie to a neighborhood park, nor reason with it. ‘Artist’s conceptions’ and persuasive renderings can put pictures of life into proposed neighborhood parks or park malls, and verbal rationalizations can conjure up users who ought to appreciate them, but in real life only diverse surroundings have the practical power of inducing a natural, continuing flow of life and use. Superficial architectural variety may look like diversity, but only a genuine content of economic and social diversity, resulting in people with different schedules, has meaning to the park and the power to confer the boon of life upon it.”

Integration of work and play is essential in vital city planning. Jacobs was no fan of creating these special parklands. She crushed the prevailing belief that urban centres needed to be dispersed over fields of verdant lawns, as if grass was the all-encompassing solution to relieving planners’ needs. People who were living in such high concentrations were considered to be a danger to themselves. Open grassy spaces to the rescue!:

“American downtowns are not declining mysteriously, because they are anachronisms, nor because their users have been drained away by automobiles. They are being witlessly murdered, in good part by deliberate policies of sorting out leisure uses from work uses, under the misapprehension that this is orderly city planning.”

While the first three chapters of Cities, all devoted to sidewalks, captivated my attention, I was less interested when Jacobs discussed districts versus neighbourhoods within cities. I could not grasp the differences between the two. Nor was I moved by the chapters on the slumming and unslumming of cities or “gradual money” and “cataclysmic money”. These were the rare chapters where I just couldn’t wait to turn the last page. However Jacobs covered topics–perhaps never addressed before 1961–about border vacuums, mixed uses and diversity of city businesses and facilities, and even the schedules of urban citizens. I could see how these subjects revolutionized the then current world of city planning. Later chapters covered such topics as subsized dwellings, erosion of cities and salvaging projects. All of these topics were in can’t-put-down chapters. Jacobs was able to make such topics read as page-turners and not just for a readership of urban planners.

Cities was at times a laborious read, yet for the most part its 448 pages of jam-packed text sped along. If this book was reprinted, it would be three times as long owing to today’s trend of fleshing out pages with wide margins and gaping spaces between lines. Don’t let the formatting–black slabs of solid text–dissuade you from reading this classic.