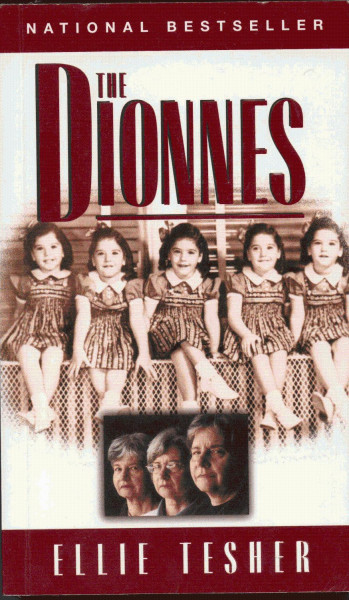 I started reading The Dionnes by Ellie Tesher while in the Cape Town departure lounge waiting for my flight to Johannesburg. Since I did nothing but read this book while flying back to Toronto, I almost finished it on board. I have always been attracted to the Dionnes’ story yet this is only the first book I have ever read about them. When I read a book I start from the front cover, and I mean it. I am interested in the bibliographic and publishing data and I like to see how the book is catalogued. The first page of cataloguing information credits one of the cover photos to Peter Powell of the Toronto Star. Yet on the first page of the Acknowledgements it says:

“I thank Peter Power of the Star for the powerful photo that helped connect me to the surviving Dionne quintuplets and their story, and that so appropriately graces the book’s cover.”

So I rolled my eyes at the shoddy editing job even before I got to the official page one. Tesher herself works for the Toronto Star so I wonder how that mistake could have been made.

The Dionnes’ story is nothing less than tragic. The quintuplets were removed from their northern Ontario household shortly after their birth and under the pretext of maintaining their fragile health they were isolated from their parents. What may have been a noble yet necessary precaution to protect five premature infants turned into a circuslike freakshow where five toddlers were exhibited at scheduled times in a grotesque human theme park known as Quintland. The girls never knew their own parents or their siblings, and by the time they were reunited as a family the estrangement had already set in. The girls were regarded as pariahs in their own family and Tesher reports that to this day their many siblings shut them out of their lives.

At the time The Dionnes was published in 2000, three of the quintuplets were still living (Annette, Cécile and Yvonne; Yvonne died in 2001) and Tesher was given rare access to them for this biography. The Dionnes usually shun the media but needed Tesher’s help as they sought publicity in their threatened lawsuit against the Ontario government for pilfering their trust fund. Tesher exposed how the girls’ fund was emptied as it paid for the means of their own blatant exploitation, for it was the quintuplets’ own money that funded Quintland, not the government’s, even though the government was raking in millions of tourist dollars in the years immediately following the Depression:

“The commercialization had turned the sisters into a flourishing industry instead of five members of a family. And it was all made possible by the unique legal structure the provincial government had set up to exploit the situation.”

Legislation was rushed through parliament to give the government some veil of legitimacy behind its money-making exploitation of the Dionnes. The doctor who assisted in their birth, Dr. Alan R. Dafoe, was portrayed as a self-obsessed egotist with a God complex, who wrested the sisters from their parents and put them under his care in a facility specially built for them named not after the Dionnes but after himself: the Dafoe Hospital and Nursery:

“What was really wrong in all of this was the official stamp of approval given to Dafoe’s belief that he had more rights as regarded the five girls than did their real father and mother.”

Numerous medical and psychological tests were conducted on the Dionnes and it was also their own trust fund money that funded these dubious tests, as well as paid for the doctors and nurses:

“A 1937 scientific paper that [Dr. William E.] Blatz and his associates coauthored in Collected Studies on the Dionne Quintuplets for the University of Toronto openly enthuses that ‘for the first time in history five children are growing up in a restricted social atmosphere of multiple contemporary siblings.’ In its conclusions, the paper also points out fairly proudly that ‘for the past two years they have been on display almost daily.'”Although Blatz is still revered by some as the father of child psychology in Canada, none of the tests he administered was necessary for the healthy development of the five little girls. The children received no counselling or treatment with regard to their unusual upbringing, or as a result of his findings.”

“If anything further was needed to confirm the sisters’ feelings that they were part of a sideshow, it was the fact that they were treated as laboratory specimens by scientists, with the government’s blessing.”

I did not like Tesher’s overwrought maudlin tales of woe as she reported how Annette, Cécile and Yvonne were stricken with health problems and couldn’t work any longer, or couldn’t work at all in the first place. The sisters are portrayed as pathetic figures without any sense of inner strength to triumph over past tragedies. Ironically, it was hard to have any sympathy for these sisters since Tesher made them out as cowardly weaklings afraid to set foot outside their own front door. In spite of this portrayal, by the end of the book they found the resolve to make the Ontario government right its past wrongs against them by awarding them $4 million in compensation. Without a lawsuit, and only through the negotiations between the sisters with their lawyers and the government, they found the strength and confidence to turn down smaller offers, some of them as high as seven figures, until they reached a figure they felt they deserved. The sisters can stand tall knowing that they will live the rest of their lives proudly vindicated, and not as victims of the exploitative Ontario government.