One of the highlights of my trip to North Korea was our visit to the Demilitarized Zone, or the DMZ. For a border freak like me, I was excited about getting within centimetres (and then actually across) the heavily fortified frontier with the South. The two countries are separated by a strip of land 250 km long and 4 km wide (2 km per side). It is anything but demilitarized, for the DMZ is actually the most heavily militarized border on the planet.

The DMZ is a surreal experience: it is the Cold War come to life. As our bus drove south from Pyongyang and neared the sensitive area, I realized how the terrain was modified to thwart an invasion. Trenches were dug and tank traps appeared. Spanning the road were enormous Stonehenge structures: columns created out of gigantic blocks, topped by stack upon stack of concrete slabs. These would be big enough to stop tanks if the pillars were imploded. It is no exaggeration when I say that my heart beat faster as we approached the outer limit of the DMZ. From reading travel blogs I was familiar with the experience of entering the DMZ from the South, yet I did not know what to expect when entering the DMZ from the North.

One such “Stonehenge” at the DMZ:

Once we approached the outer perimeter a guard boarded the bus and talked to us with one of our guides interpreting. We then had to get off the bus and enter a building which was a combination gift shop and lecture area. I found it funny that in Communist North Korea, you entered this building via the gift shop. I was rather disappointed that there was hardly anything to buy there; I just bought a small English book on Panmunjom. The guard who boarded our bus stood in front of a ceiling-high map and gave a brief talk about the history of the area. We got back on the bus and inched along as we drove past the fence and formally entered the DMZ. 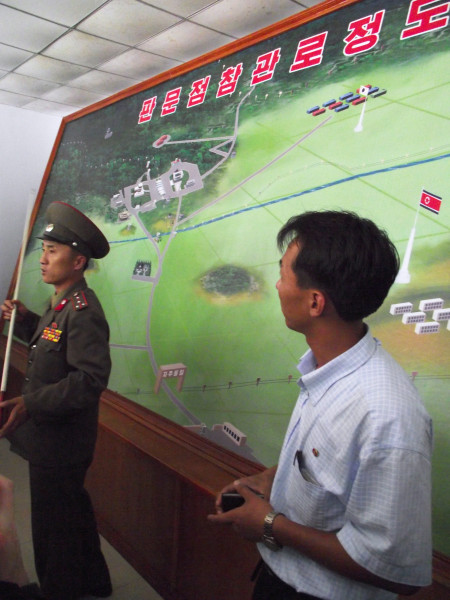 The first things you notice (you really can’t not notice them) are the sky-high flagpoles: a vexillological pissing contest between the North and South. The DPRK wins with its 160 m pole versus the ROK with its puny counterpart at 98 m. In 1993 American President Bill Clinton called the DMZ the scariest place on Earth. I wouldn’t call it scary, at least not for visitors from the North. The Americans really play the tension game in all the travel books and blogs I have read about visiting the DMZ. Travellers from the South must abide by a dress code–no doubt to show the North that life on the other side is so much more affluent–and one is kept in line by strict orders from the military guards. My group in ironic contrast to all the propaganda we hear about the west was given more freedom on the Northern side than tourists are allowed on the Southern side. We did not have a dress code and could wear whatever we had put on that morning. We could take as many photos as we liked, even of the military on both sides of the border. And most importantly, we were allowed to talk amongst our group as we walked around the most sensitive areas of the DMZ. The North allows these liberties in order to show the South how much “freedom” they award their visitors and citizens. Visitors from South Korea on the other hand are kept in line and are told to shut up.

We entered the Joint Security Area where the North and South meet. Here is a perspective that one rarely sees, a look from the North across the border into the South:

Freedom House is behind the blue conference houses. The Joint Security Area is famous for this row of conference houses which literally straddle the border. Our group entered the central house and wandered about, and I literally crossed the border and listened to our lecture from the South Korean side. The photos below show the concrete curb that marks the border:

If anyone had any ideas about defecting to the South through the door on the other side, he’d have to pass these guys first and break down a locked door: 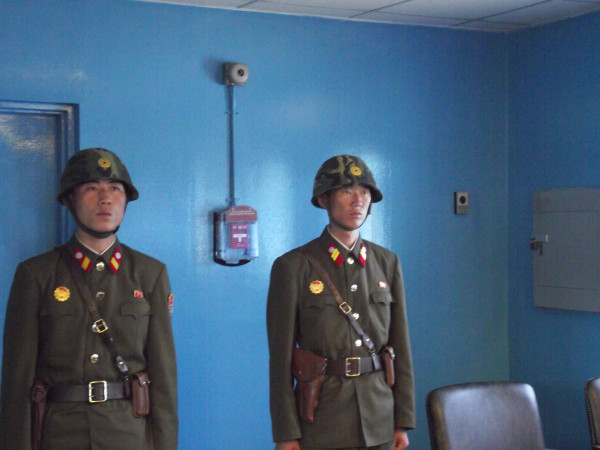 After standing so close to freedom in the South, and especially after sitting (however briefly) in the South, it felt strange and surreal to walk back towards North Korea. Everyone in my group felt this way as we talked about the visit on the bus ride back. We were all from democratic countries, free to travel, free to live where we wanted and free to criticize our own governments if we wanted to. And we were walking back into the most repressive country on the planet. When the tour ended and we headed back to the bus, it seemed that we were all making a conscious choice to choose the North over the South. Our sense of appreciation for our own home countries never felt stronger. 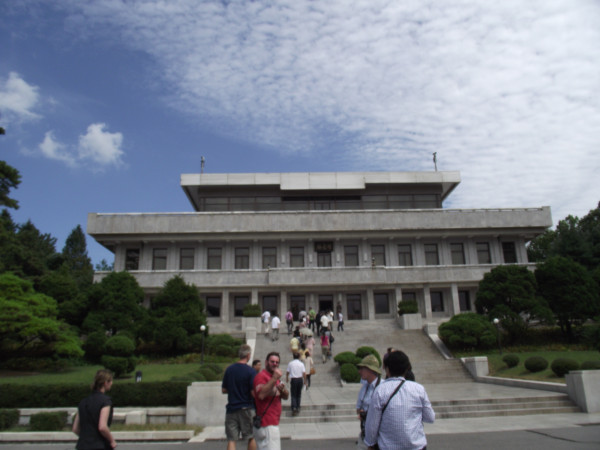