The DPRK–A Land of Prosperity 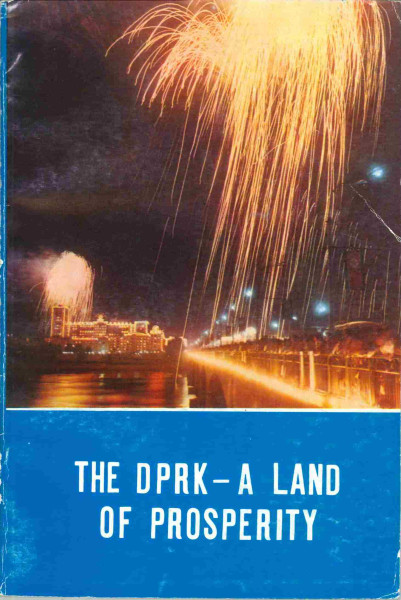 While I was on my country-wide visit of the Democratic People’s Republic of Korea during the autumn of 2011, my group visited several cities that had heretofore been closed to foreigners. My group was indeed the first of its kind to see the northern part of the country, which had suffered the worst during the famine yet had by then recovered to a degree that authorities would permit visitors to now see. I stayed in hotels that hadn’t seen a guest in three and a half decades. In North Korea, there are bookstores in every hotel and I was given the opportunity to buy some political literature that had long been out of print, and which I never saw even at the large Foreign Language Bookshop in Pyongyang. I came home with some paperbacks that were going on forty years old. One such book, from 1976, was The DPRK–A Land of Prosperity. This is a collection of articles written by foreign journalists to commemorate the 25th anniversary of the founding of the DPRK in 1973.

No book on the DPRK would be complete without gushing praise for the Great Leader Kim Il Sung. Ch. R. Ndoumbe Nkotto, head of the press section of the Ministry of Information and Culture, Cameroons wrote glowing and flowery praise, what one would ordinarily expect from a DPRK citizen, in the collection’s first article, entitled “The Democratic People’s Republic of Korea Will Win Victory Under the Revolutionary Banner of the Juche Idea”:

“Before setting about our study it would be appropriate to give a brief biography of great Comrade Kim Il Sung who founded a socialist state, the Democratic People’s Republic of Korea, and who is its first leader. In effect, when the world people speak of Korea in general, they first think of President Kim Il Sung, the respected and beloved leader of the entire Korean people. He exactly personifies true Korea and is unquestionably the real visage of true Korea.”

We might snicker at the title, A Land of Prosperity, knowing what we do about the current state of the North Korean economy. However in 1973 journalists had a firm factual basis for raving about the economic paradise that lay north of the DMZ. For up until the early 1980’s, the Northern economy prospered while the South suffered under political turmoils of its own. So the overall tone of the articles is one of grandstanding, showing off the bountiful North while the southern half of the Korean peninsula suffers in misery. One may rightfully state that no economic boom is required in order for the North to write about economic prosperity since the grass is always greener on the northern side of the DMZ, but at least in the mid-seventies the reader knows that he can base the premise behind these articles on fact and not Northern propaganda. Nevertheless, sometimes the propaganda does get spread a bit too thick, as Saul Ndlovu, editor-in-chief of the Zimbabwe Review, writes in regards to Korean reunification:

“If negotiations succeed, as they must sooner or later, they will end an unhappy situation which has separated the miserable and hungry masses in the south from the healthy and happy sons and daughters in the north and where exploitation and beggary went with the defeated Japanese imperialists.”

“Owing to the colonial enslavement policy of US imperialism, the national economy of south Korea is ruined and even the national culture, beautiful customs and way of life characteristic of the Korean people are trampled underfoot there. Depravity and immorality prevail all over south Korea.”

Most of the articles were written by journalists from communist states, or from the emerging sympathetically socialist countries of Africa. Hilda Murray, editor of the Organ of the Canadian Women’s Congress provided a rare western, as well as female, opinion in her article, the title of which was chosen for the title of the book. Murray, unsatisfied with the state of Canadian fruit production, wrote:

“Biting into an expensive undersized Canadian apple I am reminded of the dozens of meetings where great bowls of fruit, crystal clear apple juice, cider and big jugs of pear, peach and apricot juice were always on the tables, not only at meetings but at every meal–not forgetting the potent Korean wine, of course.”

Murray would be surprised to know that her undersized Canadian apple now dwarfs any and every kind of fruit, because there isn’t even a grape to be seen in the DPRK. I never saw fruit while I was there, nor any milk products. I look forward to reading more books that were printed in the early seventies.