The Drive to Akureyri

Mark and I left Reykjavík early Tuesday morning to drive to the northern town of Akureyri. On the way we stopped off at Þingvellir National Park, the site of the first Icelandic parliament. It was such a beautiful and sunny day. Typical Iceland weather meant that it was chilly at times but two minutes later you’re taking your coat off and sweating it out. We saw the tall basalt columns and the continental divide where the tectonic plates divide the Americas from Eurasia. It is a popular tourist destination both for foreigners and Icelanders.

When you leave Reykjavík you exit via a three-lane highway (six lanes combined both ways) yet this tapers off to two then finally to a single lane in each direction. A single lane of paved road encircles the entire island. We ascended often to elevations of 1000 m as we drove between mountains, all of which were capped with snow. Many had snow valleys and large snow fields often fell below us, since we were always climbing. The fog coming between the mountains was eerie, as if dangerous spirits awaited us as we rounded the bend and proceeded through the next mountain valley. There was nothing on the land: no settlements, no animals, no trees. Even guardrails were nonexistent. As we climbed one mountainous region, there was only the narrow paved road. Nothing to brace our fall should we skid off course. We remarked how narrow the road was, and Mark often pulled to the right to let other vehicles pass. He did so out of habit, as there was plenty of room for passing vehicles; we’re just used in Canada to having a little more room.

The landscape seemed lunar. Cliché, but true. The hills were yellowish and pyramidal and looked easy to climb, but that was probably an illusion. Since there was absolutely nothing else on the landscape, you could see cars (all of which had to have their front lights on, by law) from very far away. The wind was brutal and ice cold. I immediately drew the conclusion that I was on a northern version of Tristan da Cunha. We stepped out to visit a rest stop and froze as we walked inside.

The roads hug the coast and line the perimeter of the fjords. It can take a long time to get from the side of one fjord to the other, however soon after we left Reykjavík we took a new tunnel, 6 km under the Hvalfjörður. It cut down driving time from an hour to just a matter of minutes. As we entered the northern part of Iceland we passed many fjord deltas. The areas in the U part of the delta are luxuriantly green, with deltaic features such as small straight rivers crisscrossing each other and winding, looping ones as well. I could see future oxbow lakes within these deltas.

We took a detour to visit the sealing town of Hvammstangi, a small town on the Miðfjörður. Akureyri is the fourth-largest city in Iceland, with a population of 18.000. We stayed at the hostel on Stórholt for two nights. They’re rather rules-obsessed at this hostel, where one is required to remove one’s shoes at the entrance. I was not impressed with this quirk of the hostel owner (even though I insist upon this same practice at home). I found walking up and down the narrow spiral staircase in stocking feet to be rather dangerous. I also didn’t like the restricted hours on the use of the kitchen, and when I was told by one staff member that I could stay after 11:00 a.m. when it was scheduled to close, someone else kicked me out.

It is cold up here. When I packed for this trip I recalled how cold I was during my summer cruise two years ago up the Norwegian coast, from Bergen to Kirkenes. This time I was glad I packed my sweater, as well as a light jacket. I need to wear both. However both Mark and I regret not thinking to pack our gloves. It’s July and we need gloves!

I am finishing up this travelogue on the evening of July 2, and we are still in Akureyri. Our flight to Grímsey could not take off this morning since the fog was so low. We got to the airport at 8 a.m. for our 8:30 flight but we saw on the departures board that it was delayed. An update from Grímsey came almost every hour and the flight kept on being delayed and then finally at noon we decided, after hearing from airport officials that the likelihood of flying out was nil, to get a refund on our airfare. We can take the ferry tomorrow, although we would only be able to stay on the island for four hours, and catch the same ferry back that we would have taken had we flown there. So what did we do with our day? We visited Húsavík and saw the remarkable waterfall Goðafoss. Pictures and details to follow in the next travelogue.

I have noticed that signs in Iceland are almost all in Icelandic. It is rare for a public sign to be posted as well in English. I think the Icelanders are like the Québécois in that they feel that their language is threatened–by English, of course–and want to keep all sight of it out of public view. This is the case even though everyone speaks English here. We have not had any difficulty making ourselves understood, although I as the language buff seem to ask every Icelander if I am pronouncing the language correctly. So much of what you see of Icelandic in print is not reflected in a phonetic pronunciation. I seem to be a tad too keen on getting a precise pronunciation that I catch myself asking the locals how I’m doing every time. I am even getting annoyed with myself. I even asked how one pronounces “Grímsey” correctly. There is a slight palato-alveolar sound to the -s-, so it sounds a little like -sh-.

I have written many postcards (and two Icelandic birthday cards) but have not mailed anything yet. I want to post everything from Grímsey. I wonder what the postmark will say. Grímsey? Akureyri? Dalvík (the nearest port)? 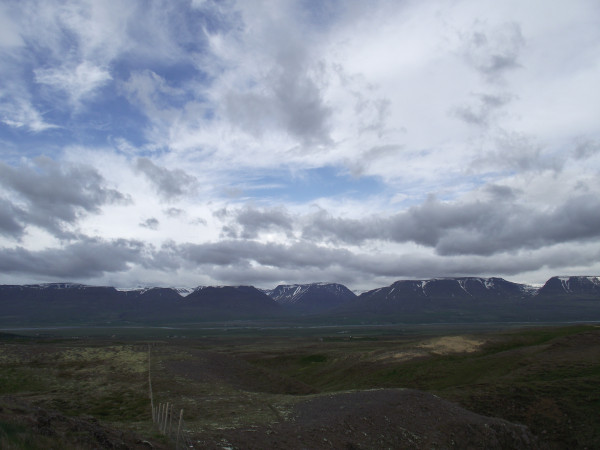