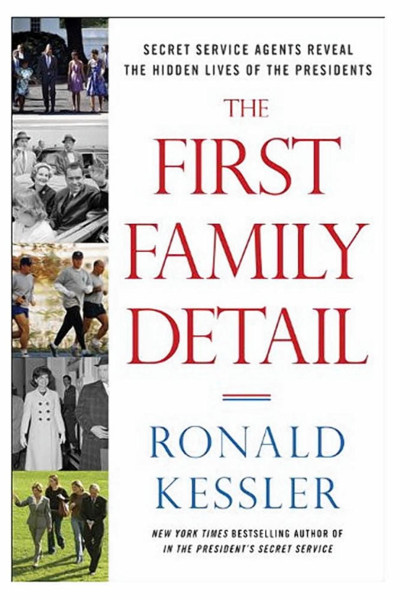 I expected more from The First Family Detail: Secret Service Agents Reveal the Hidden Lives of the Presidents by Ronald Kessler. An exposé such as this should have been high on facts and low on tabloid innuendo. I came out learning absolutely nothing that I didn’t already know via the standard press or even through the tabloid media. After checking the price of this book–$31 Canadian–I would have definitely felt ripped off. I had my prejudices about this book, I admit, before I read a single page. There is a suspicion that lurks within a book by its presentation alone. I am talking about the red flag that is the curse of a large typeface, wide margins and gaping spaces between the lines. This is a book not for scholars nor was it written by one; it was presented as a quick read for those who barely have an attention span left to manage through ten-page chapters. A book with this subject matter wouldn’t be fleshed out to a mere 246 pages; it would be of legendary Henry Kissinger or Condoleezza Rice proportions.

Needless to say, I felt spoken down to as I read The First Family Detail. Symptomatic of the growing phenomenon (for some) of decreasing attention spans, Kessler felt the need to repeat the same tabloid gossip throughout the book, stating the same points over again even in chapters that were devoted to other people. The effect such repetition had was to make the points seem like a personal attack on the political figure and not as an observance of a distant yet objective reporter. Kessler’s constant digs against Hillary Clinton:

“When in public, Hillary smiles and acts graciously. As soon as the cameras are gone, her angry personality, nastiness, and imperiousness become evident.”

end up having the reverse effect. There are only so many times one can compare Clinton to Cruella de Vil before the reader is going to say enough already and discount everything the writer was attempting to convey about her. Kessler’s tarnishing of Clinton backfired.

With such a secretive subject matter, it was impossible to get currently employed Secret Service agents to commit to their confessions with their names. Gossipy revelations about philandering presidents of the past won’t endear an agent to his or her employer. So Kessler was left with no other alternative than to credit his inside information to “an agent”, “another agent” or “a former agent”. With no names, the anonymous tipsters made The First Family Detail read like a supermarket tabloid. I can understand the need to protect the agents’ identities, but that didn’t help the way the book read. Yet again a revelation, and yet again, it was provided by “an agent”. Even the confessions of Deep Throat were presented more professionally and were written for an intelligent reader.

I shouldn’t have expected The First Family Detail to be a serious or even a significant read. If you had been stranded on a wireless island since Kennedy’s assassination then this book would have filled in all the gaps about presidential security lapses. Of all the topics to deal with in a book like this, the big one–Kennedy’s assassination–Kessler devoted only a part of the ten-page chapter entitled “Dallas” to it. Just a part–the chapter was in fact devoted to the four presidential assassinations in chronological order. And what new revelations can one possibly learn in the four pages about the Kennedy assassination? Absolutely nothing that we didn’t already know.

Kessler makes a repeated case for the serious state of underfunding that the Secret Service receives. Agents confess to the author how difficult it is to provide the utmost level of security to the most powerful people on the planet when their resources are continually being cut:

“‘We don’t have enough people or the equipment to do protection the way they advertise they do,’ a veteran agent says. ‘And how we have not had an incident up to this point is truly amazing–a miracle.'”

Kessler’s sources allege that the Secret Service is mismanaged by guys at the top who show no support for their agents. There is no extension of solidarity up the line. This is felt most often in cases where the person who is protected (the protectee) might request, or even demand, the agents to be less visible or even for the agents to disappear. Policy states that if the protectee makes these demands, the Secret Service will honour them. Yet agents who abandon the surveillance of a protectee are treated as insubordinates open to retribution. It is a lose-lose situation for these agents.

The First Family Detail provided a promising subject yet ultimately was a disappointment. What a tease for the publisher to put Jacqueline Kennedy on the cover yet Kessler barely even mentioned her. I was hoping to read about Mrs. Kennedy’s Secret Service coverage after the death of JFK, and how her own Secret Service protection had to end when she married Aristotle Onassis. The First Family Detail–not detailed enough.