The Genius of Birds 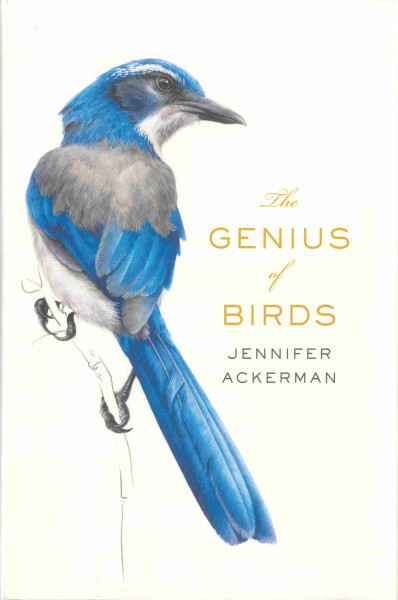 The Genius of Birds by Jennifer Ackerman was an analysis of avian characteristics. When we think of animal intelligence, all too often mammals come to mind. Yet the traits that some bird species possess surpass the abilities of most mammals, and that includes humans. Ackerman divided her book into eight chapters, each focussing on a specific trait, such as the ability to use tools, vocal virtuosity and spatial and temporal ingenuity. We are introduced to some specific species such as the New Caledonian crow, whose craft of hooks and tools from barbed pandanus leaves is unmatched in the avian intelligence of any species.

Some birds imitate human speech, such as parrots, while far more species imitate other birds. Even among birds that do not copy others, their own call must be learned by the chicks from their parents. Some species, such as the mockingbird, can acquire up to four hundred calls. Ackerman states that all birdsong is learned, much like a human parent will teach a baby how to talk:

“Johan Bolhuis, a neurobiologist at Utrecht University, remarks on how strange it must seem to an outsider for scientists to be comparing birdsong with human speech and language. ‘If we were looking for some kind of animal equivalent, wouldn’t we look to our closest relatives, the great apes?’ he asks. ‘But the odd thing is, so many aspects of human speech acquisition are similar to the way that songbirds acquire their songs. In the great apes, there’s no equivalent at all.'”

There are several theories about birds’ uncanny ability to navigate flight paths that are global in their range. How can birds, such as the arctic tern, travel from pole to pole and not get lost? I saw arctic terns in Iceland on the island of Grímsey and as far south as the island of Tristan da Cunha. How can any bird not lose its way going these colossal distances? Ackerman analyzed numerous test results which focussed on various areas within birds’ brains, their ability to sense magnetic fields, infrasound and even olfactory detection. She was left with a strong case that all of these sensory skills are needed in avian navigation. Science may have to admit that a bird relies on all of these skills of perception and not just on one. I did learn how flocks of birds coordinate their movements so that hundreds act in precise unison:

“We’ve since learned that the spectacular collective behavior of flocking birds (and schooling fish, herding mammals, swarming insects, and human crowds) is self-organized, emerging from simple rules of interaction among individuals. Birds are not ‘transfusing thought.’ communicating telepathically with their flock members to act in unison, as Selous surmised. Instead, each bird is interacting with up to seven close neighbors, making individual movement decisions based on maintaining velocity and distance from fellow flock members and copying how sharply a neighbor turns, so that a group of, say, four hundred birds can veer in another direction in a little over half a second. What emerges is almost instantaneous ripples of movement in what appears to be one living curtain of bird.”

Ackerman provided plenty of data compiled from both field and laboratory testing to back up her wondrous claims. She provided generous endnotes and her acknowledgements were filled with the names of experts in the field, so The Genius of Birds had the backing of science by scientists. It was presented in a style to appeal to all readers, even those without a background in bird knowledge. Although I prefer notes to have superscript numerals to indicate their ordered presence in the endnotes section, in this case it was smart to leave them off. The flow of the read would have been ruined had the eye been drawn to so many superscripts. I would have been obligated to refer to the back of the book each time. As it was, when I finished reading a chapter I thumbed to the end and read all of the notes so the antecedents were still fresh in my memory.