The Goldapple Guide to Jewish Berlin 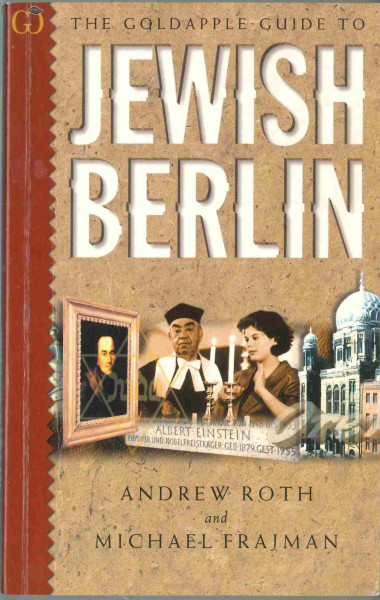 My library received a donation that it obviously could not use: a guidebook from 1998, and I was welcome to take it for myself. The Goldapple Guide to Jewish Berlin by Andrew Roth and Michael Frajman, while not one of the books I bought when in Berlin in 2010, is nonetheless part of my informal Berlin books project. It is a genuine travel guide, complete with restaurant listings, stores, information about synagogues, Jewish cultural groups and so on. There was even an entire chapter on Third Reich sites. I read Jewish Berlin like I do all books, cover to cover, even all the inserted advertisements. I wanted to learn about Jewish history in the city, and after all the tourist information the authors concluded their book with a lengthy 45-page chapter entitled “A History of Jewish Berlin”, going as far back as the first Jewish settlement in the thirteenth century. Alongside this chapter runs a timeline entitled “Steps to Destruction”, where one sees how month by month starting in March 1933, Jews’ rights and privileges were gradually stripped away: expulsion from schools; denial of library privileges; having their radios and telephones, even their pets, taken away; to not being allowed to leave their homes without police permission. It was a chilling read.

It is important to remember that this book was written sixteen years ago. Thus statements like the following are no longer true:

“It is only in the last 10 or fifteen years that government and civic groups have developed much enthusiasm to remember, mourn and admonish. Prior to that time, there was, at least in the western sectors, an avoidance of the subject of the German destruction of the Jews.”

Jewish Berlin covers why both sides of the Wall avoided this subject for decades, with mass national shame being a leading reason. In the eighties, near the end of the GDR regime, the East Germans seemed to make more of an effort to recognize their responsibility in the Holocaust by creating memorials. This however might have been done to curry favour with the west. After World War II, about seven thousand Jews were living in Berlin: 1300 had been living in hiding during the war; 1500 had returned from the concentration camps; and 4200 had been living as “privileged Jews” (a term used for Jews married to Gentiles or those who were members of certain government departments). The decision to remain in Berlin after the war was a controversial one. This is explained by the authors as early as page two:

“As before the Third Reich, Berlin has the largest number of Jews of any German city. As before, it has more synagogues than any other German city. As before, it is the headquarters to the major national Jewish organizations and home to many of the country’s most prominent Jews. For a community that just ten or fifteen years ago seemed to be slowly fading out of existence, it is a remarkable recovery.
“Not everyone thinks that this is necessarily a good thing. Many Jews feel that there is something wrong–something unbecoming, even slightly traitorous–about living in the land that gave birth to the Holocaust. Conversely, there are those who feel that a Germany free of Jews would be a posthumous victory for Hitler and that a Jewish presence here makes an important statement.
“This debate, important as it is, lies beyond the scope of a travel guide. It is enough for our purposes that there is a renowned past worth exploring and a fascinating present worth experiencing.”

I found it hard to believe that in 1998, bagels were practically nonexistent in Berlin:

“Despite its European pedigree, the bagel was next to unknown here until just a few years ago. Since then, this humble roll has experienced an explosion of popularity, and now the city is locked into a veritable battle of the bagels as a handful of cafés, restaurants and bakeries offer competing versions of this quintessential Jewish food.”

Jewish Berlin provided profiles of kosher as well as kosher-style restaurants and cafés. Since this guidebook is so old, check first before going anywhere.