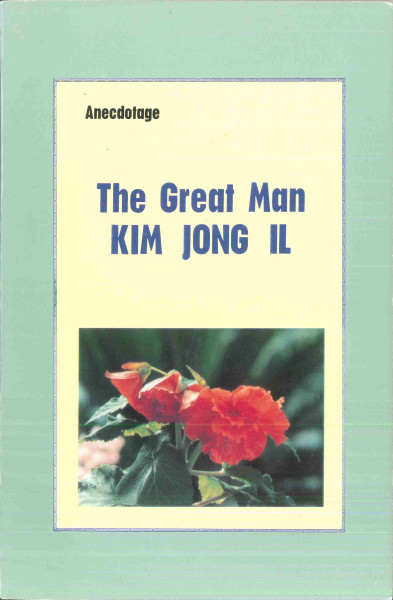 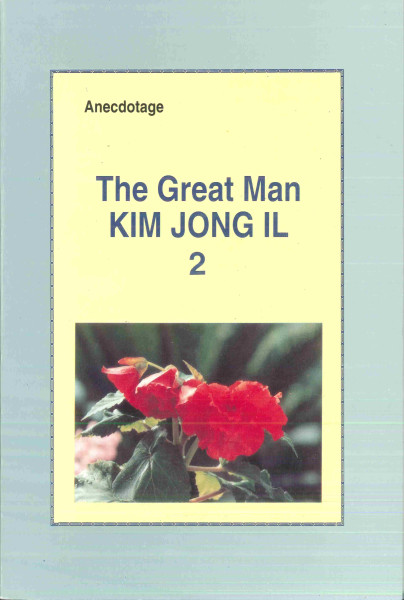 To pay tribute to the Dear Leader Comrade General Kim Jong Il after his untimely passing last December I read the two volumes The Great Man Kim Jong Il by Li Il Bok and Yun Sang Hyon and The Great Man Kim Jong Il 2 by Ri Il Bok. I believe the Boks who authored both volumes are the same person. I bought these when I was in Pyongyang. They are labelled as “anecdotage” and are collections of parables almost Biblical in nature based on themes with chapters such as Devotion; Love; Trust; Servant of the People; Our Way; Keen Intelligence; and Boldness in volume one and Art of Leadership and Devotion; Fidelity to the People; Love and Trust; and Obligation in volume two. All of the stories serve the same purpose of glorifying the dear Comrade Kim Jong Il, who is referred to by this honorific every single time his name is mentioned.

“Just at this moment the door of the operating room calmly opened and, surprisingly enough, the dear Comrade Kim Jong Il came in.The surgeons were amazed at the unforeseen occurrence, but felt somewhat relieved in his presence.”

It must be calming to an experienced surgeon to know that he is going to be watched over the shoulder by none other than the dear Comrade Kim Jong Il.

The dear Comrade often walks among his people in the Stalinist version of “Undercover Boss”. To go incognito,

“The dear Comrade Kim Jong Il walked among the officials in black sunglasses and simple attire, so no one could recognize him.”

This statement is incredulous. The dear Comrade Kim Jong Il’s portrait is plastered everywhere in North Korea, with him wearing sunglasses as well as without. The only people who would not recognize him are blind.

Both of these volumes are heavy on communist speak and the repetition of these terms only heightens their laugh factor. One story begins with the following passage:

“In August 1968 there was an unusually heavy rainfall in the east coast area. One afternoon when the dear Comrade Kim Jong Il who was giving field guidance to the work of South Hamgyong Province unexpectedly suggested visiting the Hamhung Disabled Soldiers’ Plastic Daily Necessities Factory.”

That mouthful, the Hamhung Disabled Soldiers’ Plastic Daily Necessities Factory, is repeated in full only six lines later. When the dear Comrade Kim Jong Il sees women selling their food in a private marketplace, he confronts one of them:

“When the crowd thinned out, he asked the saleswoman how much she sold a panful of soup for, where she got raw materials, what was the reaction of people, and when she began to sell.”

“The dear leader Comrade Kim Jong Il, endowed with unusual leadership skills, performs different tasks at the same time.His close coworkers unanimously admire the unusual wisdom and energy with which he carries on different work at the same time and does a lot of work in short time.
…
It was really impressive. Ordinary people can at most consider and settle one matter at a time, but he considered and arranged different complicated matters at the same time. He is really a great man.
…
His unusual thinking and energy astonish geniuses in the world.”

“Heartbroken, the dear leader kept calling his name.
‘Comrade O Paek Ryong, you must not die! Do you hear me?’
The patient’s daughter, overcome with sorrow, cried, burying her face on the breast of her father, ‘Father, why are you so still? Please open your eyes and see who has come. The dear leader has come.’
Even in hazy consciousness the patient seemed to have caught her cry that the dear leader had come. Probably this gave him superhuman power and made him open his eyes.”

The dear leader Kim Jong Il is truly a superhuman figure, and, like the title of the volumes claims, a Great Man indeed.