The Great Mortality: An Intimate History of the Black Death, the Most Devastating Plague of All Time 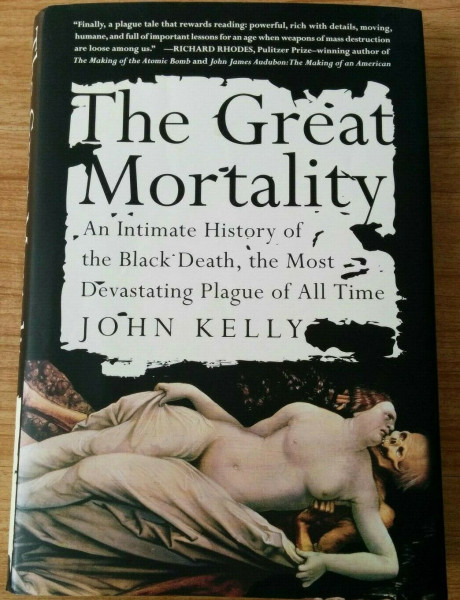 And so I come across The Great Mortality: An Intimate History of the Black Death, the Most Devastating Plague of All Time by John Kelly. The timing couldn’t have been better. This book was withdrawn from my library system because it hadn’t been borrowed in three years. I was allowed to take it and my personal rule is that all such no-circulation books are not allowed into my house. They are banished to the garage. And during this time of self-isolation while the library is closed I went into my garage to find cleaning supplies for my bike. What did I come across in addition to washrags, oil and old toothbrushes but this book, that I had totally forgotten about. I knew it was a must-read.

Kelly wrote an immediately accessible history of the plague from its Asian origins to appearance in Europe in 1347. For such a science-heavy history, with 37 pages of endnotes, I did not feel overwhelmed by tech talk nor was the writing polluted with sensationalism, for there is nothing like a horror story about millions of people moaning in pain to keep one reading. Thankfully the author did not resort to the ghoulish side of mass death to keep me interested when the science alone motivated me to turn pages.

The plague, carried by fleas found on rats in ships, got its foothold in Europe via Crimea. It then invaded the continent over the next three years, killing over one third of the population. We travelled with these rats and fleas as the disease made its way across Europe. There is evidence for two kinds of plagues that afflicted the European continent at this time: both a pneumonic and a bubonic variety. The former, with its ceaseless bloody cough, had the power to kill a person within three days while the latter exhibited the grotesque symptom of protruding buboes. People died en masse and villages were wiped out. Theories of contagion were still unknown and transmission was believed to occur via poisoned water, tainted air or by some astrological alignment. Since entire families were known to perish within mere days (only possible with the pneumonic variety) family members were afraid of one another for fear of catching the mysterious disease next:

“Of the plague’s divisive effects, Boccaccio writes, ‘It was not merely a question of one citizen avoiding another;…this scourge had implanted such a great terror in the hearts of men and women that brothers abandon brothers, uncles their nephews, sisters their brothers, and in many cases, wives deserted husbands. But even worse, and almost incredible was the fact that fathers and mothers refused to nurse and assist their own children, as though they did not belong to them.'”

One reason which led me to award this book five stars was Kelly’s evocative descriptions. Imagine being part of a family and suddenly hearing your brother start coughing:

“Residents were quick to recognize the uncontrollable cough of pneumonic plague, the violent, spasmodic tattoo that threw people against walls or doubled them over in the streets, left chins and shirtfronts stained with bloody mucus, and produced a rattling noise in the lungs that sounded like a heavy iron chain being dragged across cobblestone.”

No wonder family members abandoned one another. Once they heard that first cough, they knew it meant immediate death.

I recalled the news reports about the mass coronavirus graves on New York’s Hart Island when I read what Boccaccio wrote next:

“Such was the multitude of corpses [that] huge trenches were excavated in the churchyards, into which new arrivals were placed in their hundreds, stored tier upon tier like ships’ cargo, each layer of corpses being covered with a thin layer of soil till the trench was filled to the top.”

Kelly quoted other historians who, at the time, described the corpses being laid to rest in orderly rows like a plate of lasagna. The author thus provided some Italian culinary history, dating that specific pasta dish to at least the fourteenth century.

The Black Death occurred during the brief period of the Avignon papacy and Kelly could not ignore the effect religion had on the interpretation of the plague. The laity was abandoned after so many clergymen died. Prayers went unheeded and thus the church proved to be just as ineffective as doctors and astrologers in trying to stop the carnage. It is no wonder that an increasing disillusionment with the church developed after the plague. The changing nature of the papacy to a “pay”-pacy didn’t help, and I couldn’t suppress a chuckle when I read this favourite passage from the book, below:

“The most damaging aspect of the Avignon papacy, however, was its utter lack of moral seriousness. Clement V and his successors transformed the Church into a spiritual Pez dispenser. The fertile minds at the curia had managed to create an indulgence for every imaginable situation and every imaginable sin. For a price, an illegitimate child could be made legitimate, as could the right to trade with the infidel, or marry a first cousin, or buy stolen goods.”

The Great Mortality was the term used during the time which we now refer to as the Black Death. It is also the title of a book which was riveting as well as frightening, especially if precautions are not taken to slow the spread of the current disease ravaging the world. Seven hundred years ago no one knew about transmission or quarantine. We have that knowledge now, and must not plunge into blackness forsaking centuries of science.