The Hermit of Africville: The Life of Eddie Carvery 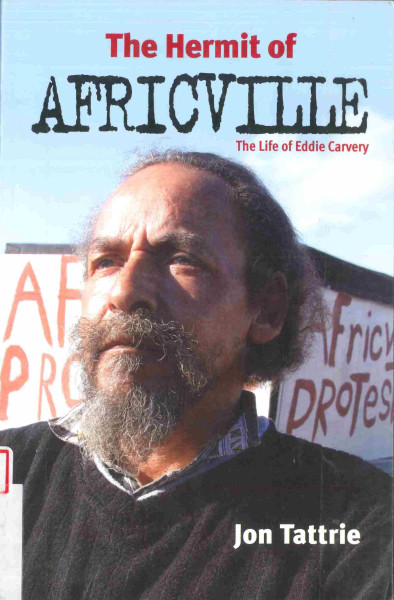 The Hermit of Africville: The Life of Eddie Carvery by Jon Tattrie is the second book on Africville that I have reviewed. I saw this book when I was in Halifax over the Christmas holidays, and obtained a copy through my library system’s interloan service. Eddie Carvery grew up in the Africville community of Halifax and watched as the entire settlement was razed in the 1960’s as part of a government renewal campaign. Families were forced out and their homes and their businesses were destroyed. Everyone left…except Carvery. He refused to be evicted from land that had been deeded to the Africville community. The last resident (who had a proper house) was forced out in 1970, yet Carvery himself never left, spending the next forty years living in tents and motor homes. During those four decades Carvery tried to settle down by getting married and having children, yet he could not cope with life outside Africville. The traumas of seeing his world being bulldozed before him and losing the intimate bonds of friends and family led him to a lifetime of alcoholism and drug addiction. Carvery spent little time outside of his home community, and always returned to the place of his birth, even if it meant camping in the middle of winter:

“Eddie Carvery still lived in the buried graveyard of his childhood. Before the last Africvillian left, Eddie was there, sleeping rough, sleeping in borrowed spaces, sleeping in tents and campers, transforming from a low-level crook, drug addict and wife-beater into the world’s most stubborn political protester, a poor man’s Nelson Mandela taking a long walk to an uncertain future with no one holding candles outside his prison door.”

Hermit was a slight biography of 74 chapters spread thinly over 206 pages. It was a fast read when any chapter could be read in a matter of minutes. The narrative sped along; it was accelerated in places and cut through years of Carvery’s life. This is expected if Tattrie had to cover 64 years in so few pages. Some of the stories Tattrie told defied belief. I didn’t buy the numerous occasions where Tattrie and his brother, hospitalized and hooked up to IVs and tubes, would just rip everything out of their arms while alarms were ringing and then skip out without so much as a concerned doctor or nurse entering the room. Tattrie also committed the unforgivable error by misspelling Ghandi [sic].

Throughout Carvery’s forty years in Africville, which has long since been redeveloped as a public park, he had been threatened with arrest and eviction, but authorities never threw the book at him. Carvery was also portrayed as a smooth talker who could make the police look the other way. Yet in spite of his years in Africville, protesting the unfair eviction of his community and calling for reparations, forty years passed by before the Halifax Regional Municipality issued a formal apology in 2010. Reflecting on the decades he had spent standing his ground in Africville, Carvery admitted:

“‘I feel that my life that I spent out here on this protest, it’s been such a waste of my life, because I’m looking around and saying, who benefited? What did I accomplish? And to me, I didn’t do what I wanted to. I didn’t do what I set out to do, never even come close,’  he sighed, staring at his hands. Uncelebrated, unwritten, unsung, but unbending.”

After the formal apology to the citizens of Africville, Carvery’s protest was not entirely in vain. The long promised reconstruction of the Seaview United Baptist Church, razed in the middle of the night in 1969, was finally completed in 2012.