The Impossible State: North Korea, Past and Future

I have read many books about the Democratic People’s Republic of Korea yet The Impossible State: North Korea, Past and Future by Victor Cha does the best at explaining why the country behaves the way it does. Unlike many authors about the DPRK, Cha is authoritative and unbiased without pandering to sensationalism. Cha is the former Director for Asian Affairs at the National Security Council where he served as an adviser to President George W. Bush from 2004 to 2007. The Impossible State was a solid 530 pages of text printed with narrow margins and heavily supplemented with 38 pages of endnotes. It took me almost three weeks to finish this book, which I consider essential reading for anyone wanting to understand North Korea, the impossible state.

How can the DPRK survive today? How does such a belligerent nation do what it does without fear of getting bombed into oblivion? The DPRK is a grade-school bully who has no friends yet whose parents still make him go to class. What would happen, however, if the People’s Republic of China, North Korea’s “mom and dad”, decided to disown their bully son?

“The problem today is that China is both omnipotent and impotent in North Korea. It has great material influence as the North’s only patron. Yet, as the sole patron, if Beijing shut down its assistance to punish Pyongyang for its bad behavior even temporarily, it could precipitate an unraveling of the regime, which would be even more threatening to China. Beijing has no metric by which to gauge how much pressure is enough to punish versus too much pressure that could lead to collapse. In the end, this dilemma typifies the mutual-hostage relationship: Beijing needs to keep the regime afloat, even though it hates the rigid ideology and costs to China’s international reputation of being seen as a patron. Yet it cannot use its leverage, for fear of collapsing the regime like a house of cards. North Korea knows this, and therefore uses its vulnerability and unpredictability to get what it wants from China. It hates China’s predator economic policies, but has little choice in the matter because it needs the hard currency.”

The DPRK thus has its sole lifeline–the most populous and among the most powerful nations on Earth–wrapped around its finger and knows just how to control it. The way to do this is to flash the nuclear card. The North has the world’s attention whenever it threatens to launch a missile or conduct an underground nuclear test. Nothing makes its greatest enemy, the United States, or its mainland Chinese benefactor know who’s boss than to have both of them quivering at the thought of North Korea having the bomb. At the time I publish this book review, the news has been less intense in its reporting of DPRK nuclear threats. Why has the DPRK left the front-page headlines all of a sudden? I fully believe that the DPRK toned down or otherwise ended its threats once it realized that the USA suddenly had a much more newsworthy–and tragic–story: that of the Boston Marathon bombings. When the Boston story hit the wire, it was almost as if the American media felt that the DPRK ceased to be worth writing about.

During the time that the DPRK held us all captive by its threats to turn Seoul into a sea of fire, political pundits on TV and in the press wondered about the Supreme Leader Kim Jong Un’s sanity. Was he a boy playing not with toy guns, but the real things? Were his advisers suicidal nutcases, “saving face” in the eyes of their citizens by getting themselves bombed off the map? In all of this talk, this rhetorical fire-breathing, there isn’t a doubt in my mind that the North knows that it is just spouting empty threats. The DPRK is not ruled by a child with an overeager trigger finger and his sycophantic yes-men. Yet the question of the leader’s sanity and rationality persist. Cha writes:

“In particular, there are two things that worry me. The first is North Korean rationality. I don’t mean this in the sense that they are crazy. On the contrary, though the caricatures of Kim Jong-il as the ‘plutonium madman’ color the public commentary of North Korea, I believe the leadership, whether it was Kim Jong-il or today, centered around Kim Jong-un, is eminently rational. They may be misinformed about the outside world, but they are rational. The fact that conventional deterrence has held indeed offers evidence of a degree of rationality in Pyongyang. But what is concerning is that sometimes even rational actors, when they become especially stressed, can do dangerous things. That is, countries, when pushed into a corner, have a tendency to lash out rather than whither away. This does not mean they experience a bout of insanity; rather, it becomes perfectly rational to contemplate a desperate action.”

I however do not believe that the DPRK will lash out–ever–for lashing out would be suicide. They have pushed the envelope over and over again though, sinking South Korean submarines and fishing vessels and shelling Yeonpyeong Island. Why does the DPRK do this? Aren’t they afraid that the South or the US would retaliate?

“Why do these provocations happen despite the fact that deterrence against DPRK aggression has held since 1953? What worries me in this instance is not the failure of conventional deterrence but that the North, once again, may have made the rational calculation that violence pays.”

The formula is quite simple. Is our country starving and freezing? Yes. Fire off a missile. Promise to stop if we get food and fuel. Repeat.

This has been the North’s strategy since day one, and for the first time, The PR of China is getting antsy. It alone has the power to slap Kim’s hand and make him stop.

If mainland China threatens the DPRK with economic sanctions (and means it), or cuts off shipments of food and fuel, the DPRK will collapse. The country simply cannot sustain itself. It will starve and freeze to death. Another scenario that will lead to the dissolution of the DPRK is reunification. In the North, reunification is championed as the destiny of the Korean people, where everyone will join together across the peninsula living once again as one people. The only thing they don’t tell you is that reunification is fine, provided it’s under their rule. A reunified Korea under Kim Jong Un will never happen and the North knows it. Thus maintaining the antagonistic status quo is their entire raison-d’être. Cha feels that the reunification of the Korean peninsula will come as soon as the next American presidential administration:

“The final discourse on unification that I describe above is not naive. It harbors no false expectations that unification somehow has become an easier task. I believe all Koreans understand how difficult the task will be. It is not likely to come gradually, as Sunshine Policy advocates wish. It is probably more likely to come suddenly.”

Cha is to be commended for his balanced analysis of DPRK political machinery. Most other accounts I have read count down the seconds to when the North will self-immolate. Cha expresses some trepidation but is not convinced that the DPRK will blow itself up in order to deprive its enemies of doing it themselves. The Impossible State was a slow but careful read because I analyzed every statement and claim Cha made. Since I had visited the DPRK myself I could compare my experiences with Cha’s. I maintain that The Impossible State is a must-read for any in-depth analysis of the DPRK and its internal and foreign policies, yet it was not bereft of errors. Aside from the rare grammatical error not caught in proofreading, like having a “that” for a “than”, I noted several genuine mistakes:

The Eternal President and Great Leader Marshal Kim Il Sung was born in 1912. Cha’s statement below leads one to believe that he was born in 1902:

“Here is the real story. Kim Il-sung was born as Kim Sŏng-ju. He was a Christian, not a Communist. What is significant about his birth date (aside from being the same day that the Titanic sunk) is that this was only twenty years after the 1882 treaty of amity and commerce with the United States, which paved the way for Western missionaries to come to the peninsula.”

The North Korean calendar was re-created after the death of Kim Il Sung. Doing away with the Christian system of numbering years since Christ’s birth, the DPRK recalibrated the method of counting years, starting anew from the birth year of the late President:

“After a period of mourning, Kim Jong-il passed an amendment to the Constitution in 1998, declaring Kim Il-sung the “Eternal President” of North Korea. He built a massive mausoleum, in which Kim is entombed. He declared a new calendar, in which Year Zero is 1912, the birth year of Kim Il-sung (hence, 2012 is 100 after-the-birth-of-Kim), and April 15 is basically Christmas in North Korea (except the kids don’t get presents).

Cha is wrong here. In the Juche calendar, there is no Year Zero. 1912 became Year 1, thus 2011 became Juche Year 100. I have the DPRK store receipts to prove it (and one even conveniently marked with both year systems: 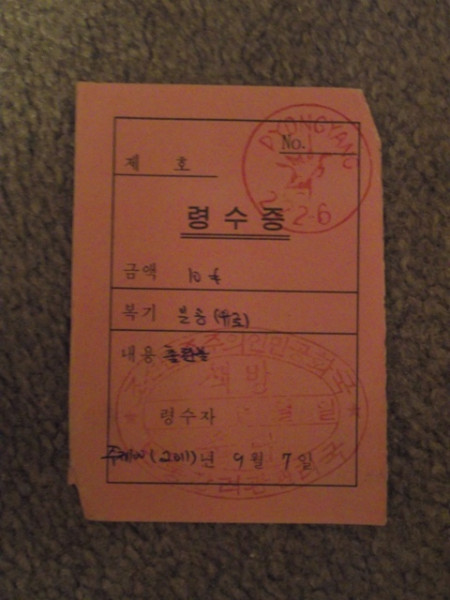 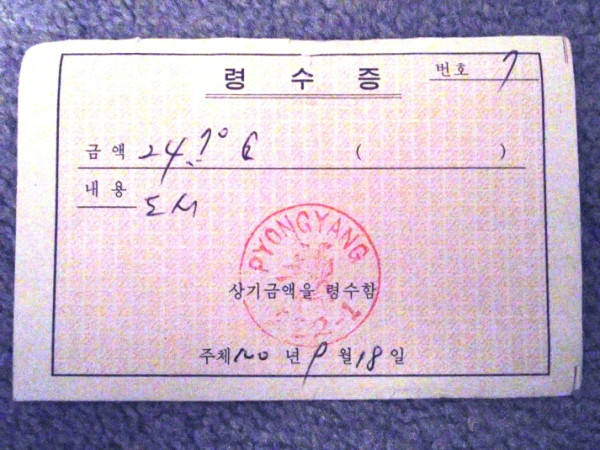 In Cha’s description of the Dear Leader Comrade General Kim Jong Il as a filmmaker, he compares the late general to Martin Scorsese, yet he misspells the director’s surname as Scorcese.

Cha alternated using the terms half-brother and stepbrother to refer to Kim P’yong Il in his relation to Kim Jong Il. The fact is that the two men share the same father, Kim Il Sung, so they are half-brothers, not steps. This was most confusing, trying to keep all the Kims separate and all their remarriages and children born of them in order. Even the index has it wrong: Kim P’yong Il is listed as “step-brother of Kim Jong-il”.

The North Korean city of Sinuiju borders Dandong, PR China across the Yalu River. Sinuiju is thus in the far west of the DPRK. Cha errs with this statement:

“Being unable to perform hard, physical labor, she was also tasked with taking care of pregnant women in the detention center in Sinŭiju in eastern North Korea.”

While I believe that Cha wrote about the DPRK without wanting to put it down with insults at every opportunity, I found the following statement to be the only fly in the ointment of unbiased observation:

“Outside the city, farmers use old and diseased oxen to till the land; there is no mechanization visible. The paved roads, despite their infrequent use, are cracked and potholed to the point that they would even make riding a bicycle difficult.”

Oxcarts to till the land? Definitely, as I myself saw, yet was prohibited from photographing (until one just happened to cross my path):

But old and diseased? Was that remark necessary? And as for the potholed roads, Cha is bang-on. Racing along in a bus as the only vehicle on the roads on the outskirts of Pyongyang was like riding a roller coaster without a safety harness. I had never experienced more badly-maintained paved roads than in the DPRK.

The Impossible State proved itself twofold: the DPRK is impossible in the sense that it should never have been allowed to exist this long after suffering its people for over six decades. Look at the former communist states of eastern Europe. Look at the Arab Spring. How is it that the DPRK has been able to survive a people’s revolution? The DPRK is also impossible in the exasperated sense of coping with a belligerent and naughty child. Cha has written a valuable book that looks at North Korea under the helm of a young and inexperienced new leader, and I highly recommended it.