The Islamic Veil: A Beginner’s Guide 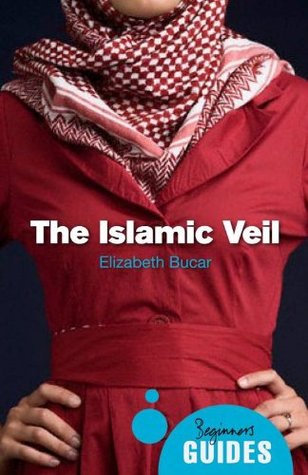 I wanted to learn more about veiling, or the wearing of hijab by some Muslim women. Some women, though, prefer to wear a niqab, which covers the entire face, leaving just a slit for the eyes. The Taliban regime in Afghanistan mandated the overall coverage of the body with the burqa, which left only a mesh patch to see through. For western non-Muslim male readers such as myself, these may be the three main articles of apparel for Muslim women that we have heard of, but in The Islamic Veil: A Beginner’s Guide, the author Elizabeth Bucar talks about others, and what women in countries that are predominantly Muslim tend to wear. The terms for these garments vary as well, and the same term can refer to a different article of veiling in a different country.

Bucar divided her book into chapters, each one focussing on the various reasons behind the wearing of the veil. She concentrated on the sacred texts in the Koran and hadith that support this practice, but even then, the mandatory wearing of the veil is still open to interpretation:

“The Qur’an and hadith simply do not give a definitive answer to some of the most basic questions about the veil. Sacred texts, because they require human interpretation of divine revelation, turn out to be a source of confusion, not clarity.”

One of the main functions of veiling is:

“The concern is with the protection of bodily integrity of Muslim women, in verse 33:59. The veil here protects women from unjust sexual harassment and assault when they are outside their homes.”

The choice of veil varies by region, and is determined by culture or politics. Iran and Saudi Arabia have laws that enforce the wearing of the veil, while other Islamic countries have a greater freedom of choice, such as Indonesia, home to more Muslims than any other country. In Indonesia, the interpretation of sacred texts focusses more on the idea of coverage, but not on the concealment of the female form. Bucar devoted her final chapter to the topic of the veil as fashion item, where Indonesian muslimahs have the most diverse range of hijabs and dressing techniques than are available to Muslim women in other countries. As long as the major concern is with head and hair coverage and not bodily concealment, Indonesian women are free to wear belts, skinny jeans and colourful or patterned hijabs. Yet isn’t there a conflict of interest regarding the original or sacred intention of wearing hijab?

“Indonesian women’s quest to find a flattering veiling style raises an interesting question: is there a conflict between dressing fashionably and Islamic dressing? In other words, can or should wearing an Islamic veil actually increase the beauty of the woman? And if it does, is this in conflict with the veil’s legal mandate to prevent fitna (sexual disorder) by covering a woman’s ‘awra (‘vulnerable’ body parts)? Or even worst [sic], as the veil becomes a fashion trend in and of itself, is false veiling possible, where women choose to veil only because it is trendy?”

Yet one does not have to look only to Indonesian muslimahs to see conflicts of opinion over the Islamic veil. Why are many young women deciding to wear the veil today, when their own mothers did not? Immigrant women may have felt liberated from having to veil, and upon arrival in their new home country they abandoned it. They no longer felt constrained by repressive laws that penalized them for going outside without the veil. Yet new generations of muslimahs feel more comfortable in their new (and perhaps only) home countries. Younger women who are educated and professional are taking up the veil, yet not without controversy:

“What is confounding, even to many Muslims, is that many newly veiled women are educated, urban, and career oriented. They choose to take up the veil over the objections of their families, marking a generational divide. For these women, the veil is more than mere clothing. It becomes a type of portable gender seclusion and thus enables entry into the public sphere, not withdrawal from it. These women challenge both the liberal secular idea that the veil is an obstacle to women’s advancement and the conservative Islamic idea that veiling is tied to women’s domestic seclusion.”

Bucar raises valid points about the resurgence of the veil during colonialism. Women who had never veiled before started to cover themselves as statements of nationalism and anticolonialism. One perspective that saddened me was that of the veil drawing unwelcome attention to Muslimahs as threatening targets:

“As such a complex cluster of practices, discourses, and politics, the Islamic veil inevitably entails internal tensions and paradoxes, and thus leaves room for disagreement. For some, the veil is a signifier of women’s oppression by men, but for others it is a feminist choice. In classical thought, the veil’s purpose is to protect women from the male gaze, and yet in contemporary practice it often increases the visibility of Muslim women, especially those in Muslim minority settings. Paradoxes even occur within the same specific instance of veiling. A veiled working-woman, for example, may find herself simultaneously affirming the values of both gender equality and sexual segregation. A woman may claim the veil prevents her from being objectified as a woman, yet find herself objectified as a fundamentalist once she puts on the veil.”

A very good point from Bucar at the end of that quotation. The Islamic Veil served as a valuable introduction for me as a non-Muslim, especially in regards to the references to the veil in the sacred texts. Bucar analyzed the verses and compared interpretations and translations to show that there is a wide range of opinion about whether the texts state that women should even be veiled at all. Women’s identity and how it relates to feminism as well as employment, education and fashion are all covered in their own chapters.