The Last Resort: A Memoir of Mischief and Mayhem on a Family Farm in Africa 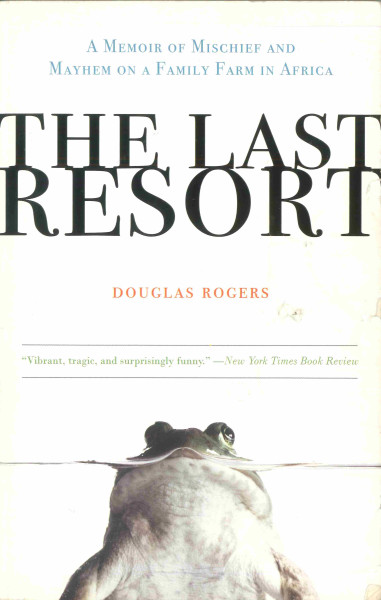 The Last Resort: A Memoir of Mischief and Mayhem on a Family Farm in Africa by Douglas Rogers was recommended to me by Mark. I have not read a book that was personally recommended to me in years. I usually have so many of my own books to read, or get them from my library, that I have ignored any titles that others may have recommended. The Last Resort tells the story of the author’s parents and their resort in Zimbabwe at the time when the Mugabe government was expropriating farms owned and operated by white farmers. Rogers, born in Zimbabwe yet living in London, wrote a personal and detailed account of the government’s encroachment upon his parents’ property. Rosalind and Lyn Rogers, both born and raised in Zimbabwe, operated Drifters, the name for their home and backpacker lodge located in Mutare in eastern Zimbabwe near the Mozambique border. Douglas made frequent trips to Drifters and saw the ominous signs of governmental interference with each visit. Little by little the lodge was taken away from them, from the type of tenants who occupied the cabins to the sort of “business” operated within. Irony of ironies is that Drifters was not even classified by government inspectors as a farm, as it had no arable land. It was a money-making resort which was exempt from expropriation. Drifters was famous enough to have been written up in the Lonely Planet travel guides.

In spite of government assurance that their property would not be expropriated because of its designation as non-farmland, Ros and Lyn were always prepared for a visit from the authorities and kept a rifle by their bedside. They did not live in fear, however. They went about their day-to-day business even while neighbouring farms were taken over or their farmers were attacked. They allowed the greenery around their resort to grow wild and untrimmed in order to hide it. The Rogerses never accepted whatever whimsical policies or characters the Mugabe regime sent their way. All too often they were met with a cloud of personless bureaucracy whenever they needed to talk to someone. Typical of Zimbabwean bureaucracy in the age of Mugabe was the endless runaround or goose-chase the farm owners had to contend with. The plight Ros had to endure to renew her passport will leave you with multiple eyerolls paired with bursts of exasperated laughter. Throughout this entire ordeal Douglas kept the laughs coming. You’d never think that a son, whose parents could face immediate eviction from a nighttime raid, would find anything funny in the matter.

Douglas outlined the reasons behind Zimbabwe’s hyperinflation when the government simply printed more money in its attempt to deal with the economic crisis. He made the story of the country’s economic meltdown seem suspenseful and appealing. The national treasury printed banknotes in higher upon higher denominations, and the economy fell further into chaos. Ros Rogers wrote to her son:

“‘I thought we had reached the bottom, but the elevator keeps going down,’ Mom wrote to me. ‘We are passing the basement now. Nevertheless, it is quite exciting to watch. You never know what a new day will bring.'”

Ros and Lyn had an incredible sense of resilience to feel this way. They never felt defeated as Drifters drifted into the hands of prostitutes, pimps, diamond miners and drug dealers.

After I read this book I contacted the author via his website. The site featured dozens of colour photos of all the people in the book, including many of Ros and Lyn Rogers, as well as Drifters and the surrounding property. In my E-mail to Douglas I asked about his family and the state of Drifters. I am sad to say that in the preceding week, while I was still reading The Last Resort, Ros Rogers had died. Douglas had just visited his mother and father in Mutare. He told me that since the publication of The Last Resort, his parents had become quite famous and received many visitors, however Drifters has since closed. I love to reach out to authors when their books move me and the Rogerses’ struggle against adversity will leave you feeling empowered among gales of laughter. I am truly saddened to hear of the death of Rosalind Rogers.