The Last Romantics has been edited 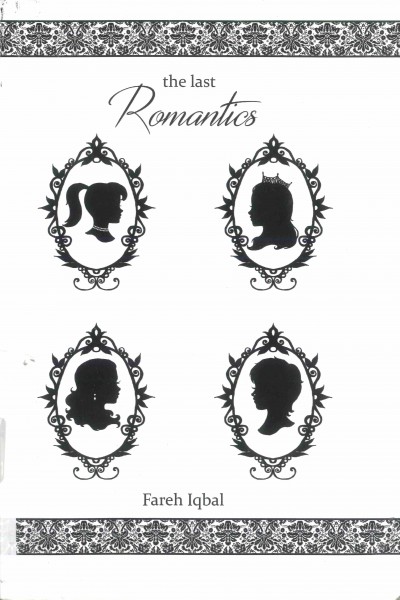 My original review of The Last Romantics was posted on 10 October 2016. Fareh Iqbal produced this semi-edited edition less than a month later on 7 November. The following is a report on the editing job. Changes to the text are marked in red while mistakes left in remain in black.

When I first read The Bookkeeper’s Daughter I made a note, but did not comment on it in my review, that the protagonist Ray Driftwood sure did an awful lot of sighing. Breath was expelled so often that I thought Ray would pass out. I noticed the same propensity for sighing in the next two novels. By the time I picked up The Last Romantics, I thought it would be interesting to track how often the characters sighed. Each time someone sighed, I’d record the page number. I was strict in my count; Iqbal also employed verbs such as exhaled and breathed but I only tracked the number of times characters sighed. In a book of 246 pages, the four leading women were breathless after sighing on the following pages: 5, 33, 40, 56, 59, 75, 85, 94, 96, 109 (twice), 128, 143, 154, 160, 161, 165, 174, 192, 197 (twice), 214, 218, 219, 220, 221 (three times), 226. An editor would suggest other ways of expressing exasperation, contentment, concession or any of the myriad other feelings in ways other than by always sighing.

–I did not check any of the above references to see if Iqbal substituted other words for sigh or any of its inflections.

This story takes place in Paris and the French in the text should have been vetted by a native speaker or at least a fluent speaker first. The following are the faux pas en français:

Repeated references to William as the fiancée of Jordan (pp. 49, 182 and 192, among others). This is the feminine form. For men about to be married, use fiancé.

“It was known as Place de Revolution.” (p. 65). It should be Place de la Révolution.

–now Place de la Revolution yet without the acute accent.

“…merrily humming along to Edith Phiaf.” (p. 70). Her surname is spelled Piaf. I myself do not like to render accents on French capital letters so I congratulate Iqbal for not writing Édith.

–unchanged. I must have missed an earlier misspelling as Phiaf also occurred on p. 66. Iqbal must know the correct spelling, for she spelled it as Piaf in Fernweh on pp. 205 and 226.

A reference to the French dish duck l’orange (p. 77) when the correct term is duck à l’orange.

–now duck à l’orange yet the à, a later insertion, was not rendered in italics.

Repeated references to the cookie macaroon (p. 84, but I did not record its occurrences elsewhere) when I am certain Iqbal meant the decidedly French confection called the macaron.

–now changed to macaron(s) on pp. 84 and 160. I did not check for any other corrected references.

–now “…and that French je ne sais quoi..” yet followed this time by two periods.

Usage of the term toute de suite, when the correct spelling is tout de suite.

–Since I did not record the page reference I am not able to confirm if this was corrected.

–The first reference was altered to s’il vous plait, which added the apostrophe but still left off the circumflex.

“Comprendez?” (p. 199). The correct form of the conjugation is Comprenez.

A reference to Sacré-Cœu on p. 216 instead of Sacré-Cœur. Bonus points for employing the œ ligature, though.

French gaffes now over, here are my notes about the rest of the text:

–The spelling pajama remained unchanged on p. 1, yet has now been changed to pyjamas on pp. 149 and 156.

Ray Driftwood runs a bookshop yet it is alternately called a bookshop as well as a book shop. On p. 7 both terms are used. Her store is located in England where the pound sterling is the official currency but early in the book Ray conducts a book transaction using euros.

–now rendered as one word, bookshop, on p. 7. The book transaction still occurred using euros, a word which Iqbal mysteriously chooses to capitalize as Euros throughout each of her works.

“The past two years been particularly wonderful for Ray who had finally published her novels.” (p. 9).

–now “The past two years had been particularly wonderful for Ray who had finally published her novels.”

“…she was nimble enough to climb on top of counters to reach high shelves. shelves.” (p. 21). Erroneous repetition.

–now “…she was nimble enough to climb on top of counters to reach high shelves.”

I rail into authors who render the possessive form of it with an apostrophe S. I have never encountered the opposite of this grammatical gaffe, namely employing the contraction without the apostrophe. Iqbal committed this fault on pp. 36, 67, 139 and 173 (twice). On p. 74 the S is missing, as in “It’ pretty public, right down to the lingerie.”

“If that’s what you kids are calling it these day…” (first word in the original text in italics; p. 46)

–now “…which at first glance looked as though it was embedded…”

“Jordan pointed to Ray with a long finer adorned with a stack of gold rings.” (p. 45)

–Jordan is still pointing with a long finer.

“I’ve become of those girls that are entirely too comfortable…” (p. 73)

–now “Jordan’s face was bathed with a golden glow…”

–now “All we have to do is look close enough and recognize them.”

–now “I don’t think people made rules, per se.”

“T-thank you” (p. 148) should have been rendered as “Th-thank you” to represent stuttering.

There are some grammatical errors that make me livid. I encountered two such travesties on opposite sides of the same page:

“…Jax yelps, almost spilling her tea all over Sophie and I” (p. 153) and “…William calls once more to a chorus of goodbyes from Jax, Sophie and I” (p. 154). In both cases the pronoun that follows the prepositions (over and from) must be in the accusative, thus me. Write the same sentences without Jax and Sophie. How would you write the first one? Would you write “…Jax yelps, almost spilling her tea all over I“? Would you? Of course not. You’d write it using the pronoun me, which is also the correct form of the pronoun in the second sentence.

–Both sentences now employ the pronoun me.

–now “Squinting, I examine it closer, it’s a picture of Jordan and me…”

“…I can do nothing but offer words of compassion that roll of her shoulders…” (p. 160)

It was at this point in my notations (after page 160) that I remarked, after making a mental note of it throughout the book, that Iqbal always capitalized the four seasons: Spring, Summer, Fall, Winter. Why?

I did not check to see if any of the seasons were now spelled in lowercase.

I found fewer run-on sentences in The Last Romantics than in Iqbal’s three previous books. A sentence does not have to be long in order to be considered a run-on; the example above beginning with “Squinting” simply needs a comma after the first word.

–now corrected with the addition of the comma

Without it, the words pile up like a car crash when the first punctuation mark is encountered. A lack of punctuation forces the reader to start the sentence over, which ruins the flow of reading and puts the distracted reader on alert for when to mentally insert missing commas. I bypassed many run-on sentences when they only required a single comma for proper punctuation, but the example below could not escape my criticism. Please, divide it into several sentences:

“My mouth waters as William carries out the chicken on a platter, followed by Jordan with the pizzas arranged artistically on a pale yellow tray, I trail behind with the salad bowl and as I hear Sophie’s squeal of delight and Jax’s yelp of surprise as she pops a pizza in her mouth too soon, followed by William’s deep laugh and Jordan’s plea for everyone to settle down so we can still catch the fireworks at the Eiffel Tower in the evening, I feel warm contentment flooding in my veins, the dull ache in my heart temporarily forgotten.” (p. 151)

–now punctuated, but poorly, as: “My mouth waters as William carries out the chicken on a platter, followed by Jordan with the pizzas arranged artistically on a pale yellow tray. I trail behind with the salad bowl and as I hear Sophie’s squeal of delight and Jax’s yelp of surprise as she pops a pizza in her mouth too soon, followed by William’s deep laugh and Jordan’s plea for everyone to settle down so we can still catch the fireworks at the Eiffel Tower in the evening, I feel warm contentment flooding in my veins. The dull ache in my heart recedes and is temporarily forgotten.”