The Last Speakers: The Quest to Save the World’s Most Endangered Languages 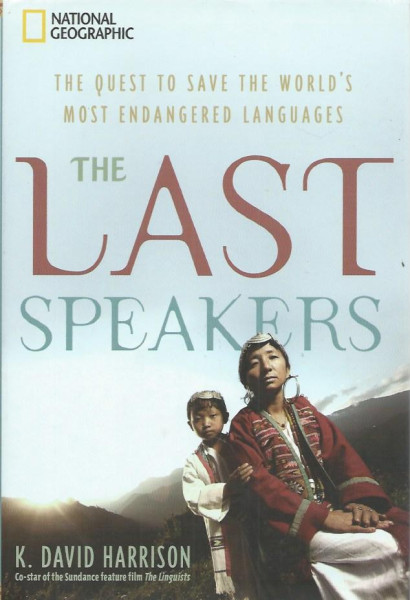 I saw The Last Speakers: The Quest to Save the World’s Most Endangered Languages by K. David Harrison while visiting a public library during a visit last month to Los Angeles. I noted the title and requested it via interloan when I got home. The fabulous dedicated staff of my library system’s interloans department found the book–and I had it in my hands–within four days of my original request. Talk about speedy service.

My armchair education experience involves studying endangered languages, specifically European. Aside from reading about many of these languages, I have spent several years studying two of them in the places where they are still spoken as an everyday language: the Sursilvan idiom of Romansch in southeast Switzerland and Breton in Brittany. My eye was drawn to The Last Speakers and although its focus was on languages from central Asia and Siberia, South America, and the indigenous languages of North America over those in Europe, it was still a must-read. Language extinction–and its more dramatic synonym, language death–can get me more worked up and emotional than learning about the extinction of an animal species. With a team of linguistic and audio specialists, as well as the all-important local guides, Harrison embarked on journeys to document the most endangered languages on the planet. He travelled to all the places where these severely endangered languages were still spoken. His treks to some western Mongolian and Siberian towns could fill books of their own.

I am glad to learn that Harrison didn’t invade elders’ homes only to stick microphones in their faces under the command to talk. With the help of locals he earned their trust and then tried to capture their speaking patterns in as natural a setting as possible. Studies have shown that regardless of who is being recorded, people tend to talk more formally and thus artificially if they know that a scientist is recording them. What Harrison has discovered in cataloguing the dying vocabularies of the elders is the panoply of knowledge that is at risk of disappearing forever. These endangered languages are in many cases not written languages, and when the last speakers die all that the language encompasses dies with them. The oral tradition–which existed in all languages before the creation of writing systems–would cease to be passed on to further generations and the language would indeed die:

“Listening to the elders, I am astonished by how little we know and how vast human knowledge is. We find ancient systems of knowledge–in many cases more sophisticated than what modern science knows–about the natural world, plants, fish, weather patterns, sea ice, and landscapes. We find amusing stories of reindeer, bears and fishes, weather patterns and stars, healing plants, mythical yeti-like beasts, and world-creating ducks. In short, we find a mental catalog of mankind’s attempts to make sense of the world and harness its resources for human survival. The elders’ stories often contain a history of the first contact between an indigenous people and colonial Europeans, an encounter that has driven most of the world’s languages to the very brink of existence.”

“Efforts to listen to and record small languages and their story traditions deserve our urgent attention. This must be accomplished while the elderly storytellers are still talking. If tales fall into disuse without being documented, we won’t even know what we are losing.”

Some national languages, like Welsh, Irish and Maori, have been successful in their revitalization. Hebrew is the most successful revitalization case. Yet languages cannot be revived by linguists sticking microphones into people’s faces or by foreigners like me trekking off to Laax, Switzerland, in the heart of Romansch country, to learn the language. There must be a drive to learn the language from within. I have read this time and time again in my research into endangered European languages. If there is no intergenerational transmission, the language will die. Children must be taught the language as a first or second tongue and continue to use it, not abandon it by the time they enter school where the more dominant language is spoken. However it is not easy to pass on the language if children have already been schooled in another. Harrison writes:

“I have been dismayed to find indifference in the very communities where languages are most threatened, but also heartened to see individuals undertaking heroic efforts to sustain heritage languages. An elderly Aboriginal lady, Thelma Sadler, teaches youngsters in western Australia the names for local plants in her Yawuru language. Young men in a mountain village in India perform hip-hop in Aka, a language spoken by barely a thousand people. These language warriors reject the false choice of globalization that says people have to give up small languages and speak only big ones. Their resistance gives hope for language revitalization efforts worldwide.”

Yet stating one’s desire to learn one’s own heritage language is not enough. You cannot learn a language by osmosis. Johnny Hill, Jr., one of the last speakers of the American First Nations language Chemehuevi, states tearfully:

“‘Sometimes I cry,’ he says. ‘It’s not just the language that’s dying, it’s the Chemehuevi people themselves.’ Johnny has made efforts to pass the language on to his own children and others in the tribe. ‘Trouble is,’ he explains, ‘they say they want to learn it, but when it comes time to do the work, nobody comes around.'”

Harrison, in his analysis of various language-revitalization and -revival methods, makes the same conclusion that I have encountered and what I personally believe:

“I make no judgments about what works; all I am sure of is that a language cannot be ‘saved’ by outsiders. Scientists and other outsiders can assist or enable, but the decision to keep a language alive, and most of the hard work required to implement that decision, must be undertaken by the communities that own and cherish the languages.”

The end of the book lists all the tactics he has encountered and reports on them without prejudice. It is difficult to judge them when some methods work in some language areas and identical methods fail in others. He ends his book with the following prediction:

“The push-back against globalization in the form of language revitalization will be one of the most interesting social trends to observe over the coming decades. Its outcome will have profound consequences for the intellectual capacity of our species, and for the state of human knowledge.”