The Legend of Pope Joan: In Search of the Truth 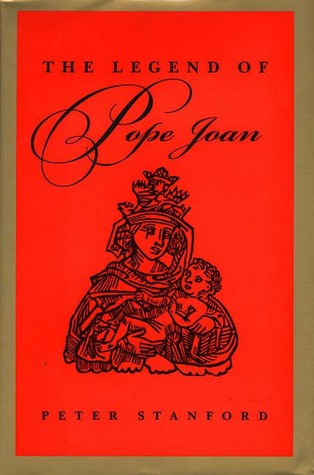 Pope Joan is alleged to have reigned for two years during the ninth century. She kept her identity hidden until the truth of her sex was revealed when she gave birth in the middle of the street. Her story is told by Peter Stanford in The Legend of Pope Joan: In Search of the Truth. I had long been interested in this cross-dressing pope and was hoping for a story that would leave me spellbound. One does not need tabloid journalism to tell a story as sensational as this. Unfortunately I found Stanford’s story quite boring, and this slim book of only 200 pages took me twelve days to finish. Stanford travelled to Rome to conduct his research and accessed mediaeval documents in libraries and museums. He discovered quite soon how difficult it was to research a pope from over a millennium ago. Often the only surviving sources were from a time four hundred years after Joan’s alleged reign, leaving much room for the original writers’ reinterpretations or worse–time to excise Joan from the public record. Stanford did not rely solely on the most well-known texts, and strove to find their sources–some of which were not lost after all.

The main theory for the promotion of Pope Joan’s existence was that she was created by the Protestant church in order to cast the Catholic church in a disparaging light. A certain way to turn followers away from Catholicism would be to promote the idea that they elected an unchaste woman as pope and were all too blind to notice. The story becomes sensational when she is said to have given birth–on the street no less. It smacks of a mediaeval urban myth, according to Stanford. However Joan does have her defenders:

“The fall-back of harder-hearted, less fanciful defenders of Joan has been to dwell on the fact that this was the Dark Ages, a period of political turmoil, illness, famine and marauding armies across Europe, when for many life hung by a thread. There was little time for scholarship or keeping records for posterity. Moreover, the argument goes, if the lack of a contemporaneous written record is taken as sufficient in itself to damn any story or character, Jesus himself is in trouble.”

Stanford raises the issue of the scant information about many mysterious popes throughout history, such as Lando, about whom hardly anything is known. The names at least of male popes are recorded for all history, yet prominent women figures have been ignored. Could Pope Joan have been ignored merely because she was a woman, or could her biographies have been excised from all church records once the truth about her sex was revealed? Could the Catholic church have rewritten its own history?

The church did not always bar women from high office. There were women bishops prior to the Reformation. There was thus already a precedent, and in the ninth century a woman could have risen within the Catholic hierarchy. But to the position of pope? The pope back then had not yet assumed the powerful and influential worldly title of an international head of state. There were many pretenders to the throne–the antipopes–and popes were deposed by being either imprisoned or murdered. The papal seat was a highly volatile position and it does seem possible that Joan could have existed and risen to the throne.

Stanford covers the theory that Pope Joan was a fantastic manifestation of the sexless and celibate priesthood. Priests, years after having taken the vows of celibacy, might have fantasized about women being under the priestly robes. Joan could have been an all-encompassing priestly sexual fantasy.

The jury is still out about Pope Joan. I am led to believe that Stanford considers her to be a real figure who was in fact pope. Stanford concludes the book with the following questions:

“Did she, or didn’t she? Could a German woman of English parentage pull off one of the greatest deceptions of all time and rise, disguised as a man, to the pinnacle of the Catholic church in the ninth century? If so, did the Catholic church then achieve a remarkable triumph by putting this embarrassing skeleton back in the cupboard in the post-Reformation period? Or is Pope Joan an empty and malicious legend promoted by generation after generation of anti-Catholics and anti-clerics? Perhaps, though, the truth is less clear-cut. Could Pope Joan be a significant myth or an allegory for some other historical happening? Or a bit of both?”