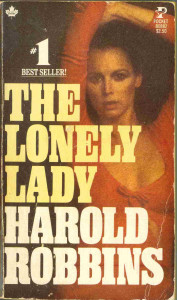 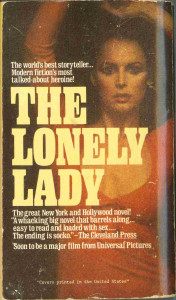 “The Lonely Lady” is one of my favourite worst films ever. Made in 1983, it was shown regularly on late-night TV throughout the eighties. I learned its dialogue and laughed myself silly. After I had read that key scenes in the movie were cut from the TV broadcast, I actually paid good money and bought a VHS copy at the main HMV store in downtown Toronto. The music in the movie was so awful that I even bought the soundtrack on LP. I can see now that these were wise decisions: this movie has never been released on DVD and even the VHS tape and vinyl soundtrack are collectors items. I once owned a paperback copy of this novel by Harold Robbins; it was a reprint to tie in with the movie release and featured the lonely lady herself, Pia Zadora, on the front cover. I gave the book away, unread, and when another copy came my way as a library donation reject, I was determined to read it sometime. After the month-long bore-and-chore of the recent Berlin Wall book, I wanted something fast and trashy to dive into, and, needing the shelf space for my latest Schoenhof’s book haul, I decided upon The Lonely Lady.

Originally written in 1976, my paperback edition was from 1977. Curiously, on the back cover it said “Soon to be a major film from Universal Pictures” yet the film itself didn’t come out for another six years. I fully understand that this blurb could have been fluffy Hollywood hype. The novel starts off in the fifties, while the movie begins in the late seventies. There are references to McCarthyism and Communism, new bathing suits called bikinis, and the purchase of a used 1949 Plymouth Belvedere. After being spoiled by the movie version I could not help but make comparisons, of which there were surprisingly few. The movie really does not mirror the novel at all, aside from the names of characters and a lesbian sex scene. There are however far more lesbian scenes in the novel than in the movie. The notorious rape scene at the beginning of the novel is entirely different from the movie version as well. I could read this book at a quick clip because its dialogue was so real–but that doesn’t mean it was any good. The heroine, JeriLee Randall, is an aspiring playwright who finds out quickly that no one in Hollywood or New York is interested in her work unless she puts out. Everyone takes advantage of her, and drugs and alcohol help JeriLee get through it all. The whole playwright-as-whore lifestyle is totally unbelievable, yet JeriLee puts up with it as if allowing another director’s hands to crawl up her dress were as everyday a showbiz activity as having a script rewrite over coffee. The strength of JeriLee’s convictions when she was a high school student to become a writer seems incongruous to her reality as everyman’s and everywoman’s whore. The book wouldn’t be deserving of its back-cover quotation “A whacking big novel that barrels along…easy to read and loaded with sex….” if JeriLee didn’t jump into bed with anyone who asked (or didn’t ask).

For such an ambitious and confident teenager, JeriLee apologizes a lot. Robbins always has her saying she’s sorry. This attitude might explain why she’s always hopping into bed with everyone, and not even seeming to regret it afterward. Even the trauma of having an abortion didn’t seem to faze her, and she blamed only herself for getting pregnant. The dialogue was one of the reasons the novel was so awful. Sure, the conversation flowed well, as Robbins used examples of realistic oral discourse, yet what the characters actually said to one another caused numerous eye rolls heavenward. I kept note of some of the most ludicrous passages. Does it matter who said what, and in what context? Not really:

“‘What are you looking for?’ he asked.
‘A cock,’ she said flatly. ‘The biggest hardest cock in town.'”

“For the first time in all the years I’d known him I saw the bitch come out. His lips drew back over his teeth in a contemptuous smile, and unconsciously his voice went a register higher. ‘For Christ’s sake, JeriLee! If he liked boys I’d suck his cock to get this play on Broadway. It’s got to be worth that to you. You’re a woman. Just this once try using your cunt instead of your head!'”

“‘I almost sold my second screen original until I met the producer. Somehow things got mixed up in his head and he thought the purchase price included me. When I told him a fuck wasn’t included in the sale of a story he said he liked and wanted, he dropped the whole thing. That never would have happened if a man had written it.'”

“‘I’ve heard of fucking one guy to get a job in this business. But did you ever hear of anyone who had to fuck everybody on the damn picture? Before it’s over they’ll have me matched up with everyone except the hairdresser and that will only be because he’s gay.'”

JeriLee gets caught up in a drug raid and gets sent to prison, an episode that had been omitted from the movie. She also has a lengthy lesbian affair which is not even touched upon, although the movie does include a ridiculous campy scene where an Italian cougar makes a play for her. The relationship JeriLee has with her stepfather, the sole person in her life who believes in her and loves her unconditionally, was left out of the movie as well. Although the novel was a breeze to read, I had to reread some passages because Robbins had the habit of jumping from one scene to another without even a paragraph break. Characters would be discussing going to the airport, for example, and then be there already unloading their luggage from the car, all within the same string of conversation.

The Lonely Lady was the trashy, speedy read I wanted. It was 421 pages where money was not necessary, since

“Sex was still the currency of payment.”