The Love You Make: An Insider’s Story of the Beatles The paperback edition I read 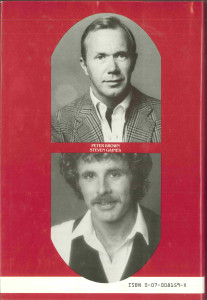 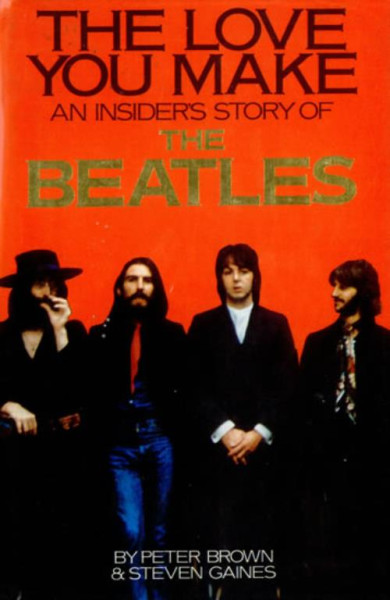 I bought The Love You Make: An Insider’s Story of the Beatles by Peter Brown and Steven Gaines in 1983 when I was seventeen and at the height of my Beatlemania craze. I bought anything associated with the Beatles, regardless of merit. If it had the Beatles’ name on it, I got it. With so much Beatles stuff on the market in the early eighties, I am amazed that I still managed to put myself through university without incurring any debts. The Love You Make caused a scandal when it came out, not just by its salacious contents but because of who wrote it. Peter Brown, name-dropped in “The Ballad of John and Yoko”, was a personal assistant to the Beatles and a member of their inner circle. If anyone had the inside scoop on the Beatles’ lives it was Peter Brown. He claimed to have had the authorization from all four of the Beatles to tell their story (having started to write the book in 1979, one year before Lennon’s murder), so it made for essential reading.

As readers of my blog or my on-line book reviews already know, I often acquire books and then may take years to read them–sometimes decades. In this particular case, it has taken me thirty-five years to finally read this book. Why didn’t I read such a scandalous book when it first came out? I was still in high school and had plenty of time for pleasure reading. I certainly read my share of Beatles books back then. I recall that I took some heat from my circle of Beatles friends for having bought this book. And I didn’t buy just one copy–I bought three: the original American hardcover edition; the original UK hardcover edition; and the Canadian paperback. All three are pictured in this review. I read the paperback. Did I decide not to read it because my friends would disapprove? Did I not want to know the dirt behind the Beatles’ image? I cannot answer now why I didn’t read the book back then.

There is no doubt in my mind that any insider’s story of the Beatles would turn the tables on their lovable moptop image. No one should believe that the Beatles were as innocent as their reputation portrayed in press releases. Brown must have witnessed drug and sexual escapades that no one–not even friends of the Beatles and least of all the press–would ever have known about. I don’t have a problem with the Beatles experimenting with drugs or sleeping around with a harem of women. I listen to their music, not police their sense of character. Yet Brown and Gaines did lay it on pretty thick, where the Beatles–especially John–are portrayed as stumbling around daily in the latter half of the sixties stoned on weed, LSD and heroin.

Brown tries too hard to be scandalous. The constant drug binges would have killed anyone else. The story reads as if Brown needed to create a scandal in order to make it seem interesting. Since I come from reading The Beatles’ authorized biography by Hunter Davies only a month ago, the stories are still fresh in my mind and indeed some of them appeared to be lifted word-for-word. Beatles manager Brian Epstein was given a most pathetic portrayal, where he carried an unrequited love for John until his untimely death in 1967. Brown insinuates that the two had a gay affair while vacationing in Spain, but even in 1983 this wasn’t news.

In spite of Brown being who he was and all the genuine access to the Beatles that he had, The Love You Make was still overrun with errors, many of which were chronological. Other errors misspelled names. It is normally my style to list every mistake an author makes but I just couldn’t be bothered this time. Why should I spend my time documenting the factual errors when what I am reading amounts to trash. I just let the mistakes pass. Two examples of how he or Gaines could have prevented errors would have been simply to listen to the albums they were writing about. The authors confused the contents of John and Yoko’s first collaborative effort, Unfinished Music No. 1. Two Virgins with their second, Unfinished Music No. 2: Life with the Lions. They also got the lyrics to John’s song “Mother” incorrect. Another mistake that made me roll my eyes was this statement:

“Although it had certain merits, Let It Be was purely a Phil Spector Wall of Sound Production, with his inimitable backdrop of vast choruses and lavish orchestrations. Paul was mortified by the kitschy female voices–the first female voices ever on a Beatles record–any by what Spector had done to one of his prettiest songs, ‘The Long and Winding Road,’ which Klein had earmarked as the album’s first single.”

I expect then that neither Brown nor Gaines even listened to the White Album, the popular name for the double album known simply as The Beatles, for there are a number of songs on it which feature women’s voices, including “The Continuing Story of Bungalow Bill”, “Birthday” and “Revolution 9”.

When Allen Klein entered the scene this was the only time that I felt the book became boring. (Trashy book as it is, I could not put it down.) I found all the talk about taxes, royalties and renegotiated contracts to be confusing as well. The authors sometimes flipflopped between UK pounds and American dollars in the same paragraph.

Brown revealed many stories for the first time, and told us so. Was the UK press such a close-knit circle of conspirators that no one wanted to scoop the others by revealing any of this dirt? I found the authors’ convenient and overused excuse that the press miraculously kept some events quiet to be beyond my scope of belief. Who has the press at their beck and call to write or withhold writing articles? Why would the press stifle a story about paternity lawsuits or junkie Beatles scoring acid? Were the Beatles so untouchable that the press–every single columnist who ever covered the group–decided at certain times to leave them alone?

In spite of when Brown claims to have started writing this book (in 1979), I firmly believe that after John Lennon’s assassination he and Gaines (the more experienced rock journalist coauthor) focussed on scandal to sell more books. The Beatles were everywhere in the early eighties, and what better way to direct attention your way among the dozens of tell-all books being published or reprinted at that time but to wholly tarnish the Beatles’ image. Now that I have read this book, I have to go back in time thirty-five years and ask myself, why did I buy three copies? Do I even want to keep these three on my bookshelves anymore now that I have read it?