The Malvinas, the South Georgias and the South Sandwich Islands, the conflict with Britain 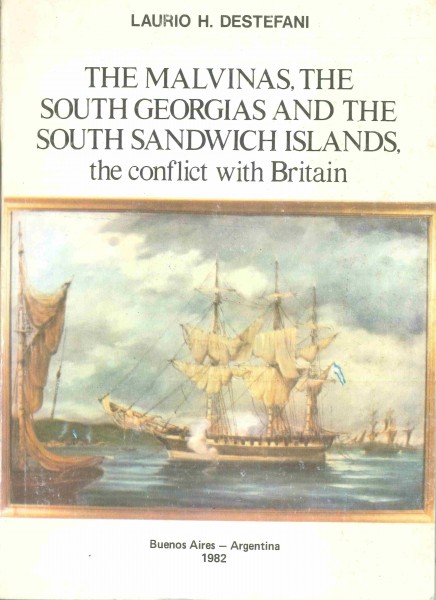 The Malvinas, the South Georgias and the South Sandwich Islands, the conflict with Britain by Laurio H. Destefani (translated by Martha Heath and Ruth James) was written in 1982 while the Falklands War was still raging in the south Atlantic. The war did not last very long (two and a half months) yet Destefani stated on several occasions that the outcome of the war was still to be determined. It is my belief that this book did in fact come out in 1982 and the author’s note dates it at May 12–when the war was still being fought–yet it likely didn’t appear and in translation until after the war had ended. Nevertheless I can also interpret the author’s remark as coming from the losing country trying to save face in defeat. The outcome may “still be determined” as in Argentina will get her hands on the Falklands–I mean the Malvinas–one day, even if she didn’t in 1982.

The outcome of the war did not turn out well for Argentina, nor did the start of this book, for on the very first line of chapter one we read:

“When, on the 2nd of August 1982, Argentina recovered the Malvinas and the South Georgia Islands…”

August had been struck out and April reprinted above it. Another false start occurred in chapter three, entitled “Brief geographical description of the Malvinas”. I found it confusing that the author alternated between imperial and metric measurements. It made it hard for me to grasp a hold of distance. He did not use both systems with one tagged along as the equivalent in parentheses, but started a sentence describing the islands in metric measurements and then later on in the same sentence used imperial, then went back to metric again. It was only after I had read the whole page that I realized the numbers didn’t add up. The south Atlantic in my head was warped since I was looking at numbers and not the units used after them. Then it hit me that the author had been jumping around with his measuring systems.

This book was not an account of the war itself. The war was still in progress in May of 1982 yet Destefani wrote about no military drama. Thus the “conflict” in the title referred to past diplomatic skirmishes and only in reference to the current situation. Destefani wrote a history of the Falklands, South Georgia and the South Sandwich Islands and Argentina’s right of sovereignty over them. Argentina inherited all of the islands upon independence from Spain. They maintained the settlements on the Falklands yet due to political turmoil on the mainland, abandoned the islands for decades. And then Great Britain moved in and never left. As a history of south Atlantic exploration, this was a can’t-put-down read, and an excellent translation at that. I enjoyed reading about all the Spanish governors and the attempts at early settlements. Argentina often puffed out her chest and issued statements such as “These islands are ours and we will reoccupy them again.” yet when faced with British military might she was always outgunned.

A moment of levity was encountered when reading about Argentina’s first attempt to establish a radio connection on the South Sandwich Islands:

“When the trio landed on deck of the ‘San Martin’, they were told to strip off all their clothes and to throw them overboard. It so happened that nobody could stand the smell which impregnated their clothes after having spent one month among the excrement of the penguins.”

This book was filled with maps (all using the Argentine names for the territories) and facts and figures about the earliest settlements on the islands. Portraits of past governors and paintings of landscapes generously filled the book as well. It was too bad all the photos were in black-and-white.