The Man Who Gave the Beatles Away I am really digging deep into my unread book collection now. After leaving Yorkville Diaries unread since 1984 and Quant By Quant unread since 1982, I now go all the way back to September 12, 1980: the day I bought The Man Who Gave the Beatles Away by Allan Williams and William Marshall. It has taken me 36 years to read this book. I bought it when I was fourteen and it has been on my Beatles bookshelf ever since. By keeping a daily diary I can easily remember events from my life, but honestly I was such a huge Beatles fan in 1980 that I didn’t need a diary entry to prompt my memory of purchasing this book. My diary didn’t record that on an earlier visit to the mall I had seen two copies of this book yet didn’t have enough money to buy it. When I returned on September 12 there was only one copy left. Why though did it take me so long to read it? I have dozens of Beatles books, and back when I was a teenager I certainly read a lot of them. My diary recorded what books I read and when. I can only think that perhaps I never read The Man Who Gave the Beatles Away when I first got it because I had just started high school a few days before. This is only conjecture now but perhaps I was so busy with homework and a drive to succeed in high school that I put my extracurricular reading on the back burner. And then John Lennon was murdered. Beatles books came out by the truckload in early 1981, both new books and reprints. I read a lot of those too. One day last week while I was at the Y I was thinking about what book I would read next. I like it when I am near the end of a book and I have to decide which one from my own collection I will choose next. I still have many dozens of books I have not yet read. And after going back to 1984 and 1982, I wondered if I had anything older that was still unread. And The Man Who Gave the Beatles Away came to mind. 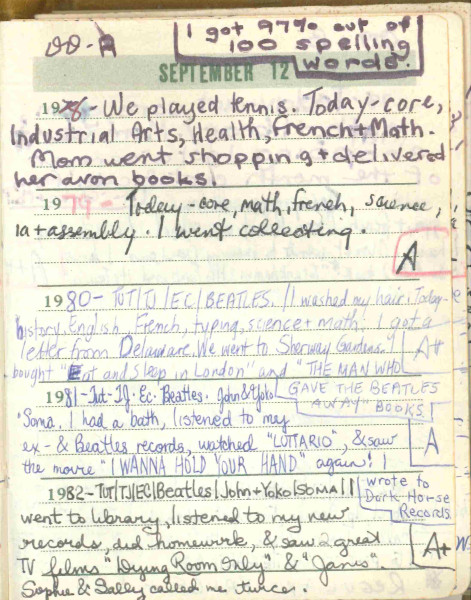 Beatles fans know who Allan Williams is. He was their first manager, however in the fifty-plus years since he severed his relationship with the Beatles he has embellished his role in how instrumental a figure he was in launching their career. This memoir was written in 1975, when John Lennon was still alive, so it was not tainted by the blood of a cash-in. It was tainted, however, by maudlin woe-is-me interjections and nice-guys-finish-last proclamations. The book definitely took on a tone of unreconciled whiny regret for not keeping the Beatles under his wing. I don’t believe that the Beatles would have stayed with him for much longer anyway; although it was Williams who severed his relationship with the Beatles, he–by his own words–seemed a wholly incompetent alcoholic “manager” who just wrote letters booking a few gigs and then didn’t have the spine to fight for his own commission. Brian Epstein, on the other hand, devoted himself totally to the band, and moulded them from the foul-mouthed leather-clad rebels into the clean-cut suit-wearing pop stars that made them world famous.

The Man Who Gave the Beatles Away was full of dialogue that seemed out of place if it genuinely came from the years 1959-1962. The quotations were all recreated, which is fine in order to create a mise-en-scène of Liverpool or Hamburg, yet the words used were straight out of 1975. Williams often recorded questions or statements addressed to the Beatles, and then supplied hypothetical answers from all four (or five) of them. When does this happen, when everyone everytime gives his own answer when a group is addressed? Williams also had the annoying habit of referring to John by “Lennon”, while referring to Paul, George, Pete, Stu and Ringo by their first names.

For a book written in 1975 by a confessed hard drinker, this book was shamefully rife with racist descriptions. In his dealings with managers and musicians of colour, Williams wrote:

“The boys were so black, and the Jac basement dance floor so dark, that you couldn’t see them until they smiled.”

“He [a certain black singer fronting a group of white musicians] brings a real jungle wilderness into the Mersey Beat.”

“The Joker was so black he was almost purple.”

There were many other offensive descriptions, and also those for homosexuals, which I won’t repeat here. Isn’t it ironic how those who profess to be friends with people of colour, as well as gay men (like Brian Epstein, among others) can then go around and disparage them all in the same sentence? How deep is Williams going to dig this hole?

Hindsight has tainted Williams’s perspective and he has painted himself as extraordinarily prescient in his capacity to see the Beatles’ future worldwide success. This however made no sense to me; if he could foresee the Beatles’ fame and the millions that came along with it, then why wouldn’t he stay with them? Why would he care so much for a measly ten pounds in unpaid commission when millions more was waiting to come only a year later? In reality I believe that he had no faith in the Beatles, he held no promise for them and once he was burned by them he had to get out. Once bitten, twice shy. Good thing too, as had the Beatles stayed with Williams, they might have all ended up injured (or dead) in a car accident. This book was written over forty years ago, and it is nonetheless shameful to read how often Williams drove while drunk. Are we supposed to be in awe of him? He brags about it! And it takes a pretty conceited degree of foresight to say that had Williams stayed on as the Beatles’ manager, then Brian Epstein would still be alive today:

To his credit, however, Williams does describe the early Mersey Beat scene. Beatles fans would be interested to read how rough Liverpool was in the late fifties and how treacherous the nightclub atmosphere was like. I don’t think Williams was exaggerating much in his descriptions of dangerous gang culture in the clubs. Plenty of black-and-white photos were included and most of them were published for the first time in this book.

It was obvious from the oral style that Williams dictated this memoir and Marshall may have transcribed it, or otherwise fixed it up. Nothing wrong with that, however the transcriber misspelled Allan’s name as Allen several times. A very glaring and embarrassing error, especially since Allan’s name is mentioned throughout.