The Morning After: The 1995 Quebec Referendum and the Day that Almost Was 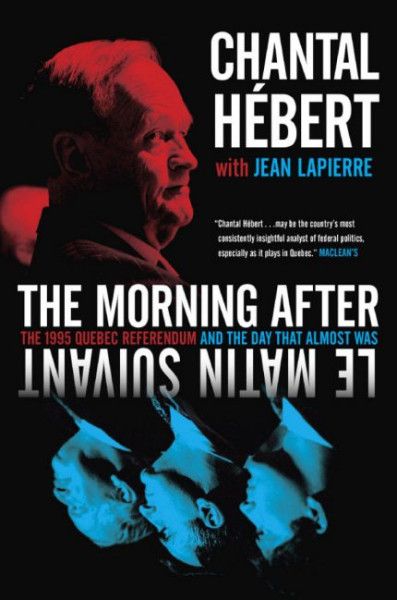 The Morning After: The 1995 Quebec Referendum and the Day that Almost Was by Chantal Hébert with Jean Lapierre was published in 2014, and revisits the Quebec sovereignty referendum from 1995. Instead of being a mere retelling of history as we know it, the authors looked to the days following October 30, 1995 and, based upon interviews with the key players from nineteen years ago, imagined what would have happened had the vote been a majority for Yes. The authors interviewed former Quebec premier Jacques Parizeau, Bloc Québécois leader Lucien Bouchard, former Prime Minister Jean Chrétien plus other MP’s and federal and provincial party leaders. Almost twenty years later, a certain mellowing has been cast over the recollections from that historic day, while for some, their memories still bristle with spite and resentment.

One of Chrétien’s strategies, which now seems more like a superstition or jinx fear, was for the federalists (the No side of the vote) to keep mum on saying anything about what they might do in the event of a Yes vote for Quebec secession. The federal government feared that a hypothetical acknowledgement of a Yes vote would give the separatists a legitimate mandate for sovereignty. Denying that a Yes vote could even happen immediately invalidates the main mandate of the separatist parties. Chrétien gave the choice for sovereignty the cold shoulder. Quebec independence thus became a nonperson of post-1964 Khrushchev proportions. Yet come the final week before the referendum, the federalists were on the losing end of opinion polls. How can you deal with the possibility that your country will be carved up if you insist on keeping your head in the sand?

The book was divided into sections, revealing the reminiscences of the Yes camp; the Quebec No camp; the federal government; and the premiers. Hébert and Lapierre filled The Morning After with insightful quotes, as well as heretofore private backroom negotiations. Roy Romanow, then premier of Saskatchewan, even had a secret task force to look into his province’s role within Canada should Quebec opt out of confederation. The format of the chapters made for exciting reading, as I anticipated each key speaker within the specific chapters. Lucien Bouchard, much to my surprise, seems to be not as staunchly pro-Quebec independence as I had thought. He was prepared to take a Yes vote and use it as leverage to push for more concessions for Quebec–perhaps without ultimately leaving Canada:

“[Bouchard] fully expected the Canadian authorities to demand a repeat vote.
“‘I could not imagine that they would say, yes, you are sovereign. We accept your sovereignty. They would have asked for another referendum. I know that Mr. Parizeau would not have wanted that. He would have preferred to declare independence unilaterally. But I thought we might need to do a second one and that if we worked hard at the negotiating table, we could get ourselves an even stronger mandate.’
“Given those differences, reciprocal suspicion dominated the two men’s relationship. In the event of a victory, there would be precious little trust between the chief negotiator and the premier, and the latter was determined to call the shots.”

Jacques Parizeau, on the other hand, had the sovereignty blinders on and would stop at nothing to pull Quebec out of Canada and be its first president. While both men were fighting for the same side, they were distant and did not communicate with one another, not even on referendum day. There was a brewing resentment that Parizeau felt against Bouchard: the Quebec premier needed the star Bloc leader on his side to campaign for sovereignty, but Parizeau was prepared to dump him from any future independent Quebec cabinet. Parizeau wanted to be the star–the only centre of attention–of a newly independent Quebec, and was ready to dump Bouchard once a Yes vote was confirmed. This love-him-and-leave-him attitude was not lost on Bouchard:

“The star of the Yes camp sensed that he was fast exhausting his usefulness to the man under whose orders he was expected to lead Quebecers to independence. With the campaign barely over, Bouchard’s role was about to be downgraded from indispensable to disposable. He was determined not to let that happen.
“Almost twenty years after the fact, the Parizeau and Bouchard teams still cannot agree how things played out between them over the course of that fateful day. To listen to the former Bloc Québécois leader, he was systematically given the cold shoulder. His calls to Parizeau went unreturned and his queries ignored. ‘I could not talk with Mr. Parizeau or with people close to him. I simply could not get through to them.'”

“In fact, in the days leading up to the referendum, Bouchard had started to prepare for an inevitable showdown with Parizeau. As Quebecers went to the polls to cast their ballot, the two leading figures of the Yes camp were already headed for what stood to become a fight to a knockout finish. Their shadowboxing on referendum day was just the warm-up act.”

Mario Dumont, leader of the Action Démocratique du Québec who campaigned on the Yes side, also felt Bouchard’s exasperation:

“All day I would call Lucien to find out what the plan for the evening was, and all I would hear at the other end of the line was a string of swear words as he vented his frustration over his inability to reach the premier.”

Had the referendum vote been a majority for Yes, the winning side would not have known what to do next. With both parts of the Yes camp not speaking to one another, it would have been chaos on stage and a fight for the microphone. The fight would have spread to the negotiating table, of course. Brian Tobin, then a federal MP, remarked:

Thus Jean Chrétien faced an uphill battle to hold on to power if his government failed in the No campaign. Chrétien–as with all Quebec federalists–would immediately lose their legitimacy in government. I can see his point: why would federalists ever allow Quebeckers–those on the winning side of the referendum–to sit on both sides of the negotiating table?

“I would have told the Liberals: you were entrusted, for better and for worse, with the future of the federation. You have failed and you are the last people that can negotiate with this bunch that has just won the referendum. Western Canada will not recognize your legitimacy.”

And I see his point. Manning himself could have claimed to be the rightful heir as voice of the Canadian people had the Liberals lost the confidence of the Canadian public and the official opposition–the Bloc Québécois–was now off to graze in sovereign pastures.

When I picked up The Morning After I never would have thought that “yesterday’s news” could have been made so riveting. This was an exciting read, and an intelligent insight into the private machinations that went on before the referendum and what might have happened after.

(An aside: during my trip to Iceland in the summer of 2015, I could have sworn I passed Chantal Hébert on Austurstræti in Reykjavík. After I returned home I wrote to her, in French, to ask if she had been in the Icelandic capital on the same days I was. Turned out she was! I probably could have yelled out “Chantal!” on the main street of Reykjavík and if it was her, she would have stopped and chatted for a little bit. And if it wasn’t her, no one would have responded, so no big deal.)