The Muslimah Who Fell to Earth: Personal Stories by Canadian Muslim Women 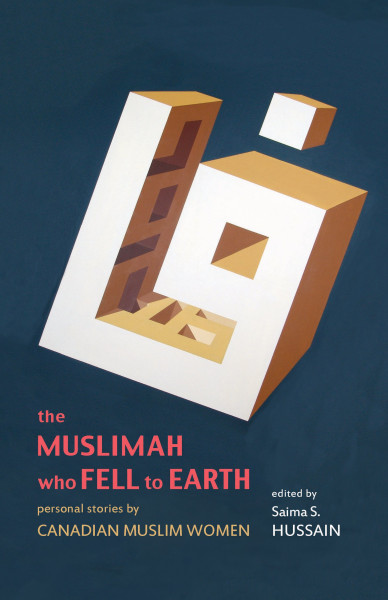 Twenty-one women contributed to The Muslimah Who Fell to Earth: Personal Stories by Canadian Muslim Women, edited by Saima S. Hussain. Hussain selected a diverse assortment of stories to reflect the myriad lives of Canadian Muslim women, thus no two stories were the same. Some women were born in Canada, while some were from immigrant families. Some women wore hijab or niqab, while others didn’t. Some were not heterosexual while others cussed like sailors. Most women were able-bodied but one was blind and used a wheelchair. The point in selecting these contributions was to show the reader that there was more than one kind of Muslim woman out there, and she could be as diverse within her faith as in any other religious group. I was touched by the stories by women who were struggling in their marriages or going through divorces.

Many of the immigrant women wrote to praise Canada for its openness to diversity and acceptance of Islam and the choice of some Muslim women to wear hijab. These testimonials touched me most of all. Azmina Kassam wrote:

“I was learning more about being Canadian, which has meant for me openness, tolerance, curiosity, and respect. It has been about engaging the other in meaningful dialogue so as to learn and expand one’s understanding.”

Mona Hashim, who wears hijab, wrote: “I have to admit that throughout my ten years in Toronto, I always felt welcome wherever I went. People helped me to get my shopping cart to the bus, guided me through the downtown streets. Once, on a dark and cold Christmas eve, a nice bus driver pointed out to us the mosque in Scarborough. Of course there were a few incidents where I was called names and had the middle finger raised at me. But generally speaking, I didn’t feel like a stranger.”

The hijab is a major theme in some of the stories, as the writers shared their reasons for abandoning it when they came to Canada, or for deciding to wear it later. Each woman had her own reasons for wearing hijab or niqab, and all of them do so freely as their own personal choice. Mariam Hamaoui sums up the whole “issue” of wearing hijab in a paragraph that the French government should read and apply:

“I support those who wear the hijab and I support those who don’t wear the hijab. Hijab is a choice. Often difficult, but the choice has to be made by the woman. If a woman chooses to wear it, it is not for the sake of anyone else but for herself and God. Neither her mother nor her father can order her to wear it. Neither her brother nor her husband can order her to wear it. It is a choice and as such should be respected. By the same token, women who decide that the hijab is not for them should be respected equally and should not be ridiculed or disrespected.”

Yet Tammara Soma summed it up the most succinctly:

“It takes a strong heart and a thick skin to wear a hijab.”

If I ever hear Islamophobic prejudice against the hijab or niqab, I draw attention to women of another religious group, a group protected in our own constitution: Catholic nuns. Nuns are covered in a garb very close in resemblance to that worn by some Muslim women. Why does a nun’s head and body covering threaten no one, yet a Muslimah’s gives rise to such prejudice?

The women write about their struggles with mental illness, integrating and finding work, yet the comic relief is provided by the stories about overbearing relatives who try to fix them up with potential husbands. I especially liked the poems and vignettes by Meharoona Ghani in “Letters to Rumi”. In it, she feels conflicted while ogling a muscular construction worker:

“We passed a construction worker whose tight white t-shirt outlined his muscular upper arms and chest, revealing a hint of a tattoo below his collarbone. ‘I’ve always wanted a tattoo…wait…I don’t think I should be staring at him while I’m wearing a hijab and observing Ramadan!'”

Almost all of the stories followed a similar style of narrative, as a first-person chronological account of each writer’s history as a Muslim woman in Canada. Two of the stories were endnoted and one in particular was like a formal dissertation: Maryam Khan’s “Queering Islam Through Ijtihad”, who tripped over herself from the very first paragraph in trying not to offend. Two stories integrated the authors’ own poetry, which was a welcome treat within the reading experience.

Hussain left the writers’ stories in their original states, without any kind of editorial explanations or parenthetical insertions to elaborate on some Muslim (or specifically Arabic) terminology. For the most part, meanings could be derived from context, yet there were some instances where an explanation would have been helpful. Perhaps Hussain left the texts in their original states to show the authenticity of the writers, however I feel that the following grammatical gaffes should have been corrected. In all of the quotations below, the I in italics should be me:

“As we settled into our new life in Cairo, my parents had to make some difficult choices regarding schooling for my siblings and I.” (pp. 34-35)

“…and as our family grew bigger, the distance between my biological father and I grew wider.” (p. 73)

“It eventually become [sic] a home to my brother and I when many years later my mom remarried…” (p. 99)

The Muslimah Who Fell to Earth took its name from one of the stories within, and its author, Munirah MacLean, explained the origin of the title. It certainly is a brilliant title for this collection. As a non-Muslim man, the twenty-one stories left me feeling proud of Canada and of being Canadian, yet most of all proud of living in a country that welcomes diversity and thrives on it, while our neighbour to the south recoils in horror at the thought of a threat to its national security from Syrian refugees. The US should hang its head in shame. Please take the opportunity to see Hussain and some of the contributing authors as they promote this book in public readings throughout the Greater Toronto Area.