The northern Faroe islands are not heavily populated. The official population counts for the islands we drove to are: Viðoy (601) and Kunoy (143). Today, more of the islands are connected by tunnels or bridges (more so than when I was last here in 2003) that public transportation by ferry to these islands has been cut drastically. Bus service is not that great either as island residents have cars and the few tourists who visit these places rent one. Thus when Mark and I planned our travel to the northern islands by public transit we realized it would make a lopsided day trip: we would end up spending six hours on one tiny island only to find we’d have twenty minutes on another.

It made sense for us to rent a car when we were in KIaksvík. However educated travellers we claim to be, it took us by surprise that there wasn’t a single car rental agency in the entire town. Klaksvík is the Faroes’ second-largest community, and located in the northern part of the archipelago at that; why couldn’t you rent a car up there?

Fact is, people rent cars when they land at the islands’ only airport in Vágar. There isn’t even a car rental agent in the capital of Tórshavn. So Mark and I were out of luck, until the Klaksvík travel information officer informed us that a local man who works at a nearby garage has sometimes rented out his car to visitors. She’d check with him to see if it was available. Luckily it was. Without even needing to see Mark’s drivers licence or asking us any questions, he lent it to us for the equivalent sum of $75 Canadian. I have no knowledge of cars but I could tell from looking at it that it was new, classy and big. It was a black Ford Focus station wagon with only 3500 km on it. It was a standard which Mark liked since his own car was like that. We headed off for Viðoy, the island to the northeast.

The travel officer gave us some driving tips in the northern tunnels. The tunnels have no lights and only one lane. Cars driving north have the right of way. Front lights are easily seen so drivers have enough time to pull into any of the laybys to allow the opposing car to pass. We found out that sometimes we would enter a tunnel and be able to see the exit far, far away, only to have it darken temporarily by an approaching vehicle. We were travelling north, at first, so we knew that the approaching cars had to pull off to the side to allow us to pass. Most cars, upon seeing our lights, pulled off to the side immediately. We thought that these cars could have been tourists, because other cars, that we had encountered later, waited a good long while before they pulled into the laybys. Maybe these cars had Faroese drivers and realized they could drive south hundreds of more metres before they had to pull over. I recall one such vehicle pulling into a layby at the last possible chance.

En route to the village of Viðareiði (population 354), the northernmost village of the Faroes on the northernmost island, we passed tiny Fugloy (population 37). Mark drove down a paved lane to the right of the main road but we realized that that wasn’t the way to Viðareiði. He tried to back up but couldn’t. Try as he might, Mark couldn’t manage the stick shift to reverse. We definitely had a problem: on the right side of the lane was a ditch, so we couldn’t make a circle and drive on out of there. After some nervous assessments (I genuinely feared that our driving trip had now ended before it began) Mark inched to the right and we were indeed able to drive out in a circle, but not before taking a dip over the edge where I felt the car would end up stuck for good. Mark and I made sure that everywhere we travelled on Viðoy had an out for us. We checked out the roads in advance, and also on foot, to be sure there was a place to turn around. Mark realized he needed to go back to Klaksvík to find out how to operate the reverse on the stick shift. I tried to read the drivers manual but as it was in Danish I was not going to try to interpret it, Germanic language though it may be.

We had lunch by the church and looked across the Hvannasund to the island of Borðoy to see the abandoned village of Múli. I could see it quite well with Mark’s binoculars. I walked through the cemetery and looked at the houses. There was a small hotel in Viðareiði, but nothing else appeared to be open on Monday.

On our arrival back in Klaksvík while Mark looked into sorting out the stick shift, I checked out the local public library. It was not yet open after we rented the car but was now. It had a huge section on the Faroe Islands, naturally, and the Faroese language. I took notes and photos of books I was interested in. Mark met me there when he sorted out the stick shift and we were on our way to Kunoy, a finger-shaped island connected to Borðoy by a single-lane causeway. On Kunoy the tunnel runs east-west so we wondered who would have the right of way. I figured that those travelling west would, since all western drivers must turn right and head north.

Kunoy has a total population of 143 yet two villages. The more scenic, also named Kunoy (population 71), was on the western side of the island, halfway up, opposite the slenderer finger island of Kalsoy. On the Faroes sheep can always be heard bleating no matter where you hike. They are loud and may not be as close as you think they are. On Kunoy we stopped the car at the bus stop (after making sure the next bus’s arrival would not be anytime soon) and walked till the paved road ended, then past that when the dirt road ended, and then stopped when a fence kept us out because it was a sheep pen. We saw the church and community centre. What I appreciate about the northern Faroes is that each island kept clean public toilets open for the scant number of visitors.

We drove back to Klaksvík to return the car to the owner on time. While Mark waited in the library parking lot I got fish and chips from a nearby trailer, popular with the locals. By the time I came back the owner and his wife were there. We chitchat about our time in the Faroes then caught the bus back to Leirvík. We ate some of the fish and chips as we waited for the bus.

I wrote only twelve postcards from this vacation. I sent one from Iceland and the other eleven I mailed in Tórshavn or at the Vágar Airport. 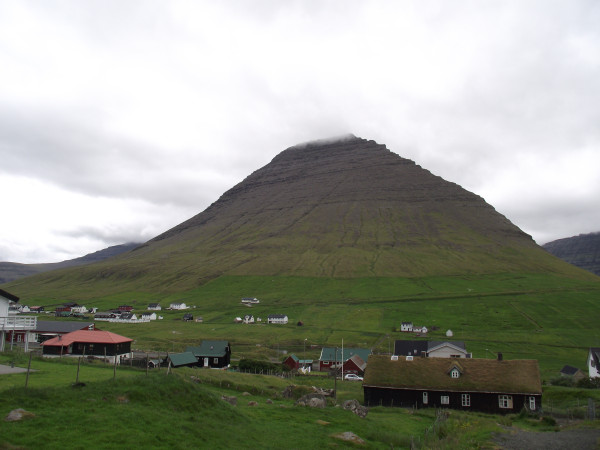 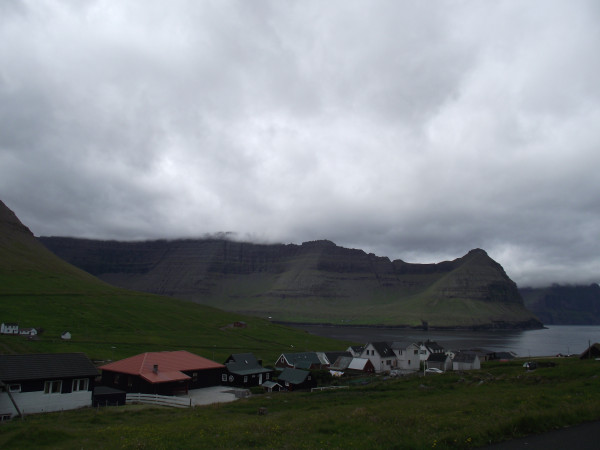 Mark walking towards the church in Viðareiði. The abandoned village of Múli, across the strait on the island of Borðoy, are the white specks in the centre left. 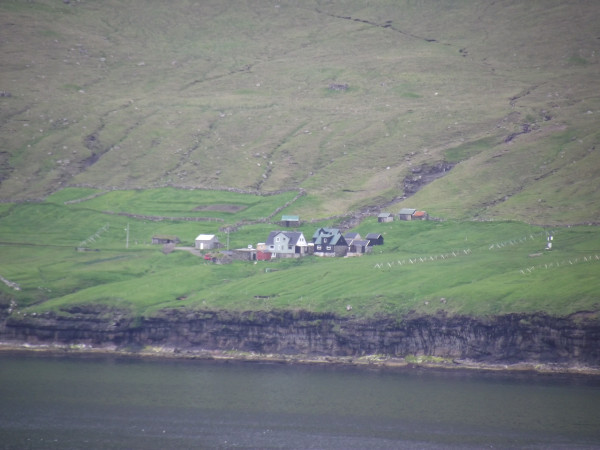 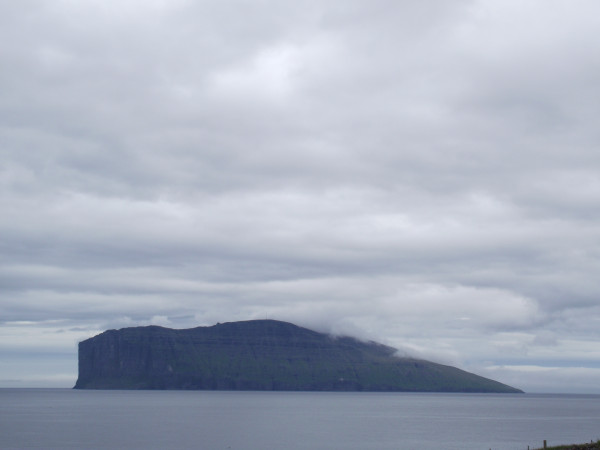 Enormous dictionaries at the Klaksvík Library Mark on Kunoy, with the island of Kalsoy across Kalsoyarfjørður One wrong step would lead to certain death on Kunoy 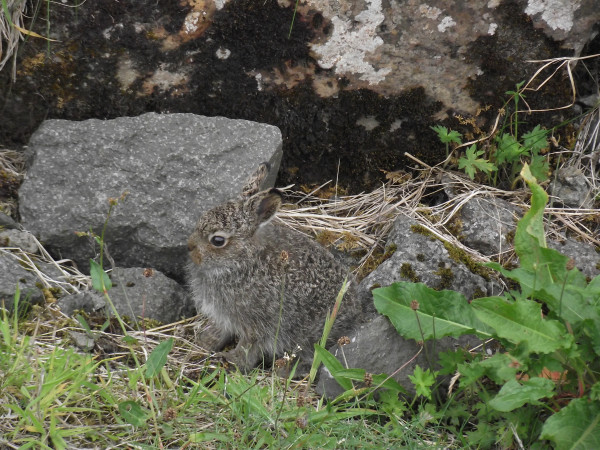 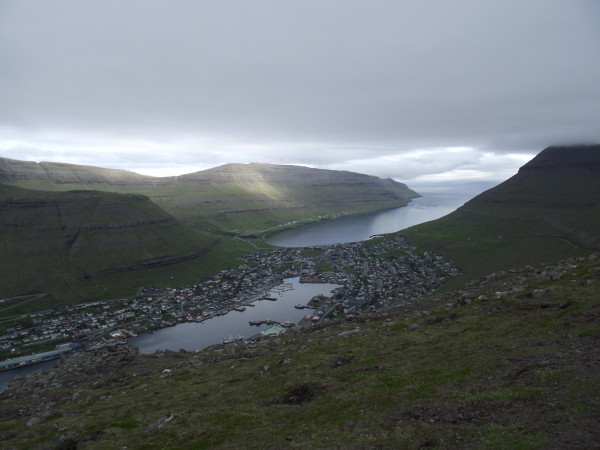 Klaksvík from the top of Klakkur (413 m) The ferry from Syðradalur, on the island of Kalsoy, returning to Klaksvík