The Politics of Blindness: From Charity to Parity

I am an advocate for blind rights and accessibilty. That I can read a printed book is a gift I treasure every day. As one with a visual disability myself, I know better than to take my eyesight for granted. I am sensitive to the needs of those with low visual ability or no visual capacity at all, so I was drawn to The Politics of Blindness: From Charity to Parity by Graeme McCreath, because it was written by a blind author about the state of blind charities in Canada. McCreath pulls no punches in his biting critique of the ineffectiveness of the Canadian National Institute for the Blind, a 100-year-old organization which in his opinion has done very little towards helping those who need its services the most. 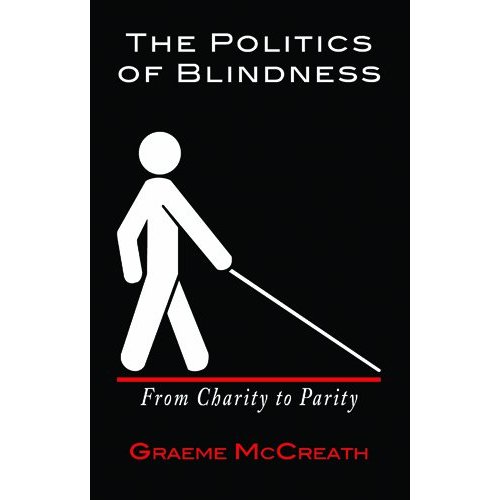 It was a shocking surprise to read in the preface:

“Our government initially chose to try to equalize this playing field by creating the Canadian National Institute for the Blind (CNIB) in 1918. But this charitable organization, which requires an enormous amount of resources to maintain, represents a considerable impediment on the long road to blind people’s achievement of independence and equal opportunity.”

“If we look at the lives of blind Canadians, not much has improved since the inception of the Institute all those years ago in 1918. Benevolent Canadians have been donating their hard-earned dollars in the name of the blind for all these years, but there is still massive unemployment, fragmented and inadequate rehabilitation and limited education or prospects for training.”

This criticism is maintained throughout the book, with stories about overpaid CNIB senior executives who, unlike their clients, have sight. I agree with McCreath that organizations that represent a specific group of people should have those people at its highest levels of management. Imagine any other organization be it charitable, for-profit or activist (for example feminist, aboriginal, prostitutes, engineers) with an executive body devoid of those in whose name it represents.

McCreath paints a dark portrait of the CNIB as a charitable institution accountable to no one, that behooves blind Canadians to be members in order to access the bare minimum of support services. Services that one might expect the CNIB to provide such as employment training, the sale of discounted accessible equipment such as scanners and Braille typewriters, and even guide dog referrals are all either not covered by the CNIB or are otherwise disappointingly lacking. Much to my surprise, the CNIB does not train guide dogs nor does it even provide referrals, although there is plenty of evidence that the organization likes to piggyback on the efforts of those who provide this service.

I did not feel that The Politics of Blindness was a whiny rant against the CNIB, even though McCreath had virtually nothing good to say about the organization. Whatever trace of a compliment he may have had was for a satisfactory yet still barely passable level of service. McCreath opened my eyes to what the CNIB actually does and does not do, and how its main concern in the past fifty years is making money at the expense of its clients, most of whom–75% of all blind adults–are unemployed. With such an embarrassingly high unemployment rate, surely much more has to be done to integrate blind people into the workplace and to adapt these workplaces by making them accessible to the blind. I found it most appalling how the CNIB operates as a for-profit monopoly. They are the sole suppliers of essential accessible devices yet provide them to their clients at exorbitant prices. Why is a charitable organization that is funded by donations charging its clients, who are in many cases living below the poverty line, for accessible equipment at all? Why then are people donating to the CNIB if the organization is not being charitable?

McCreath made his book available in a variety of accessible formats, such as Braille, audio, DAISY and E-book. Publishers are sorely unaware of how difficult it is to read the works they produce, as in my own experience I have strained to read type on dark backgrounds. The Politics of Blindness however was the easiest effort to read of all, as the pages were white (not any shade of cream or off-white) and the type was large with clear marks of punctuation. There was only one glaring spelling error, the unfortunately multiply-misspelled “opthalmologist”.

The Politics of Blindness will change your mind about the role the Canadian National Institute for the Blind has in helping those who need it the most.