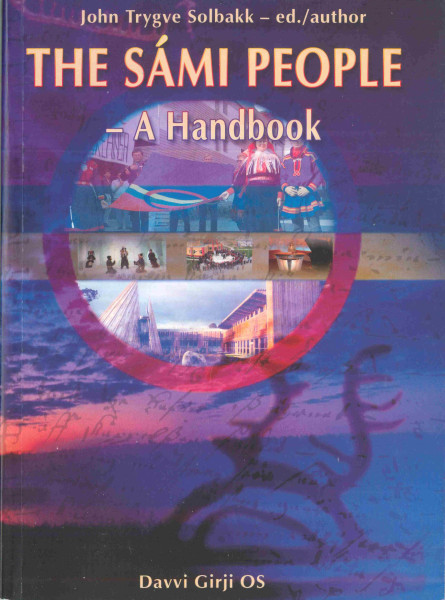 I bought The Sámi People–A Handbook, written and edited by John Trygve Solbakk, when I visited Siida, the Finnish Sami museum in Inari in 2007. To mark this year of the Finnish centennial, I am reading all of my books about Finland and Finnish language and culture that are still unread. I had long wanted to visit Siida and you can read about it in this ten-year-old blog post.

The Sami occupy the far north of Norway, Sweden, Finland and the area around the Kola peninsula in Russia. Since the Sami territory occupies four separate nations, Solbakk covered the same topics in each country chapter. Autonomy, language and property rights were among the topics covered in each country. Granted, this book was a “handbook” and perhaps Solbakk did not intend for it to be read cover to cover, but I did find the sections on each nation’s multiple Sami political parties and labour organizations to be quite tiring. He described them in depth and one political party sounded pretty much like every other, then multiplied by four countries. This book was originally written in Norwegian and credit for its English translation is to a translation service. As a Norwegian text, Solbakk focussed mainly on the Sami in Norway, with the Norway chapter five times as long as the individual chapters on Sweden, Finland and Russia. The result was Norwegian overkill when all I wanted was to move on to another country already.

A century ago the Nordic countries adopted an official policy of assimilation, whereby the Sami were encouraged to adopt the dominant culture and in some instances they had no choice, such as when they were denied schooling in their native language:

“Another common characteristic of very many indigenous peoples is that central authorities have tried to undermine their cultures and that they have been subjected to long-standing assimilation policies. This is also the case for the Sámi in Norway. During the 19th century, they were defined as an alien nation and often characterised as uncivilised, wild nomads. Social-Darwinist thinking also fuelled racist attitudes and racial hierarchy conceptions. Such concepts contributed in moulding the policies of the public authorities.”

The Sami in Sweden were regarded as lower class and intellectually undeveloped. Swedish authorities encouraged them to remain involved in reindeer husbandry and to keep out of other endeavours. The National Board of Agriculture even stated in 1941 that “the Sámi had racial qualities that made them unfit to be farmers.”. This attitude seems heinously racist and on the same level as apartheid South Africa:

“The entire period between the world wars is a dark chapter in Sámi literary history and perhaps in the entire history of the Sámi people. The authorities’ assimilation policies had done their work, and on top of that came the war.”

“After World War II, an increasingly reflective view of the Sámi as an ethnic and linguistic minority became more prevalent.”

Solbakk surmised that each nation’s struggle through WWII (even neutral Sweden) brought entire countries together in solidarity. Populations were united in their diversity against the enemy. All of a sudden, the socially-conscious Nordic countries changed their attitude towards their own Sami minorities. Each country (with the exception of Russia) adopted policies to protect the Sami with language and political rights, as well as with economic and environmental protection. Russia, on the other hand, imposed the harshest assimilationist policies whereby their reindeer were taken away and the Sami were forced to move from their villages into collective or state farms. Sami villages were closed down in a decades-long purge. At the end of the Russian Revolution, fewer than ten thousand people lived on the Kola peninsula. By the 1990’s, the population surged to 1.2 million. The Sami thus became “a microscopic minority in their own land”. Limited language rights were not restored until after the fall of communism.

The Sámi People was loaded with photographs and maps, however I found the text on the maps to be too small. This book spent far too much space on the Sami political movements in each country, when paragraphs would have sufficed instead of multiple pages.