The Second Sexism: Discrimination Against Men and Boys 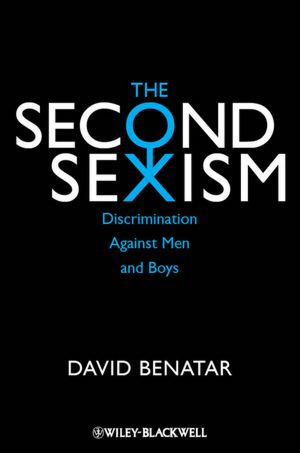 The topic of sexism or sexual discrimination against men and boys is a hugely controversial topic, one that raises both ire and ridicule towards those that make this claim. It is not easy to discuss this form of misandry without having one’s arguments beaten down as soon as one opens one’s mouth. In The Second Sexism: Discrimination Against Men and Boys, author David Benatar repeatedly and almost apologetically falls over himself in trying not to cause offence by merely bringing up certain aspects of discrimination:

“This book is about the second sexism. Accordingly it is not about that sexism of which females are primary victims. This is not because I deny the existence of such sexism. It clearly exists and has existed for a very long time.”

“Given the prevailing orthodoxy in the academy and the sensitivity of the issues I shall be discussing, the views I defend in this book will be deemed threatening by many. I am thus under no illusions. My position, no matter how clearly stated, is likely to be misunderstood. Where it is not merely dismissed (sometimes vituperatively, as inconsistent with received opinion), it is likely to be subject to numerous (sometimes overly confident) mistaken objections. Indeed, overly confident objections are very common among those defending orthodoxies. One reason for this is that the responses to those objections by those defending heterodox views is so much harder for the orthodox to imagine, given either the rarity of unconventional views or the rarity of their being openly expressed. Orthodoxies are repeated endlessly and usually go unchallenged. The result is that they acquire a life of their own and become self-reinforcing. Thus those who hold orthodox positions have no felt need to justify their positions, which become entrenched by being shared by so many others around them.”

The introduction alone to The Second Sexism is twenty pages long, with five pages of endnotes. Benatar is desperate to make sure his points are taken seriously, and is quick to list the top ways in which discrimination against men and boys manifests itself:

“While the manifestation of sexism against women is widely acknowledged, few people take seriously the idea that males are also the victims of many and quite serious forms of sex discrimination.
“So unrecognized is this form of sexism that the mere mention of it will be laughable to some. Yet women are typically exempt from military conscription even when men are forced into battle and risk injury, emotional repercussions, and death. Males are more often victims of violent crime, as well as of legalized violence such as corporal punishment. Sexual assault of males is often taken less seriously. Fathers are less likely to win custody of their children following divorce.”

I consider myself a feminist, one whose views follow those of Camille Paglia and Christina Hoff Sommers, the make-no-apologies, we’re-not-victims branch that riles those like Gloria Steinem and Catharine MacKinnon. I do not wish to debate these branches of feminism here, but it is in the reader’s interest to know where I’m coming from. I love Camille Paglia and her ballsy fuck-you attitude. Feminists on the other side of the spectrum would castrate me for even daring to talk about feminism, claiming I was misappropriating their voice, and that I used “ballsy” in a feminist context would obviously be another form of the dominant sexist patriarchal infiltration of women’s space. The reader, however, might be surprised that I also share some suprafeminist views that might be even too radical for MacKinnon. I thus take issue with some of Benatar’s claims about discrimination against men in child custody decisions, because in my opinion the overwhelming majority of cases where men lose these decisions is justified.

Benatar belabours the case about the prohibition against women serving in combat. This serves as his central argument throughout The Second Sexism. Why are only men conscripted? And why are women never sent into combat? Benatar replies:

This theory perhaps explains why historically in North America corporal punishment was only on the books for male offenders. Benatar provided numerous examples in international case law where men and women, who committed the same crime together and were both found by the courts to be equally guilty, received different punishments. The male offender suffered corporal punishment while the woman did not. Custodial sentences in the United States are given to men far more often than to women when they commit the same crime. Why are women offenders treated more leniently? Benatar writes:

“While the balance of evidence suggests that females are treated more leniently in the criminal justice system, there is considerable disagreement about what explains this phenomenon. One popular hypothesis has been the so-called chivalry explanation, according to which the benevolent and protective societal attitudes towards women explain why they are treated more leniently.”

Barring their use in the Latin phrase de jure above, Benatar’s overuse of italics throughout his book in order to make a point made his academic thesis read like a radio script. Perhaps the function of the italics was to create a more flowing read, one that engages the author to the reader as if he was telling us a story. I found The Second Sexism, despite its brevity at 288 pages, to be a very slow read. I find the subject of antimale discrimination highly interesting, and I was looking forward to the book, but didn’t think it would take me seventeen days to finish.

Benatar acknowledges throughout the book that discrimination against girls and women exists. In no examples where he discusses male discrimination does he ever deny that females are also affected, whether it be inside prisons, in the courts or in the military. However he cannot deny that some feminists seem to appropriate the entire concept of discrimination. Whatever happens to women is discrimination; whatever happens to men is just too bad. That men might be suffering on the battlefield, sometimes giving their lives (involuntarily in cases of conscription) is lost on these feminists. Women’s suffering, it seems, always trumps men’s:

The topic of discrimination against men and boys brings out a minefield of opinions, scattered across the battlefield. A chill fills the rooms of academia whenever the topic is raised, as it is one of the most politically incorrect topics of our day. Benatar has written a brave and bold book that seeks to give justice not only to men but to all people.