The Tragedy of the European Union: Disintegration or Revival? 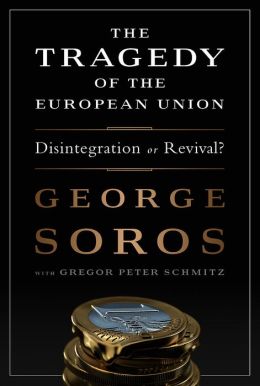 I decided to read The Tragedy of the European Union: Disintegration or Revival? by George Soros with Gregor Peter Schmitz after the UK voted to leave the EU. I was particularly keen on learning what Soros felt about Great Britain’s relationship within the European Union in 2014, when this book was published. This book was compiled in a transcribed interview format between Soros and Schmitz. The conversational style made the book easy to read and also to understand. The historical aspect was important since pre-EU history was the subject of the first interview. One does not need to be an economist to grasp the economic theory in the interviews. I did find the final section, an essay Soros wrote entitled “Fallibility, Reflexivity, and the Human Uncertainty Principle” to be over my head, however I did reread it to try to grasp his economic concepts. I didn’t want to get through it just for the sake of turning pages.

When Schmitz asked what Soros thought about Great Britain withdrawing from the EU, he answered:

“I think it would be a big blow to Britain, because right now, Britain has the best of all possible worlds. It is part of the common market, but it is not part of the euro. Any change would be for the worse as far as Britain is concerned.”

“For Britain, EU withdrawal would undermine London’s position as Europe’s financial center and threaten foreign investment directed at the European single market. The European Union, in turn, would be diminished by Britain’s departure. Britain would cease to play its historic role of maintaining a balance between hostile blocks on the continent. Its departure would powerfully reinforce a process of economic and political disintegration that is already under way.”

When asked why this would lead toward disintegration, Soros replied:

“Because Britain has always played a balancing role between hostile blocks on the continent. And Britain’s absence would greatly diminish the weight of the EU in the world. That would be a loss for the world. In my view, the world is suffering from a breakdown in global governance.”

Now that the UK is on the way out, it thrusts Germany more than ever before into the position of EU watchdog. Soros called German Chancellor Angela Merkel benign and cautious, but understood her strategy in not wanting to appear too much of a hegemon:

“Germany does not want to dominate Europe, but the willingness to make sacrifices has disappeared. At that time, Germany was always willing to give a little more, and take a little less. That is what made the process of integration so successful for a time.”

“The point I am making is that Germany must now choose: either become a benign leader, which means agreeing to a strong banking union and some form of eurobonds; or leave the euro and allow the debtor countries to mutualize their government bonds.”

We are in the middle of economic history being made, and will see if Germany takes over from being a “hostile block”. Soros also expressed a foreshadowing about the disintegration of the EU into two other blocks (blocs): northern versus southern Europe, with the former being the stronger and more stable, while the southern more accessible to the influx of refugees from eastern Europe and Syria.