The Trouble with Islam: A Wake-up Call for Honesty and Change 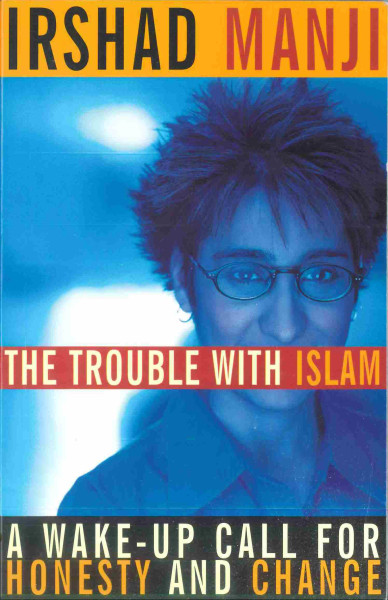 The Trouble with Islam: A Wake-up Call for Honesty and Change by Irshad Manji was written in 2003. Manji wrote her book in the form of a lengthy open letter, wherein she expressed her ideas how this “trouble” manifests itself through Islamic hypocracies, ignorances and sanctioned prejudices against Jews, Christians, women and homosexuals. I was looking forward to this self-styled “Muslim refusenik”‘s take on her own religion, especially since the book caused quite a ruckus when it came out eleven years ago. I am a fan of Manji and while I can listen to her on the radio or on television for hours, I found the colloquial language in her book off-putting. Manji stated her writing style at the very beginning, but adjectives such as “kooky” don’t belong in a critique of Islam. She asked (and answered) many questions throughout her open letter, not all of which were rhetorical. She was not afraid to ask a sensitive question or to make a damning point about Islam, and often cited the Koran to reveal its contradictions, especially what it says about the treatment of women. The most striking point she made about Islamist extremists is that when compared to fundamentalist Christians or ultra-Orthodox Jews, only the Islamists have a steady stream of suicide bombers on call. You won’t find Judeo-Christians blowing themselves up at Saks on Black Friday.

I learned about the history of Islam and its similarities with Judaism and Christianity, and the common origins they all share. Manji informed the reader what the Koran does and does not say about women and other religions. She called desert Islam or tribal Islam the most pernicious form of the religion, causing the most harm to religious minorities, women, homosexuals and even other Muslim sects.

Often Manji would make a statement that another writer would have immediately marked with a note. I felt drawn to the back of the book anyway, reflexively looking for endnotes. This lack of notes was deliberate:

“I wanted The Trouble with Islam to feel as immediate as a conversation, so I chose not to interrupt the flow of this open letter with source notes.”

However I wish Manji had labelled her remarks accordingly with the sources she quoted from. Pages of recommended readings didn’t tell me where she got the material I most wanted to read more about.

In spite of the reputation Manji has for making provocative and intelligently-expressed statements about Islam, I found that the format of presenting these ideas in an oral discourse on paper to be lacking. I would have preferred an academic approach without hipster vernacular, backed up by endnote references. Manji’s approach was lacking in that it didn’t get me angry enough; by the end of the book I was left feeling that I could snicker and shrug the trouble with Islam away.