The Truth About Fonzie 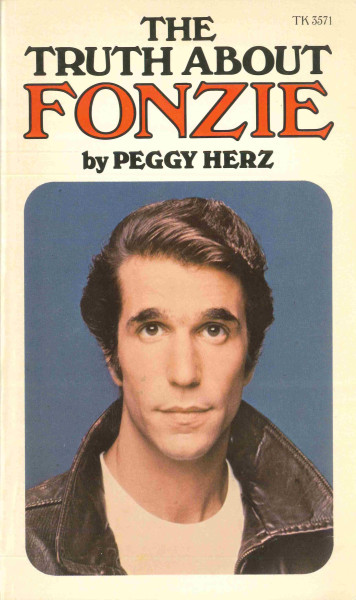 The Truth About Fonzie by Peggy Herz was published by Scholastic Book Services in 1976. I ordered books from Scholastic throughout my time in elementary school, however I acquired this book as a library donation reject. It was brief–107 pages–yet was remarkably wise in tone for its intended reader base. Winkler was born in 1945 so he was already in his thirties while playing Fonzie, who was a high school student. The depth Winkler brought his character was more as a result of his age and of having lived his working life as a studied actor. Winkler revealed a degree of Zen maturity not usually found in preteen celebrity bios. His advice for his readers is advice that I believe he himself follows, which is the need to remain grounded in a world full of overblown egos:

“People think they are doing you a service by giving you words. They tell you who you are. They say, ‘You’re a star!’ ‘You’re the best!’ It’s so out of proportion. You start to believe it! Then you say, ‘But if I’m so good, I should be working!’ You find you may be popular but many people haven’t heard of you–or a producer may have heard of you and think of you just as a comedy actor. But,” Henry added philosophically, “it will come to me.”

Although the book focussed on Fonzie, there were individual chapters on other “Happy Days” characters, including Potsie Weber as portrayed by Anson Williams. In an interview with the author, Williams revealed:

“As an artist, you’ve got to stay away from all that awards junk. If you win, it’s fine, but people make more of it than they should.”

How true. I was immediately reminded of blacklisted former soap actor Brenda Dickson, who still brags about and poses with her sole award, that for Outstanding Villainess of 1988, on her website. An insignificant vanity award from 28 years ago should not go to one’s head, but for Dickson, it has.

As a regular Scholastic customer from over forty years ago, I had many of Herz’s books. The Truth About Fonzie was not a lightweight juvenile biography. I credit the tone of this one to Winkler’s level of maturity in not speaking down to his audience. Kids can handle Winkler’s philosophy of life. This philosophy is timeless, so we have a forty-year-old biography which, surprisingly, does not seem dated.