The Unofficial Gay Manual: Living the Lifestyle Or at Least Appearing to 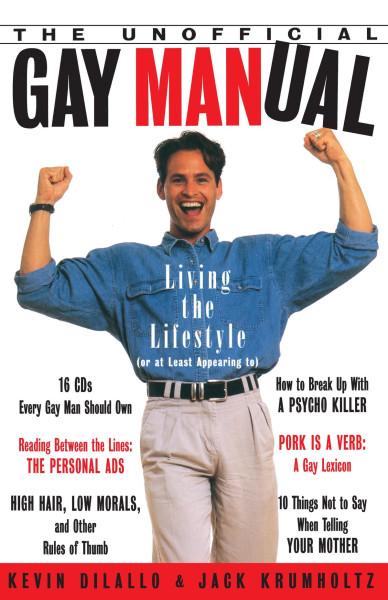 I bought The Unofficial Gay Manual: Living the Lifestyle Or at Least Appearing to by Kevin DiLallo and Jack Krumholtz at Glad Day Bookshop in Toronto in 1995. I found the book to be a humorous perusal yet in the quarter century that I have had this book I never picked it up to read cover-to-cover until now. My blog has already featured a review of a similar book, The Homo Handbook: Getting in Touch with Your Inner Homo by Judy Carter from 1996. Unlike that book, The Unofficial Gay Manual was less cerebral and more of a fun read which was campy at times and never took itself too seriously. However, in the twenty-six years since it was published, much of the humour seemed dated. The front cover style and the photos within certainly reeked of the nineties. One page dealt with “The gay man’s purse: the gym bag” and listed all the accoutrements required within for a young gay man about town. I list below all the objects no longer needed in the year 2020: “address book, checkbook, scraps of paper with names and phone numbers, Walkman, tapes, $1.25 in quarters and assorted loose change (for pay phones)”.

With a publication date of November 1994, the Manual predated the Internet and its revolution in the field of gay dating. At that time, the high-tech way of the future was personal ads and chatlines. AIDS and HIV medication has advanced such that while not cures, a diagnosis now is not as harrowing as it used to be.

Even if I had read this book once I got it, it still would have been too late to instill in me the sense of pride I needed. I rarely look back at my life and wish I had done things differently. I am not one who wallows in self-pity or moans about past events that I can’t drop and get over, but my first Pride Day was a memorable event, yet not for all good reasons. This was a rite of passage in the summer of 1994 that I was looking forward to. I would be attending the parade with my first boyfriend, and had decided what I would be wearing days in advance. I arrived at my boyfriend’s apartment that Sunday morning so that we could attend the event together. I was excited to be going and was already dressed for the occasion. Yet my boyfriend took one look at me and gave me a silent No as he slowly shook his head back and forth. I was crestfallen. His expression of disapproval broke my heart, which still resonates twenty-six years later as it was such a blow to my developing sense of pride. How I wish I could have read what the authors would later write:

“Coming out doesn’t mean you have to leave your individuality stashed away like an old leisure suit in the closet you just escaped. In the gay world you have the freedom (and acceptance) to be whatever you choose, not somebody else’s idea of what it means to be gay.”

And so on my first Pride Day I recreated my image to suit my boyfriend’s preference. I wore his clothes, which were too big for me, because he didn’t think my outfit was good enough. It took me four more months to realize he was a controlling jerk and he was genuinely shocked when I dumped him–but I chalk that up to a life lesson learned.

The Manual is partly Queer Eye for the Gay Guy, with lists of recommended books, movies and music. Lengthy descriptions of gay-friendly cities and resorts profiled the local clubs and restaurants which may no longer be in business now. You can learn about reading body language in gay bars and the stereotypes of certain clothing styles.

The gay lexicon at the end had me confused when I read “Canadian adj. gay”. Really? Who in the States back in 1994 used “Canadian” as a synonym for “gay”?

In 2020 this book is best suited for the gay and lesbian archives.