The World’s Most Dangerous Places 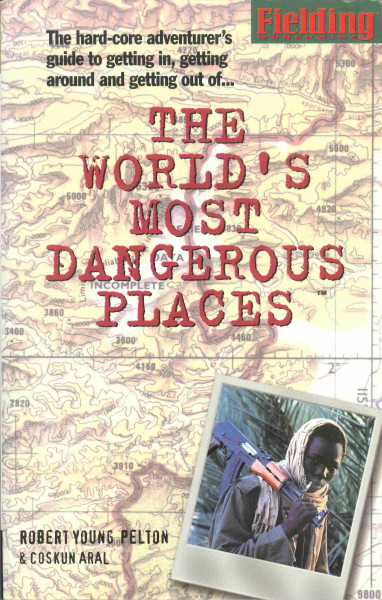 I have just finished reading the first edition from 1995 of The World’s Most Dangerous Places (formally Fielding’s The World’s Most Dangerous Places) by Robert Young Pelton & Coskun Aral. What I thought would be a can’t-put-down chunker of a read turned out to be a tedious 974 pages. I must seriously rethink my personal policy of finishing every book I open, regardless of length, even when I can’t stand it from page one. This was one such unfortunate read. The book alternated among three different fonts where two of them were too small for me to read without a magnifying glass. Perhaps a book so voluminous in its information and country coverage was never meant to be read cover to cover. Maybe most readers picked a country or theme at random and never read other sections, or if they did, chose to read them casually. Just not like I did, straight through from page 1 to 974. A book as long as this was repetitive and full of spelling errors. An editor would have caught all this. Its repetition of facts was a major contributor in why I found the book to be so boring.

I acquired this book as a rejected library donation and did indeed peruse it when I got it, reading at first the sections on North Korea and Georgia (the latter a place I was seriously considering going to in the early 2000’s). It sat on my bookshelf for close to twenty years when in my last book purge and library cleanup I decided to read it in order to finally part with it, as 1002 pages (with the index and other pages) sure takes up a lot of shelf room.

The problem with a travel book close to twenty-five years old is that so much of the information is out of date. I noticed this especially when I reread the chapter on travel to North Korea. And the authors go on and on about homeland terrorism and the attack on the World Trade Center–the bombing in 1993, that is. I do not fault anyone for the book’s untimeliness, and can only ask myself why I would bother continuing to read it (I started it on October 19) if everything inside was old news. Surely there is a more recent edition of this book? Yes there is–and it’s longer, and I have it. Sigh. Time for the psychiatrist’s couch.

The book had very few moments were I felt riveted in my reading. A couple passages below illustrate how wise it is not to travel in a country in the midst of war. Coauthor Aral was dodging gunfire in Lebanon and wrote:

“Then it happens: first a giant flash of white light, followed by a shock … around me everything seems to be rocking and I lose consciousness for a minute… When I wake-up again I can see nothing but dust. I remember thinking only then that it must have been the explosion of a shell. Everything is so silent that I think I have lost my sense of hearing.”The dust settles and I realize that I am surrounded by the pieces of hacked bodies. Perhaps you can imagine my reaction… I panic. The next thing I remember is that I can hear again, people are shouting and running in every direction. Around me nothing is the same anymore: tables upturned, glass broken, dust, rubble…blood, torn limbs…and so on. I look at myself frantically. I have been lucky. I am complete, without even a bruise, but I am trembling. Then I see them: Saleh’s eyes, wide open, transfixed, staring at me. The explosion had instantly killed most of the people who were drinking tea around us. Only Saleh, the Syrians and I were spared.”All of a sudden a man comes to the scene from the burning petrol station, brandishing his Kalashnikov. He starts yelling that I am a spy, responsible for the bombings and that I ought to die. He shoots in my direction. For a second I am petrified. Saleh understands the danger faster than I and he shouts at me to run away to a safer place. Thanks to his intervention, I realize that my life is at stake and I start running away as fast as I can leaving the burning petrol station behind me.”Nobody has followed me. I shut myself in a bath cabin. And I cry and cry and cry…”

Whereas during the massacres in Rwanda:

“We had all emptied our stomachs when the stench first hit us–a natural and healthy reaction to human decay–but I continued to wretch as nausea came over me in waves. The people had fled to the church afraid for their lives. They had been taught that the church was the place of last refuge. They were wrong. Men armed with machetes ordered them into the garden and began to slash and cut them. Some tried to escape. One man’s upper torso was halfway up the metal ladder on the church steeple. His lower torso and legs hung half a meter below..”Inside the church a man lay hacked to death at the altar. Piles of bodies lay among the pews. My other memories are bizarre. I remember being covered in fleas and the dark shadows that dead bodies leave on the ground long after the dogs have dragged them into the bushes and I remember the strange grimacing expressions of their contorted faces as they putrefy.”We returned the way we came, knowing that we had captured mankind at its most base. The perverse irony of this sin being committed in a church made it even more surreal.”

Some lines were priceless in their succinctness:

“Airline passengers are more likely to be killed in Russia than anywhere else in the world.”

Aside from a play-by-play of countries to avoid and why, the authors provided chapters on bribery, terrorism, land mines, kidnapping and getting arrested: all of which are possible outcomes when travelling to shady places. They ended the book with chapters on international organizations that work toward making the world less dangerous. I have a much later edition of the same book and scanned through it to know that it is much more than an updated edition of this one, the inaugural edition. I wonder if it will be as painful a read.