This Team is Ruining My Life (But I Love Them): How I Became a Professional Hockey Fan 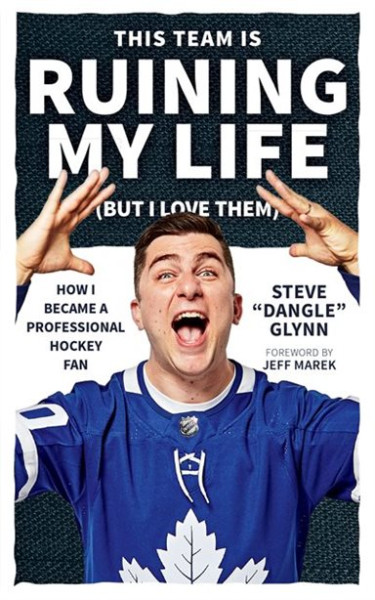 I picked up This Team is Ruining My Life (But I Love Them): How I Became a Professional Hockey Fan by Steve “Dangle” Glynn because it was a new book and the title as well as the cover photo looked interesting. I could certainly identify with the author, a devoted Toronto Maple Leafs fan whose hope for another Stanley Cup victory remains undying. The lengthy title sums up the contents, which start with Glynn’s ventures into making his own YouTube videos following every Leafs game. From an audience of dozens, Glynn used his YouTube credentials and Leaf-loving perseverance to find a variety of jobs at sports networks and websites, He was able to go from nothing to “working at the toy store”.

The book reads like a plumped-up resume, listing every job–no matter how short–in Glynn’s professional life. This format may not appeal to some readers, yet I could not put this book down. Glynn told his life story with the candour usually seen in diary entries. Insecurities are revealed and dealt with, and many chapters end with a life lesson learned, such as:

“No matter what your specialty is, it’s worthwhile to know the intricacies of the other roles around you. It’ll make you better at what you do and a better coworker.”

“So when you speak your mind, speak the truth. Think before you speak, have purpose and evidence to support what you say, and be confident in your words, even if somebody gets in your face.”

Glynn is upfront about his battles with anxiety and the value of therapy. This Team is Ruining My Life does serve at times as a personal diary in which he chronicles his bouts with unexpected tears and crying fits. I wondered if he would explain these bouts, as they happened frequently, but he did address them in the second half of the book.

There were a number of poignant moments that struck me as I read. The most memorable was that I was reading it on the tenth anniversary of Sidney Crosby’s gold medal-winning goal at the 2010 Olympic Winter Games in Vancouver. Glynn wrote about watching the overtime game between Canada and the US on February 28, 2010 and here I was reading all about that glorious event exactly ten years later. Two other moments were profound. After we just lost Kobe Bryant in a helicopter crash, Glynn shared a story about sports personality Cabbie Richards, which began with:

“In 2009, Cabbie famously got to ride around with Kobe Bryant in his helicopter.”

And he had a certain remark about Don Cherry:

“The essay I wrote was called ‘Sour Grapes,’ and it was about how Don Cherry could get away with saying literally anything on-air.”

As a YouTuber Glynn forged his own personality and style, and Leafs fans could identify with him as he expressed his honest opinions about the state of the team. He let it all hang out in his book, with exasperated rants that read as well as they probably seemed when expressed live. I particularly liked this one defeated sad rant:

“The Leafs crashed back to reality and totally sucked, yet again, missing the 2011 playoffs.”

Some sports broadcasters are known to be opinionated on a wide variety of topics (remember Don Cherry) and Glynn got it right about his interactions with some Americans:

“Americans have a lot of nerve goofing on Canadian accents. Whatever they speak in Pittsburgh, it’s not English.”

How true. I finished this book while on holiday in Florida and an American resident of the sunshine state, upon hearing me speak, treated me like a freak show. It was insulting and annoying for me to defend my Canadian accent with a smile as I struggled through her own Bronx accent, which I never even referred to in my defensive retaliation. I guess Canadians are too nice.

Three errors struck my attention. Steve, if you reprint this book, please fix the following gaffes (italics are mine):

“The most encouraging feedback came from Justin Bourne, a former professional and college hockey player, who had wrote about the punk test for TheScore.com.” (p. 235). Should be who had written or just who wrote.

“Each team got to pick one NHL alumni to play on their team with them.” (p. 311). Alumni is plural. Should be one NHL alumnus.

I must confess that even though I had never heard of Steve Glynn before I picked up his book, I had no desire while reading it to check out his videos on-line. And now that I have finished reading this book and written its review, I have still not bothered to look for him on YouTube. So I suppose I can call myself a fan of Dangle without ever seeing any of the work he is famous for. I also don’t spend my spare time surfing through YouTube so if I’m going to encounter Steve Glynn on camera it will likely be in the context of a hockey broadcast I am already watching. So Dangle–you’ve got a fan who’s never even seen (or heard) you in action. Keep up the good work.