Through Siberia by Accident: A Small Slice of Autobiography 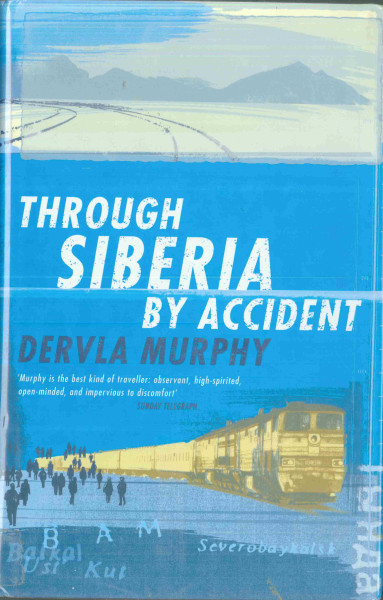 I heard about Through Siberia by Accident: A Small Slice of Autobiography by Dervla Murphy from a book I read a month ago, To the Edge of the World: The Story of the Trans-Siberian Express, the World’s Greatest Railroad. Its author, Christian Wolmar, made repeated references to Murphy’s book and I enjoyed the cited passages so much that I felt I had to find a way of reading Murphy’s own travel diary, relating her experiences crossing Siberia by train in 2001. Thanks to my library system’s interloan service, I was able to acquire a copy from the St. Catharines Public Library.

Dervla Murphy, now in her eighties, has written twenty-five books about her travels around the world by bike. She is the octogenarian I would like to be: still on my bike, travelling and writing about it. Her efforts to get her new bike (nicknamed Pushkin) on board the train were a comedy of old Communist bureaucratic proportions, needing the documentation for this, needing to line up for that, then needing to bring Pushkin to the train station so many days in advance. Sure made my own experiences bringing my bike aboard trains, buses and ferries seem totally effortless (which it was) when I cycled around the far north of Finland, Norway and then the Åland Islands. Her efforts were all for nowt anyway. Through Siberia by Accident was told entirely from a train or from hobbling about on foot. Her cycling plans were sidelined by a train accident when she fell on the slippery soapy floor of a Baikal-Amur Mainline railcar. An injured knee plagued her throughout her journey, yet it also gave her the opportunity to experience Siberian hospitality and kindness in a more intimate way than she could have as a cyclist.

Murphy did not speak Russian and most people she encountered spoke no English; her main methods of communication were her trusty pocket dictionary combined with sign language. The people she met embraced her at every stop. Murphy was a beloved Irish babushka in the eyes of her fellow travellers, who delighted in showing her around their towns. Locals accompanied her to ticket offices and offered to drive her when it was impossible for her to walk anywhere. The people she met onboard provided her with adventures, plenty of food and free accommodation. She raved about Siberian hospitality:

“Once a foreigner’s reason for being in Siberia is understood, Siberian hospitality takes off and is limitless but the region presents some difficulties for solo non-Russian-speakers who may be viewed as inexplicable phenomena best avoided.”

She was treated to feasts everywhere she stayed. At the end of the trip, Murphy knew she had gained a few pounds. There were times, however, when Murphy really wanted to be on her own, and her new friends would not (or could not, for the pain of causing offence) take no for an answer.

Through Siberia by Accident was filled with rich portraits of the colorful taiga. Murphy’s descriptions of the silvery blue Lake Baikal were different as each day the lake revealed a new colour or attribute. Murphy’s Siberian palette was sometimes icy grey, shrouded in pink streaks of clouds, or alternatively azure and cloudless. I could feel her awe and wonder in each landscape description. Murphy’s descriptions were her strength, and most of my chuckles were from reading her impressions of the remnants of the Soviet system:

“Soviet construction brigades used to boast that they could complete one such block, containing 360 flats, in six weeks–which must partly explain their many and various defects, like my shower’s overflowing on to the bedroom floor.”

Murphy supplied plenty of occasions where this Irish babushka was confounded–or maimed. After her debilitating slip in the train’s washroom, and a later incident where she injured herself after collapsing through an outhouse toilet, Murphy later suffered a burned scalp:

“Here the rooms ($8.30) go in pairs, two sharing a tiny hallway and loo with wash-basin; downstairs is a communal shower-room where on arrival I scalded my scalp, a minor mishap yet quite painful for days. No one had warned me that Siberian pipes sometimes deliver water that is literally boiling.”

Yet it was precisely this old Soviet system which birthed a mentality that kept a state of peace and calm among the Siberian population. After too many breakdowns on a bus journey, Murphy noticed the relaxed attitude of her fellow passengers. No one was irritated, testy or burst to yelling at anyone:

“Contrasting such Irish/British ordeals with my M56 experience, I suggested to Pavel that there is much to be said, from the mental health angle, for Siberian laidbackness, generating a communal atmosphere of calm resignation. The seething resentment felt at home by overcharged, inconvenienced passengers achieves little or nothing, is an expense of emotional energy in a waste of anger.”

On occasion I had to take notes because I did not grasp Murphy’s references. While I could understand what she meant by context, I had to check on-line for the meanings of NBG [ = no bloody good] and the very last line of the book was ruined as I had to think–for just a couple seconds–what OAP meant:

“OAPs are entitled to go for the escapist option.”

Meaning old-age pensioners. NBG and OAP: okay so maybe I don’t get out much.

I would be happy reading further Dervla Murphy travel tales, and I feel that if I met her, I could listen to her talk about her travels for hours. What an inspiring woman: biking, travelling, and writing all about it. I love her.