To Be Perfectly Honest: One Man’s Year of Almost Living Truthfully Could Change Your Life. No Lie.

Canadian humorist and Christian speaker Phil Callaway has written a diary documenting his year of living truthfully. His goal was to be entirely honest about everything to everyone and then to document the consequences. If his wife asked if a pair of jeans made her look fat, what would he say? If hosts asked how much he enjoyed dinner, how would he respond? I was prepared for a story about damaged relationships, a broken marriage and a year’s worth of self-incriminating flagellations, but To Be Perfectly Honest: One Man’s Year of Almost Living Truthfully Could Change Your Life. No Lie. disappointed in not being funny enough. 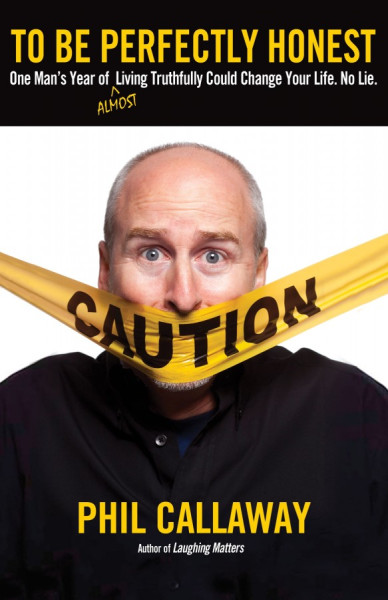 The blurb on the back cover, however, seemed appealing:

“Phil promised to tell the truth for an entire year, and he wasn’t joking. Twelve months later, his journal was crammed with successes, near-successes, and outright failures. During his year-long experiment with veracity, he made a disastrous financial investment, fielded hundreds of intrusive questions from friends and strangers, attended a thirty-year class reunion, and waded into possibly the most revealing–and hilarious–situations he has ever documented.”

The book certainly started off as a hilarious page-turner. I was laughing out loud for the first twenty pages. The funniest parts at the start of To Be Perfectly Honest were the moments when he shared his plan with his friends:

“I mentioned the book idea to friends who have known me for years. I said, ‘I am considering taking a truth vow.’ Without exception, their eyebrows shot up to their bangs, though one said, ‘Isn’t that a bit like giving up arson for Lent?'”Yeah, sort of. But that didn’t stop me from accepting the challenge. And in no time I encountered the first major drawback. Having shared openly that I was now solely a truth-telling individual, I found that some of my friends insisted on getting a straight answer to things they’d wondered about since fourth grade.”

“Day 31. I received more e-mail input from friends who are taking advantage of this opportunity to hook me up to the self-inflicted lie detector.”

and three days later, one can feel his exasperation:

“Day 34. I did it to myself. I asked people to send in any question they wanted me to answer, with the promise that I would respond truthfully. It’s like releasing rabbits into a cheetah cage.”

Callaway is a humorist, and sometimes makes his quest more hyper-literal than hyper-honest. For example, when in church, he sees the cards that one fills out asking “Is there anything we can do for you?”. Instead of answering with a predictable request such as “Please pray for my sick mother”, he replies with “Please come over and mow my lawn”.

Callaway had been building up his upcoming thirtieth high school reunion yet barely talked about it. He decided to be honest with his now middle-aged body and chose not to disguise it (and thus lie through couture) by choosing not to wear a shirt with slimming vertical stripes. However it would have been hilarious had he gone to the reunion and revealed to his former fellow classmates what he actually thought of them.

Honesty was thus expressed not only through his words but also by what he wore. Callaway also stayed faithful to his truth vow in yet another way:

“By now I am so into the honesty thing that a bad joke doesn’t draw a response from me. The laugh wouldn’t come. Milton looked at me like you look at a little old lady accused of arson.
“‘Milton, I have taken a truth vow. How can I be completely truthful and laugh at a joke I do not find remotely funny?'”

Callaway wrote in an oral style, as if he were transcribing a comedic monologue. His dialogue, especially with his wife Ramona, is loving and shows the unbreakable bond they have shared since meeting as high school sweethearts. She supports him on his year-long quest to be an honest man, and pokes fun at him at times. She is even understanding when he confesses his desires to be with other women. He however doesn’t act on these feelings, which in effect would be like justifying his desire to fool around in order to be true to his honesty objective.

I laughed out loud when he skewered home-schoolers:

“Day 305. Today I spoke to a large group of public-school teachers. I enjoy speaking in nonreligious settings, although I didn’t know there would be several thousand in the audience. I started out telling them, ‘It’s a little ironic to be asked to speak to you, because I was homeschooled’–there was an uncomfortable pause, during which I could almost hear someone sharpening a harpoon–‘until the age of five, at which point my mother gave up on me and turned me over to our educational system.'”

After one year of being perfectly honest, Callaway reflected on the effect it had had on him:

“A friend asked me what I’ve learned from my full-immersion truth vow. Where do I begin? For starters, I’m more honest in prayer. This thing about trying to impress God was laughable. I’ve also learned how far short I land trying to rig things on my own. I speak the truth more speedily now, less concerned with what people say about me when I’m out of earshot. I’ve learned to be kinder to others, having never walked around in their slippers. And I’ve learned to appreciate the words of the great American theologian Tim McGraw: ‘Live like you were dying.'”

To Be Perfectly Honest was not the riot of a read I thought it would be. The final chapter, about the death of his mother from dementia, is almost tear-jerking. Callaway does take an attitude towards death that I myself share, and he is comforted by his mother’s release from her mental incapacity and by her reunion with her Saviour and late husband. He gets through this by finding humour even in his mother’s declining state, and his reminiscences are both tender and saddening. To Be Perfectly Honest is a book of humour after all, and although the laugh-out-loud moments weren’t many, they made the book nonetheless a worthwhile read.