To the Edge of the World: The Story of the Trans-Siberian Express, the World’s Greatest Railroad 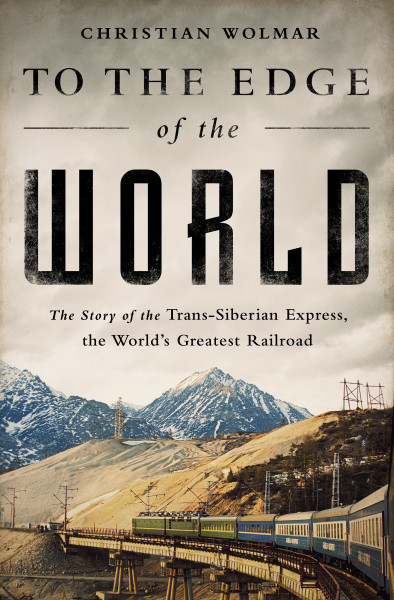 To the Edge of the World: The Story of the Trans-Siberian Express, the World’s Greatest Railroad by Christian Wolmar was a brief history and a fascinating, speedy read. I came across it, as I often do, since I am in charge of the new book arrivals in my department. I like trains and transit history and To the Edge of the World served as my first formal introduction to the Trans-Siberian Railway, the longest railway in the world.

For a nation as vast as imperial Russia, the country embarked on a system of railroad construction relatively late, when compared with Europe, the United States and Canada. Such a lengthy railway would link Moscow to the Pacific coast, bring raw materials out of the heart of the nation’s central Asian mining region and bring products and services to the people of the interior. It could unite the country in a way that the Canadian National Railway linked Canada from coast to coast, an achievement that did not go unnoticed by those in power in tsarist Russia. However the main reason the Trans-Siberian Railway was built was not economical:

“The military imperative was also given a boost by the completion of the Canadian transcontinental in 1885, given the shorter journey time between England and Japan, which was seen as a potential military advantage. Psychologically, for the Russians, the construction of the Canadian transcontinental proved more important than its American predecessor completed sixteen years previously. Canada was a similarly vast, rather underpopulated country and its furthermost province, British Columbia, could well have seceded had it not been for the construction of the line across the new nation. The Russian Far East, like the Canadian West, was remote and semi-detached. If the Canadians could use a railway line to bind their country together, so could the Russians.”

Thus imperialist Russia was compelled to build its transcontinental railway for militaristic reasons. By the end of the nineteenth century the country had already suffered a rebellion and tsarist Russia was showing signs of instability. A railway would strengthen the tsar’s hold over the country from Moscow to Vladivostok. Yet with Alexander III as tsar, there was haste to complete the job. Workers and engineers risked repercussions by questioning him, and the earliest work on the railway was slipshod, requiring repairs or replacement almost as soon as it was completed. Wolmar wrote of two Trans-Siberian Railways being created at either end: the new track being laid down on its stretch eastward, and the replacement of track at the beginning of the line. The rush to complete the railway left minimal time to plan its route. Yet with 9288 km of track to lay down, you don’t have to be an engineer to realize it would require years and years of planning and surveying:

“The survey work undertaken before construction began had been cursory in the extreme. There was no attempt to select an optimum route, but instead a four-verst belt was haphazardly drawn on the map by the administration in St Petersburg and consequently the surveyors in the field examined only this small swathe, irrespective of whether it appeared suitable.”

The ten-year job to create the railway seemed like a daily comedy of errors, as workers stumbled across uneven ground, mountains, rivers and lakes. It took a century of corrections to realign the track so that it skirted around these natural hazards and features, instead of going directly through or over them. When the track reached a lake, like the massive Lake Baikal, a ferry carried the train to the other side. In winter, the frigid Siberian temperatures permitted track to be laid across the ice. I would be sweating bullets if I knew my train was crossing a frozen lake. I would not be confident that the most voluminous lake on the planet would be sufficiently frozen to support a train. Laying track in the Siberian permafrost posed the greatest problem, for when the disturbed permafrost melted, the tracks as well as the structures built around them like train stations quickly started to sink.

Finding workers to build the railway was not easy since Siberia had such a sparse population. From imperialist times to the communist era under Stalin, prisoners deported to the Siberian gulags were sent to work. In the time of the tsars, however, prisoners received reduced sentences for their efforts. Conditions were unbearable, working six days a week in the coldest temperatures with nothing more than a tent as shelter. Working conditions were indeed primitive:

“The true story, however, is that day after day, week after week, tens of thousands of workers mostly armed with little more than pickaxes and shovels created this monumental railway.”

A century after the construction of the railway shows a necklace of large cities across Siberia. Where did these people come from? One aftereffect of railway construction was not foreseen:

“While the railway may have been conceived by its principal promoters as an imperialist and military enterprise, the impact on Siberia was no less profound. For all its failings and inadequacies, the Trans-Siberian had a transformative effect on the region, beyond even the expectations of its most ardent supporters. The clearest change was the rapid increase in population, thanks to increased migration from European Russia. The Siberian migration was, according to its chronicler Donald Treadgold, the greatest movement of people in history up to that time, other than the arrival in the United States of vast numbers of Europeans during the nineteenth century. While the increase in Siberia’s population started before the railway was built, the pace of immigration rose dramatically as a result of its construction, and for a decade or so after the completion of the first section in 1896 there was a virtual stampede to settle in Siberia.”

“Not surprisingly, this stream of people led to the transformation of the region; the very look and feel of Siberia changed forever through rapid urbanization and widespread settlement near the railway. This was inevitable given that settlement, with few exceptions, was confined to a swathe of land about 125 miles either side of the tracks.”

To the Edge of the World was an exciting read about one of the world’s engineering triumphs. After all the kinks had been ironed out and the track properly relaid, the Trans-Siberian Express became a land route to crisscross Asia taking originally from as long as six weeks to as little as six days. Wolmar took such a trip and added his impressions to the text. It was humorous to read that many of his impressions (especially complaints) were identical to travelogues from a century ago.