Tristan da Cunha and the Tristanians 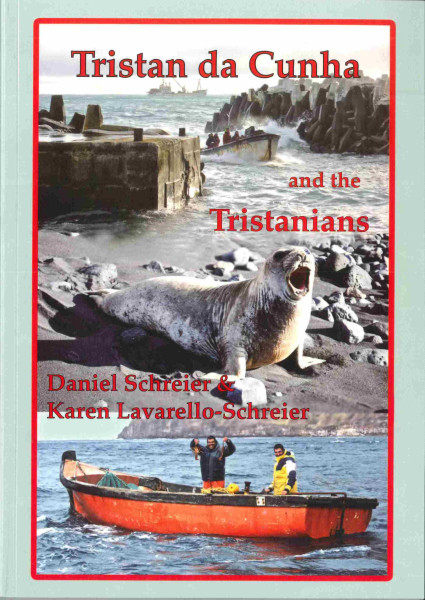 Tristan da Cunha and the Tristanians by Daniel Schreier & Karen Lavarello-Schreier is a 2011 update of Tristan da Cunha: History, People, Language published in 2003. The later edition has been expanded by 50%, bringing its page count to 136 versus 88 in the first edition. I bought TdC and the Tristanians while I was on the island and I had the opportunity to meet one of its authors, Karen, on board the Agulhas II en route to Tristan last September. We kept in touch during our stay on the island.

Technology is taking over Tristan, and while this book was written only three years ago, I found that when I was on the island, several points the authors made about modern Tristanian society were already outdated. Much to their credit, both authors did take the effort to carefully update their earlier edition by stating the ways things used to be in 2003 and how they were in 2011. But in the past three years, or two specifically, since I was last on Tristan in October of 2013, the island has seen such an increase in Internet connections that the island is no longer limited to two hours each day as the book indicates. Tristan’s only Internet café is “turned on” each morning and afternoon (for paying customers) and it closes around 5 p.m. each weekday. The café is closed on weekends. The connection is provided in private homes on weekday evenings and all night long, and all day on weekends. At the home of my host family, I would stay on-line for hours, engaging in on-line chats with my friends back home (five hours behind in Eastern Standard Time) long after everyone had gone to bed, so the two-hour daily limit is definitely history. I also wondered about the statement made about the island’s local currency. The authors state “British and St Helenian pounds are the local currencies” yet I recall a sign in the post office that stated that the St. Helenian pound was no longer accepted.

TdC and the Tristanians contains new research about early Tristanian history, and Schreier, who is a professor of linguistics, has added more about the Tristanian idiom of English. He fears for the idiom’s survival as evidence shows that young people are not using uniquely Tristanian words and expressions as much as their elders. However nothing can compare to Schreier’s own book devoted to the dialect, Isolation and Language Change: Contemporary and Sociohistorical Evidence from Tristan da Cunha English. The authors supplied a new emphasis on the fragile island environment, conservation, and the plague of invasive species and eradication efforts. There is also a mention about how the island is overrun by cars. I wouldn’t have believed it if I hadn’t seen it with my own eyes, but yes, cars are everywhere on Tristan. There’s hardly anyplace to drive to, except the Patches where the potato crops are.

Karen and Daniel added new photos throughout the updated edition, and Karen gave more personal anecdotes about growing up on the island and the way Tristanians talk. I thoroughly enjoyed Tristan da Cunha and the Tristanians and it is the best book around today about the island’s history, its people and its language. One can find the book for sale here.