Two on the Rocks 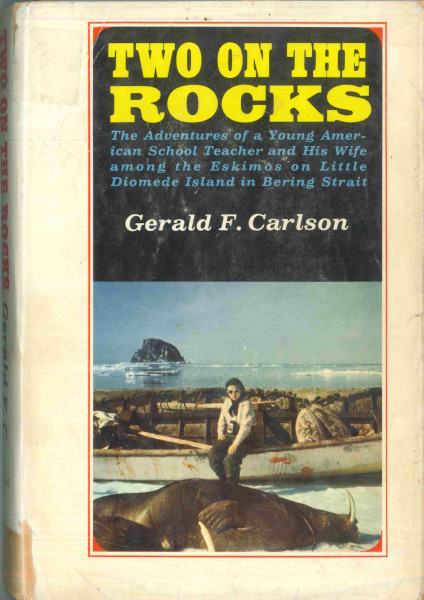 Two on the Rocks by Gerald F. Carlson is the author’s account of his time on Little Diomede Island where he served as the sole schoolteacher. Carlson and his wife Donna spent a year on this tiny isolated island of just over one hundred Diomeders and dozens of undernourished dogs. Carlson published his memoir in 1966 however the actual date of his time on Little Diomede was never mentioned. I have deduced that he spent his year there in the mid-fifties. As an account from over fifty years ago, Eskimo was the chosen term as both an adjective and noun to describe the local population. Today an author might use the specific term Iñupiat or, in more general terms, indigenous. Carlson often referred to the islanders specifically as Diomeders. What drove me to like Two on the Rocks instantly was its humour. On such an isolated island a sense of humour might be the last thing on your mind when all you wanted was a flush toilet or something new to read or to eat, but Carlson managed to stay upbeat and always found the lighter side of life during his stay. Often I had to put the book down to laugh as Carlson’s humour was a tad risqué for the 1950’s. He did not shy away from sex stories nor those from the gorier side of subsistent existence. I sped through the book because Carlson wrote in an oral style that I could imagine being read aloud. It was informal as well as informative. Some of the passages that made me laugh, as well as want to read again, I have recorded here. In describing a visit from the Coast Guard cutter Storis, Carlson wrote:

“Donna and I quickly elected to ride out to the Storis, and I stayed to help the men drag Herbert’s oomiak across the beach while she dashed to the school to get the island’s only life preserver, a relatively useless item in that it would probably save the wearer from a quick, merciful drowning just so he could freeze to death.”

Although he alluded to the next alleged custom early on in the book, it wasn’t until page 111 that Carlson addressed it directly:

“More drivel has been written about the love and sex customs of the Eskimos than any other facet of their remarkable lives. To the moral disquietude of those readers with lascivious inclinations, let me state now, unequivocally, that I have never been offered the wife or daughter of any Eskimo as a sleeping partner.”

Little Diomede Island would present life and nature in a totally new way to outsiders. Carlson expressed some imagery in beautiful similes:

“Many diverse species of mosses and lichens cling tenaciously to the rocks in various shades from gray to green, and even yellow. Here and there a patch of whitish reindeer moss, looking very much like entwined ashes of completely burned crooked cigars, can be found nestled among the rocks.”

“By the twenty-first of December the sun barely has the strength to peek over the horizon to the south-southeast at 10:30 A.M., where it rolls briefly on the edge of the earth like a mercury-coated dime…”

The role of island teacher brought with it many more informal duties, the most important of which was that of unofficial doctor. Locals would radio the mainland for medical advice or if in need of an urgent evacuation, yet the teacher, on account of his reputation for omniscience, was the go-to man for islanders’ immediate medical needs. I cringed and twisted myself into awkward contortions as I read about some of Carlson’s medical exploits. Carlson was spared offering layman’s dental services, as tiny Little Diomede already had an eager resident only too keen to handle the pliers:

“Our Eskimo dentist wasn’t the strongest man on Little Diomede, but he was certainly one of the most zealous in all of Alaska. When no one requested his services, he would go out and solicit business. As a result, we had a continuous parade of victims who were having their teeth removed. I’m not so certain that they were all legitimate cases either. Our dentist was extremely persuasive–he operated on the theory that even a good tooth might ache some day, and it was best to have it done with before it became a problem.”

Island wildlife could be overwhelming at times. The Diomeders depended on the sea for their diet, and ate walrus, fish and seal, but they were not known as whalers. Birds were superabundant, and were the main source of food for the packs of wild dogs. Carlson described how the landscape could change overnight by the migrating avian population:

“The birds that nest on the islands are of many varieties and multitudinous in number. Although their stay is relatively short, it is unparalleled numerically anywhere. The birds arrive in waves. One spring night the islanders go to bed in quiet isolation and the next morning they arise Rip van Winkle-like to find themselves in a colossal aviary.”

Bush pilots made their living transporting anything and everything to these isolated communities, and Carlson told some funny stories about runaway reindeer aboard a plane. Yet having a reindeer ricochet off the walls of your small cargo plane was nothing in comparison to the ultimate extreme cargo haul:

“Another pilot we knew had a half-grown polar bear smash its way out of its crate while they were in the air. Fighting the animal off with one hand and cursing blue lightning about the unkind fates of bush pilots in general over his radio, the man managed to bounce safely into Nome only to be admonished by the FCC for using profanity over the air waves.”

Gerald and Donna agreed to spend a second year on the island teaching, but had to cancel their plans when Donna found out that she was pregnant. Thus their departure was rather sudden. In summing up his time on Little Diomede, Gerald wrote:

“Quite frankly, I had come to prefer the isolation of the island. The superficiality of the civilized world’s affairs seemed very far away and ridiculously inconsequential. Each day spent on the island served to increase this comfortable feeling of detachment. In a sense, I suppose, I had slipped into a primitive psychological state where only the present counted. It was sublimely relaxing to be free from the petty details and concerns of modern living.”

Both Carlsons looked back fondly on their Diomede experience for the rest of their lives. This love of isolated Alaskan outposts would be passed on through the generations. If I like a book so much that I rave about it to everyone before I even finish it, I am also compelled to contact the author. Since Two on the Rocks was published over fifty years ago there was a chance that neither Gerald nor Donna would still be with us. Sadly, Gerald died in 2011 at the age of 85 and Donna died in 2015 at the age of 86. I was however able to locate their granddaughter, and we had a lovely exchange of E-mails and shared memories and travel stories. I am so glad I was able to find the Carlsons’ granddaughter, who assured me that the happiest time in her grandparents’ lives was their year on Little Diomede.

The cover of the book shows Donna Carlson and a walrus on the ice with Fairway Rock in the background. The book came with sixteen pages of black-and-white photos.