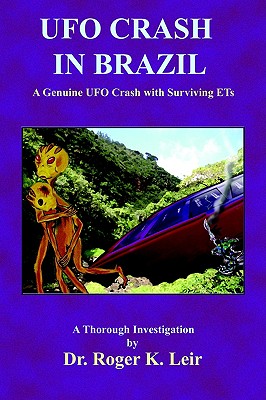 Readers of my reviews know that I do not believe in UFO’s or life on other planets. I firmly believe that we on Earth are alone in the universe. That doesn’t mean, however, that I don’t enjoy a good UFO story or alien abduction testimonial. I am drawn to these modern-day fairy stories and when my library acquired UFO Crash in Brazil: A Genuine UFO Crash with Surviving ETs: A Thorough Investigation by Dr. Roger K. Leir, I knew I had to read it.

UFO Crash was published by The Book Tree, a small publishing house in San Diego that deals specifically with metaphysical, spiritual and other controversial subjects. Unfortunately the publisher did not seek the services of an editor, as UFO Crash was littered with numerous spelling errors. How could a practising doctor release a book for publication that was so sloppily written? Let this be a warning to any author: I don’t care who you are or how many letters you have strung after your name, if you can’t write a sentence in decent English, you come off looking like a fool. The entire topic of your book is overshadowed by the fact that you are barely literate. I cannot write about UFO Crash without pointing out that Leir wrote it’s for its every time he wrote the possessive form. The capital city of Brazil is apparently Brasalia. If one claims to have written a “thorough investigation” about an extraordinary phenomenon such as a UFO crash with surviving alien beings, I am going to expect exceptional proof. That Leir couldn’t even get the names straight of key people in the investigation who either served as interpreters or interview subjects made me lose more credibility in his skills as an investigator. For example, the first name of his interpreter volleyed from being called Rudolfo or Rodolpho or, worse, a young woman who allegedly saw an alien was named Valquira, Valquria or Valquiria–a different spelling on three consecutive pages. Reduncancies also made me cringe: surely an editor would have trimmed “9:00 PM in the evening”.

So now you know that a blue-pencil grammar snob who doesn’t believe in UFO’s is going to review this book. UFO Crash is about an alleged extraterrestrial accident that took place in January 1996 near Varginha, Brazil. A number of aliens were reported to have survived the crash and were found near the site. Some aliens went into hiding and were discovered later. Leir conducted interviews through an interpreter with these eyewitnesses and with those who suffered in the aftermath of the UFO crash.

The interviews he conducted produced conflicting testimonies. The descriptions of the aliens differed wildly and dates didn’t coincide. Don’t investigative journalists try to pinpoint the exact date and time when an event occurred? When confronted with two different crash dates, Leir even provided a wacko theory that there could have been two crashes. Not just one UFO sighting clouding people’s memories, but two crashes. Who is this guy?

Leir claims that the Brazilian military hid the bodies and all traces of the crashed spacecraft. Doctors even operated on an injured alien. A soldier, alternately named Marco Eli Cherese or Chereze supposedly died after touching an alien with his bare hand. All of this is covered in merely 150 pages. His interview subjects gave the vaguest answers and in spite of this lacking testimony, and a complete absence of any kind of space debris as physical evidence, Leir is convinced that he had conducted a thorough investigation. His own assessment of his investigative efforts produced this laughably conceited claim:

“It is my unwavering and undoubting belief that this text, being an investigation into the absolute truth of these events, is one of the most important documents of the modern world and should be held in the highest esteem.”

Oh please. You be the judge.