On Sunday I attended the third day of Ruisrock, a music festival in Turku. I got there by a special bus from the central city square. There were many buses constantly pulling up to take festival goers to the site. One never had to wait for a bus. It let us off only as far as the road would allow; then we had a long walk (maybe twenty minutes) to the Ruisrock site. I have never attended a music festival like this so I was a bit timid about what to expect. I like my luxuries–flush toilets and quiet zones away from crowds–so I paid a bit extra for my day pass that entitled me to bathroom facilities like home (and not port-a-potties), plus a buffet lunch in a separate VIP area. It sounds very Marie Antoinette but the extra money was worth it. The buffet was extravagant; I went up for seconds and was so happy with the high-quality food. Lots of salads, pasta, quinoa, roast potatoes and the leanest tenderest roast beef. I do not eat a lot of red meat but this beef was cooked so well it broke apart with the slightest touch. And there wasn’t a speck of fat on it.

Ruisrock had five stages with acts performing on all of them from around 1:30 to 11 p.m. Ultra Bra was on the Ranta stage (ranta means beach, as the stage was right on the water) and I ate lunch while the first act, Nikke Ankara, played. I came all the way from Canada to see Ultra Bra reunite, so I was determined not to be stuck in the back rows, so after my lunch I headed for the stage just before 3 p.m. Finnish rap trio the Teflon Brothers came out for a 45-minute set. I was in the second row from the front. I was impressed with how the acts took to the stage at the scheduled time. Not one act that I saw was even a minute late. The Teflon Brothers were fun to watch but rap is not my thing. No offence to the Teflon Brothers, but I was merely using them a place holder for the act I had come all this way to see.

Rapper and dancehall artist Sean Paul took the stage precisely at 4:45 and performed for an hour. I have to admit that I had no idea who he was, yet a Wikipedia search tells me that he has had four Billboard number one hits. The audience went mad for him, and I just played along and acted like I knew his music (without obviously singing along). Again, I used the poor man as a place holder to ensure a front-row spot for Ultra Bra. I had a strong feeling that those in the front row would not be interested in Ultra Bra. Those who occupied the front row for the Teflon Brothers and Sean Paul would probably leave the Ranta stage to see other acts elsewhere. I was right: the Sean Paul fans vacated the front row and I got a prime spot to the right of the stage, in front of where guitarist Joel Melasniemi and drummer Antti Lehtinen would be positioned. I was very excited about seeing them. A genuine dream come true for this Canadian fan to see all twelve members reunite, sixteen years after calling it quits. I discovered Ultra Bra too late to have seen them live in concert on earlier Finland visits. Now I will finally get that chance.

Stagehands dismantled Sean Paul’s set and wheeled out the big Ultra Bra set. For this concert they had a small string section plus a couple extra horns. I recognized someone testing equipment yet couldn’t place his name or where I might have seen him. Correspondence with Joel later that night after I returned to my hotel confirmed that it was indeed Scandinavian Music Group pedal steel guitarist Miikka Paatelainen. I thought it was him, but I couldn’t be 100% sure. I wouldn’t expect a musician to be acting as a roadie. Also, I hadn’t seen him in real life for thirteen years, so I wasn’t about to yell his name from the front row and perhaps embarrass myself among a growing sea of fans running to the stage. The audience broke into spontaneous singalongs of Ultra Bra songs for forty-five minutes before the show began. I have never had the chance to sing along to Ultra Bra. The only time I sing out loud to their songs is in the shower.

I didn’t talk to anyone in the audience, as I felt that no matter what I said would turn me into a curiosity. I sang along to the songs before the show, belting out the lyrics like a solid Finnish fan, but I didn’t want to appear as a foreign oddity. No one ever gave me the impression that they thought of me that way, but I felt more a part of the audience by “pretending to be Finnish” than by revealing that I was a foreigner in their midst.

At 6:45 music was piped in. I recognized it–it was Ultra Bra singing with the tape looped backwards–and I tried to remember where I had heard it. Ultra Bra have never released backwards tapes (like the Beatles in their song “Rain”) so I tried to recall where I had heard this backwards song before. Then I remembered: their video concert at Tampere-talo in 2001 started the same way. I hung out all day today with Antti, and I asked him what the song was. He said it was an early take of “Rubikin kuutio”. At the end of the tape the band took the stage. All twelve original members of Ultra Bra, and they started with “Heikko valo”. I often take notes during concerts, to track what songs are sung. I debated whether or not I wanted to do this. I also debated whether or not I should even take photographs. I really did not want anything to distract me from experiencing my first ever Ultra Bra concert. Nowadays people with cellphones take pictures or record all aspects of their lives. No one ever experiences their life by living in the moment. I wanted to do that with Ultra Bra. So I did not record their set list, but they performed so many songs that when I look at the tracks on their albums I can say that they performed nine out of the thirteen tracks off Kroketti (my favourite album). As I go through their albums I believe they performed twenty songs.

From memory, the songs are (they are listed in chronological order from their album track listings, not in the order that they performed them):

[Edit: my friend Mikko informed me that the set list was posted here. This seems correct. In their Seinäjoki show a week earlier, they also performed “Helsinki-Vantaa”, and the only reason I know this is that someone uploaded a clip on YouTube.]

Near the beginning of the concert Joel yelled my name, and Antti looked over at me bopping along. I had told them that I would be wearing a Toronto Maple Leafs shirt and that I would try to be in the front row on the right side of the stage where they were. Singer Arto Talme gave me the thumbs-up during the instrumental break in “Älä soita tänne enää koskaan”, where there is a short but prominent piano piece after the rapid hand claps. I imitated playing the piano–it was not audible during the live performance–so he must have realized that I knew that it was expected.

I sang along or lip-synched to every song, except the slowest numbers. Sometimes even fans have to take a break. Big surprise (but not for me as I knew already) was the appearance of Anna Tulusto during the encore. Anna left Ultra Bra to have a baby. She is very pregnant in the video for “Tyttöjen välisestä ystävyydestä”. The concert ended at 8:10 p.m., with Swedish singer Zara Larsson closing the Ranta stage with an hour-long set starting at 9:00. I did not take many photos but here are some. I took one short video of the band bowing as they left the stage after the encore and I posted it on YouTube. The band as they take the stage 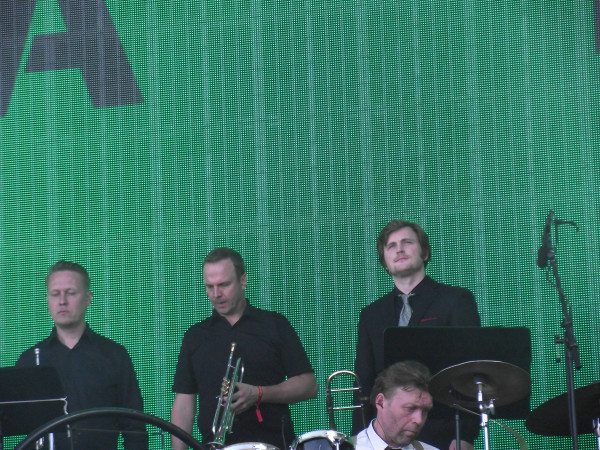 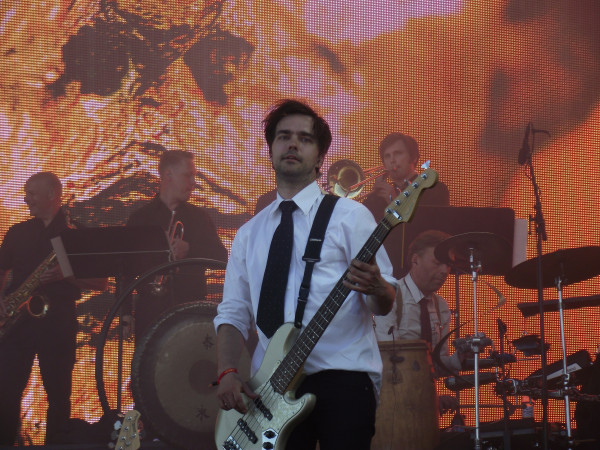 A great shot of Tommi. 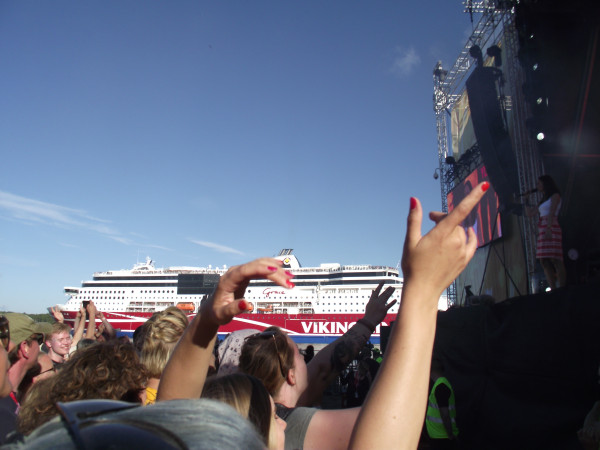 When the band performed “Vesireittejä”, it was exceptionally fitting that a ship should arrive from Stockholm. 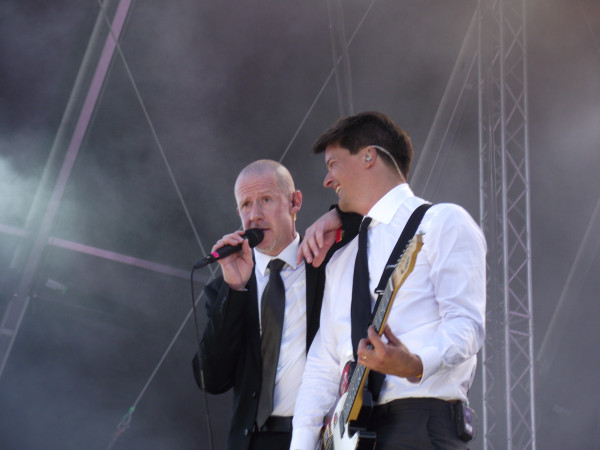 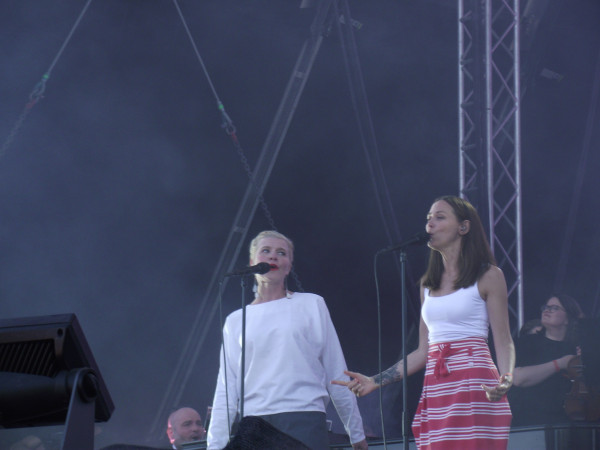 Kerkko Koskinen on piano, whom I consider a hero in Finnish music, Anna Tulusto, Terhi Quite simply, the best Finnish band ever