On Sunday 16 July I attended my second Ultra Bra concert at Ilosaarirock, a three-day music festival in Joensuu in eastern Finland. Unlike the show at Ruisrock in Turku a week before, Ultra Bra was headlining and in fact given the honour of closing the festival. Drummer Antti Lehtinen had told me weeks before the show that he would put my name on the guest list and I was instructed to go to the media tent outside the festival site. Antti has shown me such generosity during this trip: spending the day with me during and after his radio show and getting me VIP access to the concert. It was a thrill to see my name listed as a VIP guest of Ultra Bra. I wore the lanyard and the purple VIP wristband and walked to the entrance. The lineups waiting to get through the gates were long, and I lined up in one of them until I saw the special VIP entrance. I left the line and got through within seconds with a flash of the purple wristband.

Ultra Bra was performing on the main stage and the whole stage area was empty except for a few fans waiting at the very front. I walked right up and “camped out” for a prime spot. The first act I saw was Vesala, who is really Paula Vesala, former member of top Finnish group PMMP and Kerkko Koskinen Kollektivi. She came out to do her sound check shortly before her hour-long concert. The gaps between concerts was longer than in Turku: one hour and forty-five minutes between acts. I brought a book with me and read it after Vesala. The Pixies were up next. I overheard fans saying that this was the first time that the Pixies had played in Finland, and they were obviously excited about it. Many fans standing by me were wearing Pixies T-shirts (and not the ones that were on sale in the merchandise tent). The audience behind me got rowdy with their swarming pool of dancing, yet security was watching and it wasn’t too much of an encumbrance to be jostled around by some excited Pixies fans. They sure had waited long enough to see this band.

The Joensuu audience was much more into dressing the part for their favourite bands. I noticed that many fans wore Ultra Bra T-shirts (I don’t recall seeing any such T-shirts at Ruisrock) and I counted at least a dozen fans in yellow raincoats. Not that there was any threat of rain. Yellow raincoats are an Ultra Bra fashion statement, ever since they filmed their video for “Sinä lähdit pois” at Helsinki-Vantaa Airport. And they chose to wear these yellow raincoats when they announced their reunion tour: 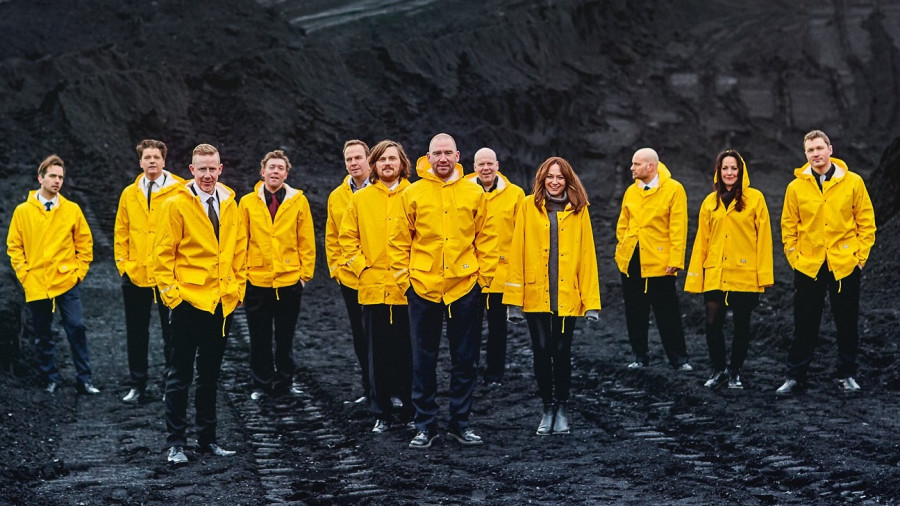 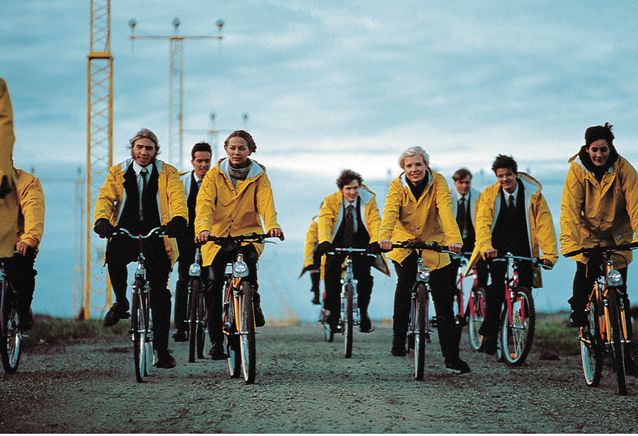 which is a scene from the “Sinä lähdit pois” video.

While the roadies were prepping the stage for Ultra Bra, percussionist Jan Pethman was the sole band member who set up and tested his own equipment. I made a remark about this–in English–to a fan standing to my right and that brought upon a conversation that lasted until the start of the show and then after. I never got the guy’s name, but he was from eastern Finland who was now working in Estonia. So we were two fans who had each come to Ilosaarirock from another country to see Ultra Bra.

Antti had told me that unlike in Turku, the Joensuu show would be without an orchestra. That would have an effect on some songs which have profound string segments, such as “Tyttöjen välisestä ystävyydestä”. I jumped in exhilaration as I heard the opening to “Jäätelöauto”, one of my favourite songs. As in Turku, the audience broke into a chorus of Ultra Bra songs as showtime neared. One of the songs we sang was “Jäätelöauto”. I am so happy that Ultra Bra performed this, which is among my top four favourite songs. (The other three are “Tyttöjen välisestä ystävyydestä”, “Rubikin kuutio” and “Älä soita tänne enää koskaan”.)

The group performed “Hei kuule Suomi” in both Seinäjoki and Turku, and I knew they had to play it in Joensuu, since they name-drop the city in the lyrics:

I anticipated that when the Joensuu lyric came up, the audience would erupt in cheers and applause, yet after the first line the singers turned their microphones to the audience and we, thousands of us, sang the Joensuu line.

The group performed “Kirjoituksia”, a treat for Joensuu as they did not perform this song at their two prior concerts. There were twenty-one songs in total, nineteen the same as in Turku, but unfortunately “Rubikin kuutio” was left out. I knew that today was singer Terhi Kokkonen’s 43rd birthday (it was only by chance that a Wikipedia search I conducted that afternoon informed me as such) and singer Arto Talme announced it from the stage, but the audience didn’t sing “Paljon onnea vaan” to her, although we had started to sing a limp version of it before the band broke into their next song.

I took fewer photos during this concert. When I looked at the pictures from Turku I realized that I didn’t have any at all of singer Olli Virtaperko, and very few of Kerkko Koskinen. I certainly made a point of taking a lot of pictures of both of these Ultra Bra members in Joensuu. Here are some more photos from the concerts: 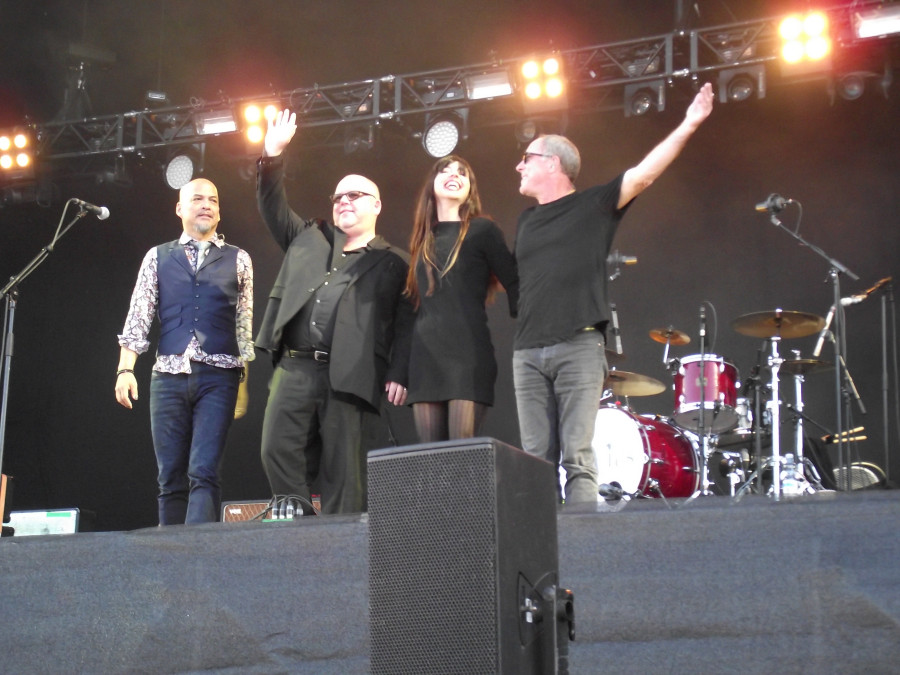 Kerkko flanked by Vuokko and Arto 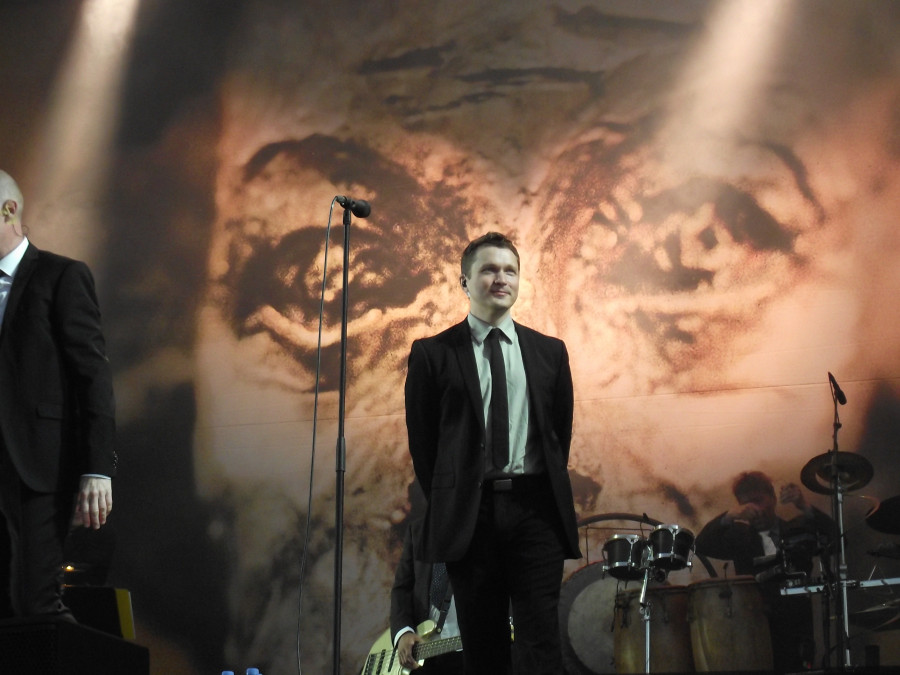 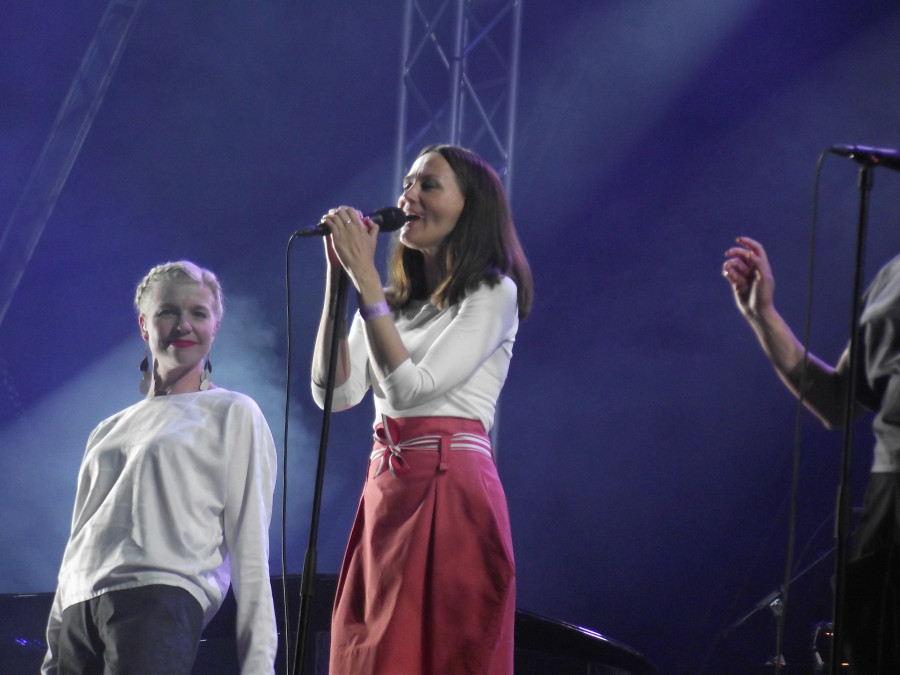 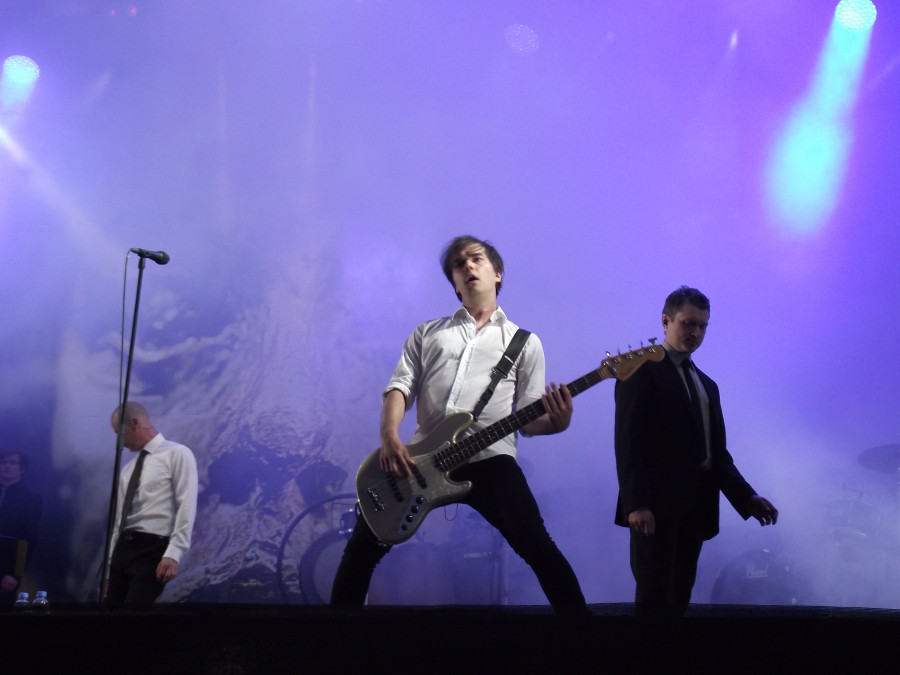 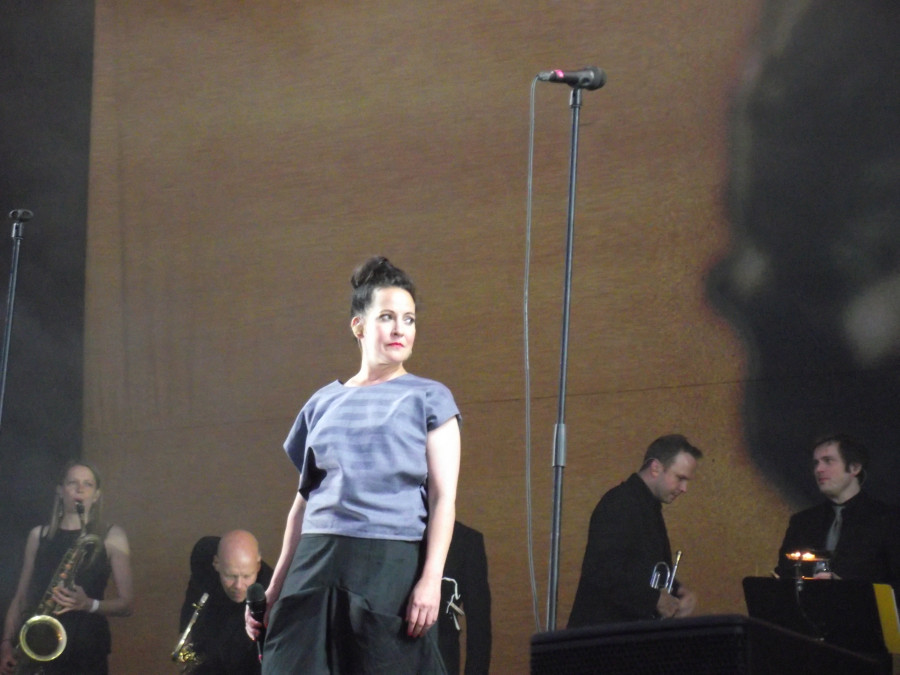 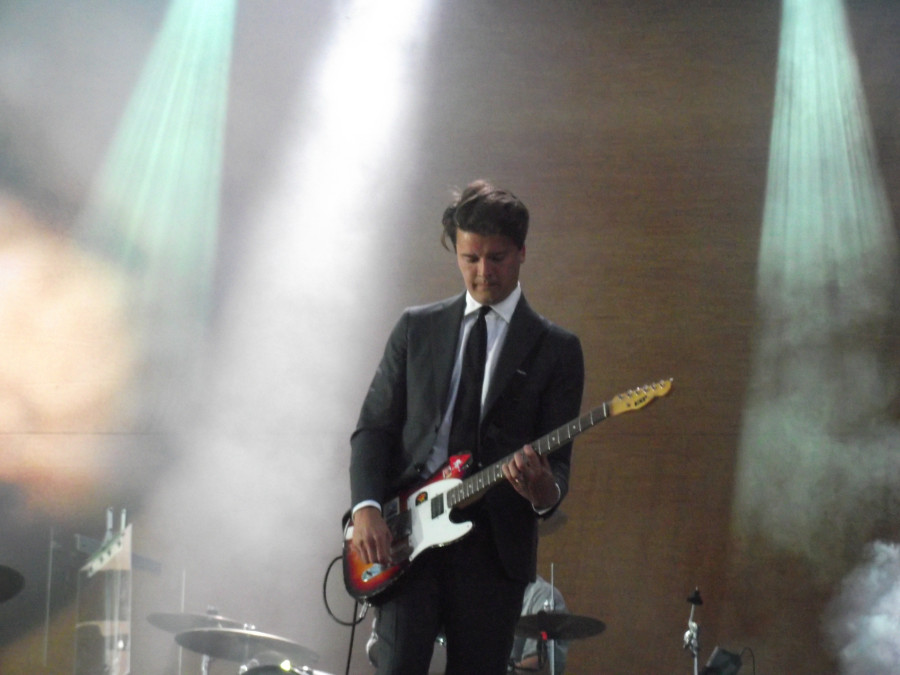 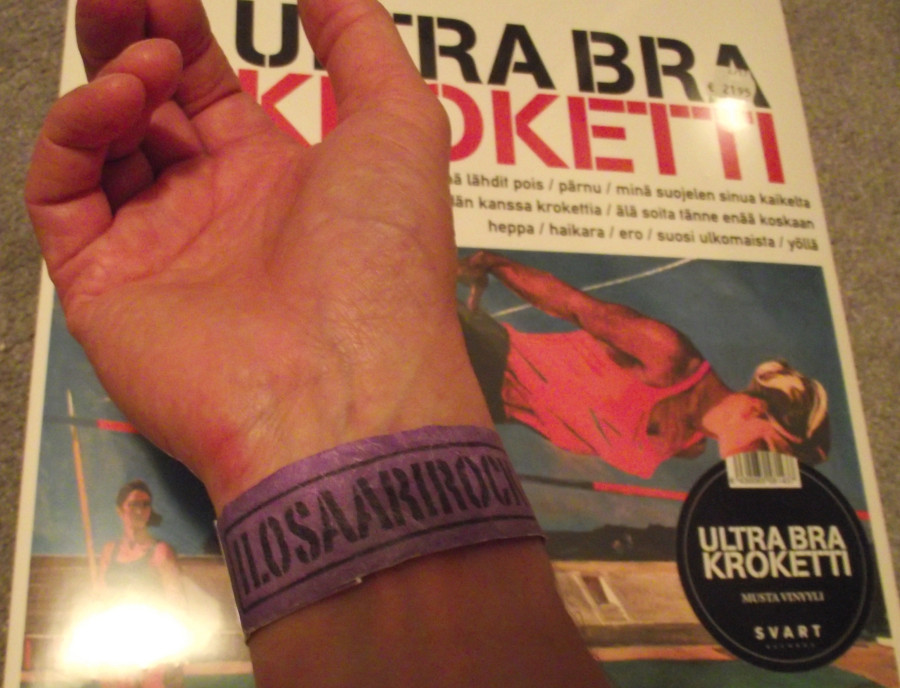 My VIP concert wristband, still on my wrist as of Tuesday evening