Umm…I may not be going to Tristan

I just found out that the departure date for the Edinburgh, already delayed three days as it is, has been pushed back till next Wednesday, September 20. This is not good news. While I can understand–genuinely–that the ship can be and often is delayed, I realize that I cannot go to the island if the delay is a week longer than expected. I had the foresight to schedule three “delay days” which would accommodate my flight schedule for going back home. But the Edinburgh has a floating fishing schedule. That is, if the ship is delayed a week, it will need an extra week to get all its fishing done. It does not stick to its original pick-me-up-from-Tristan date. I could still make it back home if the Edinburgh was delayed three days. Now that it has been delayed seven, things are not looking good that I will be able to make a round trip on the Edinburgh. I have to be home by October 18 because Mark and I are flying to Melbourne on that date. Yet even if our trip to Australia (and New Zealand) was not even an issue, I would still have to rebook my flight home. I would have had to pay a rebooking fee regardless.

But there is still hope. The Agulhas II research vessel (often referred to as just the Agulhas), which I travelled upon four years ago, has a fixed schedule. It is going to depart from Tristan on October 7, arriving back in Cape Town on October 12. Fortunately, there are two berths available going back. But there are two conditions: one, provided there are no medevacs needing to go to Cape Town, then there will still be room available; and two, the two berths are in a cabin shared by two women. I have asked the island’s head of tourism to ask these women if they wouldn’t mind sharing with a gay man–I mean, it might help them decide in my favour.

The plain truth in the matter is this: if I cannot get back to Cape Town on the Agulhas, then I am not going to Tristan. I will find out by next Wednesday. I will not stay in Cape Town or southern Africa until my original home departure date of October 15, and will rebook my flight home as soon as I know for sure if I am not going to the island.

This morning I moved from my hotel to Tristan da Cunha house, often called just Tristan House. It’s a large house owned by the Tristanian government for its citizens to stay in while in Cape Town: 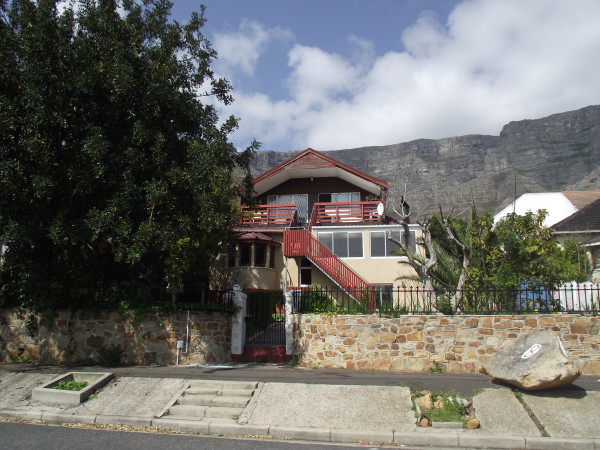 It used to say “Tristan d Cunha House” on the outside (the a in da had been painted over) but now the whole name has been covered.

I was able to stay here because I am booked on the Edinburgh going back and also because they have room available. My room is upstairs on the left. I was greeted by Iris Green, who is the postmistress on the island. She is in Cape Town recovering from foot surgery. She told me that there was a stack (she demonstrated how high) of mail waiting for me on the island. Thank-you all for sending me mail. I may now not get it until next year. I do not want it forwarded to me at home in Canada. If I don’t make it to the island this year, I will try for 2018.

Where Long Street becomes Kloof Street, you see the South African flag painted onto the side of a building: The current Google Map has a Standard Bank ad painted on the building. For some reason, Google Maps blurs out the lower half of the green sign. It says “Orange Street / Muizenberg”. And the blur to the right of the McDonald’s sign is now just a covered red rectangle.

Mark is a lover of architecture and thanks to his advice I visited the Mutual Building. This art deco structure was built in 1940. You will see more on the Wikipedia page than I was able to see in person, because scaffolding obscured the building on the outside from the ground floor up. I was only able to see a minute fraction of its famous friezes and none of its tribal figures. I went to the main entrance and took these photos: 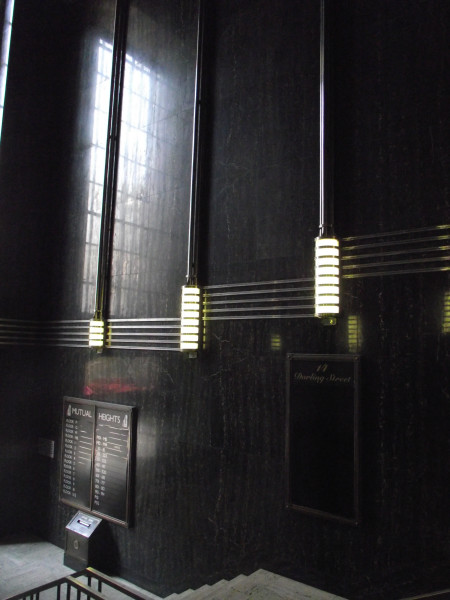 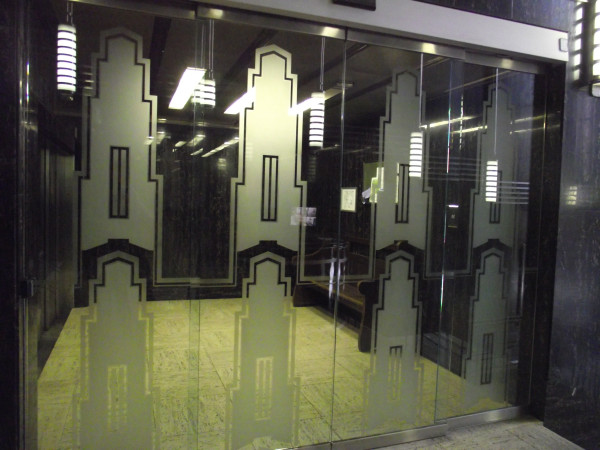