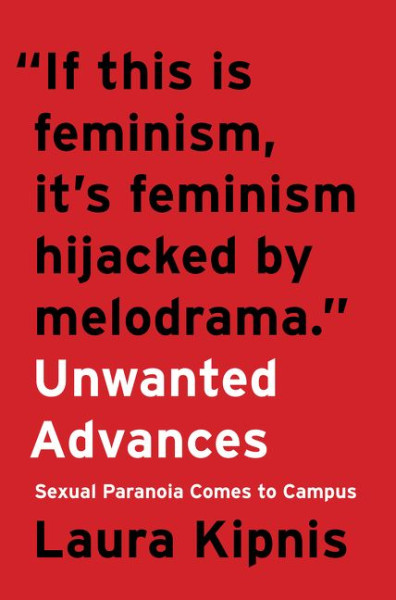 Unwanted Advances: Sexual Paranoia Comes to Campus by Laura Kipnis opens a minefield of politically incorrect talk about sexual behaviour and disciplinary actions on American college campuses. Kipnis, a professor at Northwestern University, wrote an essay about sexual paranoia on campus. The response to her piece incited protests and action was brought against her for creating a “hostile environment”. That was the last straw. Fearing that academic free speech was under threat even for tenured professors, Kipnis wrote Unwanted Advances. She covered other cases in addition to her own, breaking down each one to find the heart of the matter that drove the accuser(s) to take matters to authorities. Kipnis pulled no punches. Some might call her a muckraking anti-feminist. Others–like some of her colleagues–consider her heroic for writing what they had been afraid to. She has exposed an academic chill among the intelligentsia caused by campus sex policies which have returned feminism to the 1950’s.

Readers of my blog know that I am a staunch supporter of Camille Paglia, whom I consider the greatest feminist thinker of the past thirty years. I have four of her books, and am privileged in having seen her speak and met her. I share her belief that colleges and universities have no business policing the sexual activity of their adult students. The institutions that do so are weakening women by enforcing a women-as-victims ideology. This ideology regards the modern university woman as always a potential victim needing the vigilant and watchful care of her institution. Her sexual authority has been removed and replaced by mollycoddled paranoia. Current laws in place about sexual assault, harassment and rape apparently are not enough. We must go after any soupcon of innuendo as a possible catalyst for a lifetime of trauma. Kipnis instilled fear in all of us who work in such an institution where any behaviour, even perceived or misinterpreted behaviour may put one’s job at risk. The cases she profiled were exercises in hysteria where charges against professors seemed to increase in severity the deeper the authorities plunged into the quagmire. Enquiries resembled modern-day witch hunts, where accusations morphed into new charges and accusers felt compelled or even empowered to tell more when they realized their stories–all baseless, mind–were being believed. The more fingers that poked the pie, the worse the situation was for the defendant. In my opinion everyone Kipnis profiled was railroaded. Any institution that expressed doubts about the charges risked reprisals from the federal government, from other universities and from its own students that it wasn’t taking the charges seriously. It was believe everything or risk losing funding and future enrolments, and gaining a whole mess of bad press.

Paglia has been vilified for stating that if a college woman goes with a male student back to his room, especially at night after a party, she is giving consent to sex. At first I did not subscribe to this belief but Kipnis has convinced me otherwise. No woman goes to a man’s room under the belief that all they are going to do is sit on the edge of the bed and talk. “Come up to my room” is another way of saying “Let’s have sex”. Paglia and Kipnis aren’t blaming women who are raped, but they do shake their heads at those who willingly go with men totally unaware of what most certainly will be attempted. In many cases drunkenness involving both parties is involved and Kipnis addresses binge drinking on campuses. She finds it abhorrent that when two drunk people engage in sex after a party, it is always the men who are responsible for their own lucidity while women can absolve themselves of their sexual authority, and use campus regulations as their own version of the morning-after pill.

Kipnis states throughout the that feminism has regressed to the 1950’s when women can absolve all responsibility for even consenting to sex. One chapter title in particular sums it up nicely:

“Flip-Flopping on Consent: A “Yes” Becomes a “No” Years After the Fact”, where the author states:

“Sexual consent can now be retroactively withdrawn (with official sanction) years later, based on changing feelings or residual ambivalence, or new circumstances. Please note that this makes anyone who’s ever had sex a potential rapist.”

“So who can consent to sex? Not women obviously–how could we? Someone might be mentally manipulating us.
“There are indeed multiple asymmetries in relationships, from finances to attractiveness to gender to confidence. And if power differentials make consent impossible, then any person in a position of asymmetrical power (a male, a professor, a high earner) who has sex with a person with less power (a female, a student, a low earner), is effectively a rapist even if the less-empowered person has consented.
“You begin to see the degree to which consent is a moving target, and the direction in which it’s moving on campus is sentimentality about female helplessness.”

Yes–female helplessness. University authorities–especially in the US–are now every woman’s Big Mother figure welcoming her students to come crying to her. Universities are setting women back two generations, making them live in fear of innocuous remarks and nonexistent assaults. Kipnis did not grow up in universities founded on fear:

“In case I haven’t made it sufficiently clear, I absolutely believe there are sexual harassers on campus, and bona fide harassers should be fired. Then there’s bona fide sexual hysteria, the fantasy that predators are lurking around every corner. In fact, having been a little ironic about campus dangers turned me into one of these fantasy figures myself.”

“Women are situated differently from men when it comes to sexual danger (though, according to social science research, we typically also feel ourselves to be far more vulnerable to sexual danger than we are–and I can think of no better way to subjugate women than to convince us that assault is around every corner). Still, for my generation of women, there was hardly the same death knell tolling in the background.”

and finally, the best passage from the book:

“I find myself wondering when this version of besieged womanhood came back into fashion. I don’t want to sound cavalier about sexually gross professors, but I’ve heard my own mother describe once being chased around a desk, literally, by her astronomy professor, for whom she was working part time and who was trying to kiss her. This would have been the 1950s. Her hands were covered in mimeograph ink, and she left a mimeograph handprint on his forehead when she pushed him away, she recalls laughingly.
“Granted, my mother didn’t aspire to become an astronomer, so her expectations of the workplace were perhaps different from those of a woman hoping to enter her professor’s field. But she was in no way traumatized; in fact, she wasn’t even particularly outraged. ‘What ever happened to an old-fashioned pass?’ she exclaimed when I filled her in on the responses of today’s grad students to similar episodes. About the astronomy professor, she has surprisingly anodyne memories. ‘He was actually a nice person,’ she said when I asked if she’d been indignant. I gave her a dubious look. ‘No, really!’ she insisted. (Today’s campus statistics gatherers would count her as an ‘unacknowledged’ sexual assault victim.)
“Let’s all hope that male sexual stupidity soon finds a place of honor in the ashcan of history. Until that happy day arrives, it seems worth asking why a woman of the pre-feminist 1950s felt so much more agency than grad students of today, so much more able to see a professor’s idiocy as comic fodder, not an incapacitating trauma.”