Mount Paektu is the highest point on the Korean peninsula, at 2744 m. The peak is sacred to all Koreans for it is believed to be the ancestral homeland of the Korean people. Paektu imagery is seen throughout the DPRK, for example, at the Yonggwang subway station: 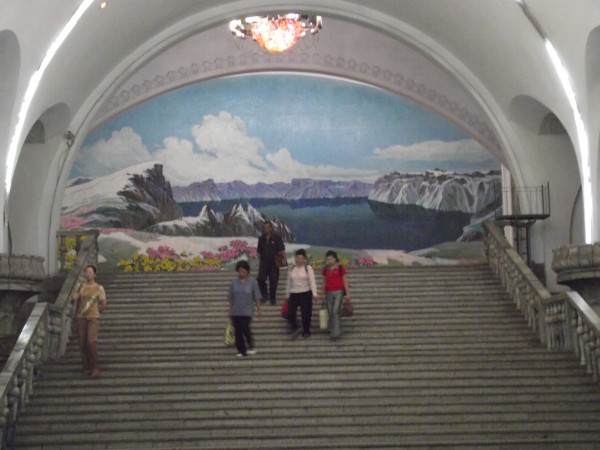 during the Mass Games: on my airline ticket: 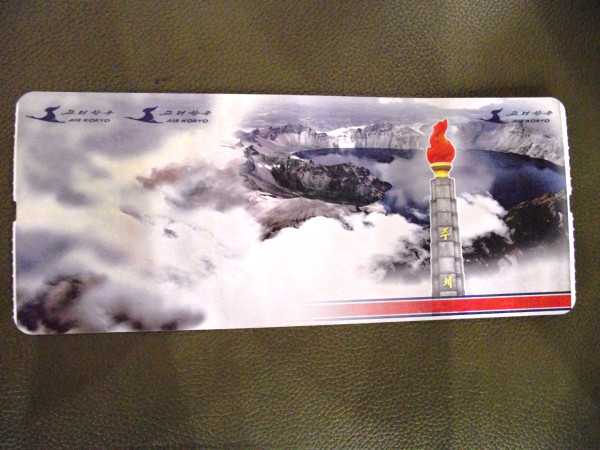 and with portraits of the Eternal President and Great Leader Marshal Kim Il Sung and the Dear Leader Comrade General Kim Jong Il standing atop the mountain with its crater Lake Chon in the background: 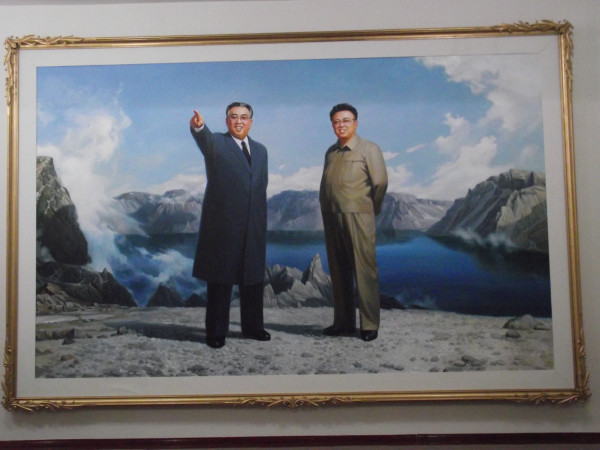 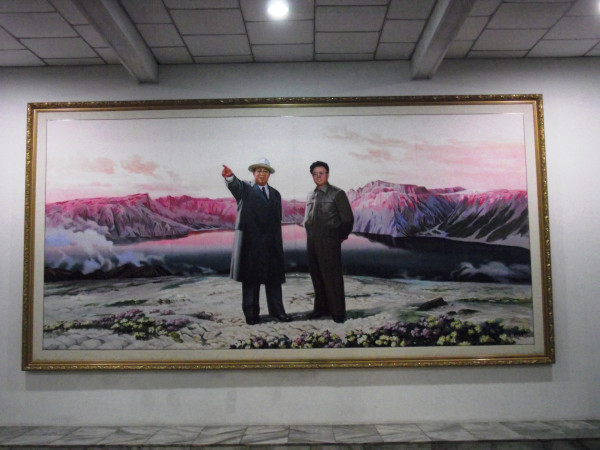 It is a pilgrimage for all Koreans to see Mount Paektu. North Koreans are permitted to travel there but South Koreans can only visit from the Chinese side north of the border. DPRK propaganda has rewritten the life story of the Dear Leader Comrade General Kim Jong Il, claiming in its official biography that he was born at his father’s secret camp at Mount Paektu, at the site of the headquarters of Kim Il Sung’s anti-Japanese guerrilla army. The mountain has been given the Kim Jong Il rechristening treatment, with a gaudy carving at the summit, visible from the base: The Korean text reads “Mount Paektu, the holy mountain of the Revolution” with the Dear Leader Comrade General’s signature underneath, along with the date of 16 February 1992 (his fiftieth birthday). I was shocked to see such a beautiful mountain defaced in the name of propaganda. Then one of the travellers in my group suggested Mount Rushmore was an even worse travesty against nature.

The buses parked at the base of the mountain and we got out, ready for the long climb. It was freezing cold, and we were prepared with extra layers of clothing. Yesterday’s news (always a pleasure to watch the propaganda parade of the North Korean evening newscast) gave the temperature at 0°C to −1°C. I wore a T-shirt during the bus ride but put on a long-sleeve shirt and a light jacket when I got outside.

It was an hour climb. For a site of such national importance, bordering on the holiest, blessed by the living divinity of the Dear Leader, I found it almost criminal that there were no washrooms at the summit. I had to go (but not badly) yet some Korean men couldn’t wait, and relieved themselves against the wall of the out-of-service cable car terminus. I would have felt that to commit such an act would be tantamount to ripping up a portrait of the Dear Leader.

The crater Lake Chon lies at the summit of Mount Paektu. We were given an hour to explore and although there was an additional hike of one kilometre to a different observation site, I decided to rest and reflect and admire the beauty of the scene. I took many photos, including panoramas which were rather difficult since the clouds were always changing. 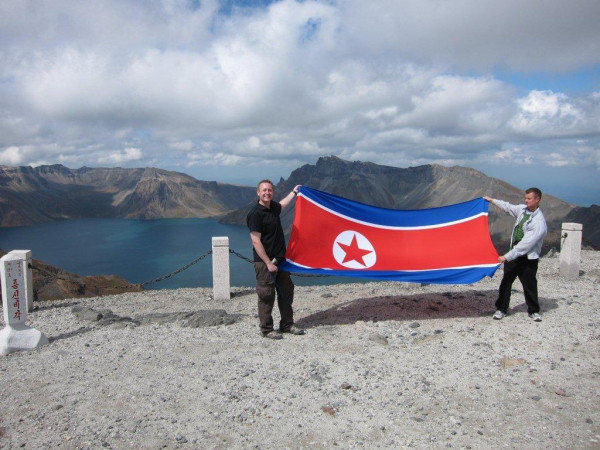