War Below Zero: The Battle for Greenland 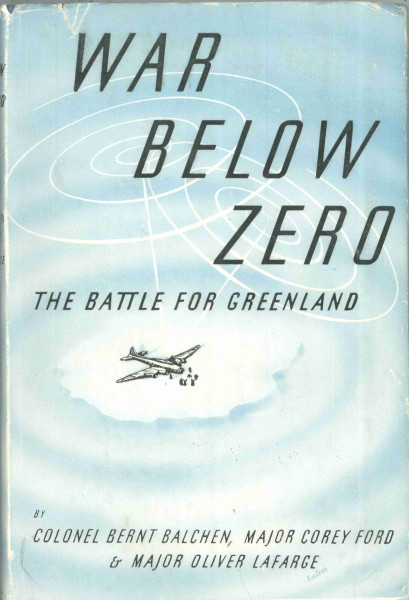 While travelling from Tristan da Cunha to Cape Town I read War Below Zero: The Battle for Greenland by Colonel Bernt Balchen, Major Corey Ford and Major Oliver La Farge. As with my previous book, Isle of St. Helena, I bought this book at Clarke’s Bookshop in Cape Town before departing for Tristan.

War Below Zero was published in 1945 and tells four different stories about the northernmost battle zone in World War II. Since this theatre was so remote and the cast so small, people often appear in more than just one story. I was not aware that Greenland was even involved in WWII so I was more than casually interested in reading about this part of the island’s history.

The first part dealt with the secret mission led by Col. Balchen to establish an American air base in Greenland. While flying over the island his team discovered that the Germans had already built a weather station which was in daily communication with Berlin. Balchen’s team destroyed the station and took one man prisoner.

The longest story dealt with the rescue missions to save nine men whose Flying Fortress en route to England crashed on Greenland. La Farge compiled the pilots’ and rescuers’ testimonies into a cohesive narrative full of suspense and detail. The weather conditions were so treacherous that rescue was never easy, yet the men never gave up hope since communication via radio and airdrops of food and supplies came often. Keeping out the cold was a life-or-death matter and frostbite threatened hands and feet. No one died in the crash however over the course of 129 days, the length of time it took to eventually rescue the last of them, five men died in the rescue attempts. Aside from the cold and winds, the men had to beware of crevasses that threatened to swallow anyone whole without warning. The most chilling account in the book was reading about Lt. Harry E. Spencer’s rescue after his fall down a crevasse. In spite of the peril he was in, Spencer, who had found himself wedged upon an icy ridge, was not injured or in a state of panic:

“To his own surprise, what impressed him most then was the extraordinary beauty of his position. The sun was just rising. Above him the blue ice walls reached up a hundred feet, then at the top the level sunlight struck the lip of the crevasse, and he could see a sparkling blue sky and sunlit clouds. He said later that he knew he would get out, and it was the beauty that struck him, although he knew that sounded funny.”

It was this sense of general optimism that kept these men alive in the most brutal Arctic conditions. Spencer was rescued by a rope of parachute lines with a harness rigged at the end of it for him to fit into. It’s amazing that there was enough room within the crevasse to manoeuvre himself into it.

Other men, though, weren’t as lucky. The rescue attempts told of many near misses, partial falls and one death down these gaping chasms of ice. Cpt. Kenneth H. Turner, one of the rescue squad, summed up the feeling of lying over a crevasse and feeling helpless:

“It seemed queer to be so near those men that you could nearly touch them, and yet you couldn’t do anything about getting them out.”

Two short stories end the book. The first is a travel diary of P-38 pilot Lt. Harry L. Smith’s flight across the north Atlantic via Greenland. He uses military slang, full of feminine personifications and nicknames. The Germans on the island had misdirected the six planes in Smith’s team using their secret code, forcing a mass crash landing on the ice cap.

The final story was a light-hearted account of life on an isolated weather station. Crowded conditions and monotony might drive other men mad, but the eleven who lived there managed to pull through with good spirits.

At the end of the book is a generous section of black-and-white photos showing the Greenland landscape and what military life was like on the island.