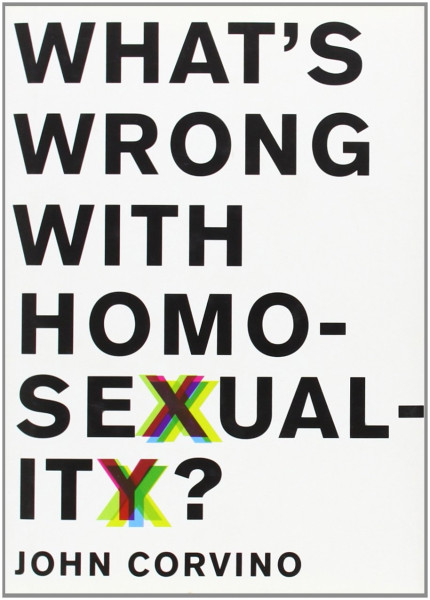 What’s Wrong With Homosexuality? by John Corvino is a compilation of seven essays the author has written to debate this point. Corvino has debated his side at over two hundred universities, facing off against those whose aim is to win the argument that there is something somehow wrong with homosexuality. I enjoyed this collection, wherein Corvino named the chapters after the various arguments he has had to face. Chapter titles such as “It’s Not Natural”, “A Risky Lifestyle” and “Born This Way” are familiar to gays and lesbians and their advocates. I tend not to read books such as this, although the brevity (170 pages) and chapter titles drew my attention.

With a book this short, covering seven different arguments, there was no time to delay. Corvino got to the crux of each matter immediately and stated the dirty reasons why homophobes seem to get their knickers in a twist. In the chapter entitled “God Said It, I Believe It, That Settles it”:

“My point is this: If you adopt a simplistic ‘God said it’ approach to the [Biblical] text, then be prepared to swallow some pretty nasty conclusions about slavery, women, and so on. If, instead, you insist on sensitivity to historical and cultural context, then the homosexuality passages must be reexamined in that light. Loving, mutual, nonidolatrous same-sex unions are simply not on the Biblical authors’ radar, much less the target of these texts.”

It always amazes me that homophobes who spout Biblical passages against gays are usually ignorant of the passages the Bible says about their own lives. Selective prejudice, where one picks verses that supposedly condemn gays while ignoring other verses that affect the bigots themselves (if the bigots are even aware of other Biblical verses) always applies to others and never to oneself:

“The fact that many people approvingly cite natural law theory to condemn homosexuality while ignoring its other conclusions says a great deal about people’s capacity to tolerate inconsistency in the service of prejudice. Like Aquinas, the NNL [New Natural Law] theorists label masturbation, contraception, and non-coital heterosexual sex unnatural for the very same reasons that they label homosexual sex unnatural: the failure to achieve a reproductive-type union. They even condemn non-coital sex for heterosexuals unable to achieve coitus (say, because of injury). I suppose one can give them credit for consistency even while blanching at their coldness.
“For the rest of us, it often seems that an act is unnatural when the person making the claim finds it abhorrent or revolting.”

In the chapter entitled “Man on Man, Man on Dog, or Whatever the Case May Be”, Corvino writes about the unfortunate tendency of others opposed to homosexuality to lump polygamy, incest and bestiality all in the same group. He addresses what he calls the PIB argument, and states right upfront: why are they even connected? What could possibly be the connection that links my consensual relationship with my long-term boyfriend Mark with the most disgusting sexual practices listed above? The answer is that homophobes find our sexual relations “yucky”, and everything else they consider yucky gets lumped in with it.

Even if there was a connection between homosexuality and polygamy, it seems highly unlikely that the religious fundamentalists (for it is usually splinter sects who are the most prominent in the practice of polygamy) would even want to be associated with the gay movement.

“I conclude that the best response to the logical version of the PIB argument remains the simple one we started with: What does one thing have to do with the other?“

One reason that is sometimes given to deny gay marriage is “if we allow same-sex couples to marry, gay males’ sexual infidelity will bleed into the general population”. I cannot see how these can be connected. Will straight married men suddenly decide to cheat on their wives when they see gay men cheat on their husbands? Do straight married people need married gays to give them licence to cheat? Straights need no further encouragement to be unfaithful. I have always liked the saying that if you want to preserve heterosexual marriage, then don’t ban gay marriage: ban heterosexual divorce:

“Divorce is another analogy worth mentioning at least briefly. According to the Bible, Jesus himself said that ‘Whoever divorces his wife and marries another commits adultery against her; and if she divorces her husband and marries another, she commits adultery’ (Mark 10:11-12). Adultery is a violation of the Ten Commandments, punishable by death in the Old Testament. Yet fundamentalists take a rather different attitude toward, say, the thrice married Newt Gingrich or the four-times married Rush Limbaugh than they do towards gays and lesbians–even though all of the above are unrepentant sinners according to traditional interpretations. (It’s not enough to simply ‘regret’ the divorce: the Bible makes it clear that continuing with your current spouse makes you a persistent adulterer.) What this disparity suggests is that people are willing to subject the gay and lesbian minority to a rather different standard of Biblical literalism than they themselves would tolerate.”

What’s Wrong With Homosexuality? might not be read by those who believe the answer to the title’s question is “Everything!”, but it will provide those who are affected most by bigots’ venom with succinct answers with Biblical, logical and ethical backing.