Words on the Move: Why English Won’t–and Can’t–Sit Still (Like, Literally) 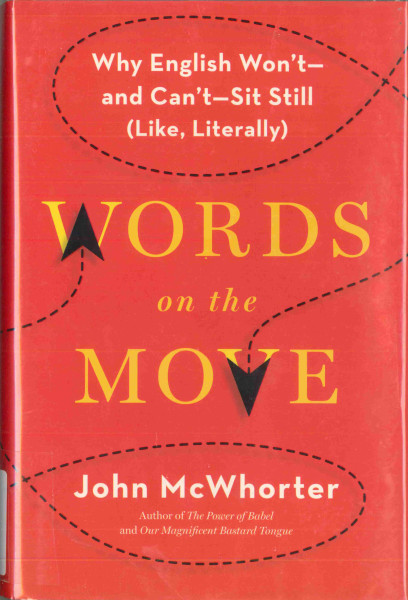 Words on the Move: Why English Won’t–and Can’t–Sit Still (Like, Literally) by John McWhorter is about the fluid state of the English language, and how it has never stayed still, despite protestations that the language is morphing into unintelligible nonsense. English has always been on the move, as the language centuries ago spoken and written by Chaucer is not the same as the language of Shakespeare. McWhorter presented informative and lengthy chapters on the various ways English has changed, from word meanings, word formation and pronunciation. I enjoyed most the chapter on the Great Vowel Shift. The author tried to make this subject matter light-hearted, and inserted personal, pop culture and “Simpsons” references, and as I have never seen the animated series, all such references went over my head. I do hate it when writers assume their readers know who those quirky cartoon characters are. McWhorter inserted his own personal jabs of humour but I was more annoyed by them. I dislike parenthetical or italicized cutesiness as an author tries to make a supposedly dry topic as linguistics palpable for the masses.

I liked that McWhorter traced the history behind some words and expressions, to explain how they came to be what we write and say today. For example, the expression used to:

“There are things we say all day long every day that are deeply weird like that, and one that often occurs to me is the vastly peculiar used to, so seldom singled out and yet certainly one of the oddest things in the English language if taken literally. If a sentence is merely a matter of words, then how about She used to live in Columbus? We all know use as a word, but in what sense is it contributing its meaning in She used to live in Columbus? She wasn’t using anything, or at least that isn’t what the sentence means.
“Even the way we say used to gives away that more is going on than our simply saying the word use. Imagine someone pronouncing the used to in that sentence as ‘yuzed to,’ the way we would pronounce used in She used a pen. But no–to say ‘She yuuuzed to live in Columbus’ would sound distinctly oleaginous; no one would even venture it.”

He goes on to write about its original meaning and its evolution and pronunciation to what it signifies today.

I had little to disagree about in this book, with one exception. One relatively new phenomenon in writing is that of the use of emoticons. Whether in texts or E-mails, emoticons now occupy a part of written, or graphic, communication that was missing from texting language. I have always maintained that written communication, and by that I mean the language of E-mails, that if written well and descriptive enough, should not need the use of emoticons. It therefore takes an artful communicator to convey the sense of a smiley by written text alone. A sign of a good writer is the ability to elicit a smile within his text and not to rely on the crutch of a smiley graphic or a colon followed by a right parenthesis to do the work for him.

However, since texts are usually brief and written on-the-spot, I can see the need for emoticons. No one wants to ponder how to imaginatively compose one’s text when a simple graphic will do the trick. Keep in mind that I am not a text writer and have never sent a text message in my life. I am far more formal in E-mails than anyone needs to be, as I abbreviate nothing and spell numbers out in full.

McWhorter raised an insightful remark about discrimination in the twenty-first century:

“…[R]age over language usage may be the last permissible open classism, channeling a tribalist impulse roiling ever underneath.
“The tribalist impulse has ever fewer officialized outlets in our society, in which open discrimination is increasingly barred from the public forum. The very pointedness of the rage behind so many comments about language usage suggests something exploding after a considerable buildup of pressure, denied regular venting. In this grand and tragic world of ours, it is rather unexpected, in itself, that anyone would experience anger in response to the construction of a sentence.”

Criticism about others’ use of the English language can be seen as a form of cloaked racism, yet viewed as entirely legitimate in the eyes of those making such statements. If one has a printed text to refer to, one can use it to wave in the faces of those who allegedly violate language rules. Yet McWhorter states that while the language in printed form helped to standardize it which led to greater literacy, it nonetheless froze the natural evolution of the language, or at least slowed it down:

“By the eighteenth century, it was standard to feel that one was supposed to speak not simply in the way that felt natural, but in a certain way that was enshrined on paper. The page held the language back from rolling along as heartily as it had in earlier times.”

The author discussed plenty of “hearty” evolutions of meanings and gave examples from his own students. One such example, which I snobbishly find deplorable, is the evolution from based on to based off of:

“Based off of is just one more symptom of the fact that the language a people speak is properly the stage a language is in as they are speaking it.”

“If a significant proportion of the people speaking a language are using a word in a way that dictionaries tend not to mention, it means that the word is moving–as we would expect, since words always do.”

Undeniably this is true. Look how meanings, spellings and grammar have changed within even one generation…or even a few years. I went from spelling web site to website within a couple years and have read many novels published less than a century ago that spell to-day and to-morrow. I fear that in twenty years it will be standard to write “between you and I” but what can I do about it except moan whenever I hear or read it?