After the Fort Wayne Nationals Mark and I drove through Ohio, Pennsylvania and New York on the way home. We stayed overnight in Cincinnati, Columbus (OH) and Erie (PA). After we left Cincinnati Mark dropped me off in Xenia while he explored nearby Dayton. I was on a mission to see the town of Helen Hooven Santmyer, who became an unlikely sensation at the age of 88 in 1984 after her mammoth novel “…And Ladies of the Club” became a bestseller. I read this novel in 2010 and liked it so much I read the rest of Santmyer’s oeuvre immediately after. Thus the first five books I read in 2010 were all Santmyers. Her sole work of nonfiction was Ohio Town from 1962, her portrait of Xenia.

Before I left for Fort Wayne I had written to the head librarian of the Xenia Community Library and the staff of the Greene County Ohio Historical Society. There were four places I wanted to see, and since Xenia is small (having a population of only 25000) the mental map I had drawn was not going to take me long to travel. I wanted to see the library and historical society (around the corner from one another) and Santmyer’s house and grave. The staff at the library wrote that there was a pamphlet which mapped some of the sites featured in or were inspirations for “…And Ladies of the Club”. They’d make a copy of it for me.

I started off at the historical society, and saw a large display case showing photos of Santmyer, awards, plaques and dedications. Even the bottom shelf of the display case had things on it, and in order to read any of the letters or plaques I had to get on all fours and crawl around the floor. A lovely large photo of Santmyer was on display. I got the pamphlet “Helen Hooven Santmyer’s Xenia” as well as a colour photocopy of her grave site. I even looked through the old Xenia city directories, and found Santmyer’s name and address. Near the end of her life she moved into a nursing home and her address changed. 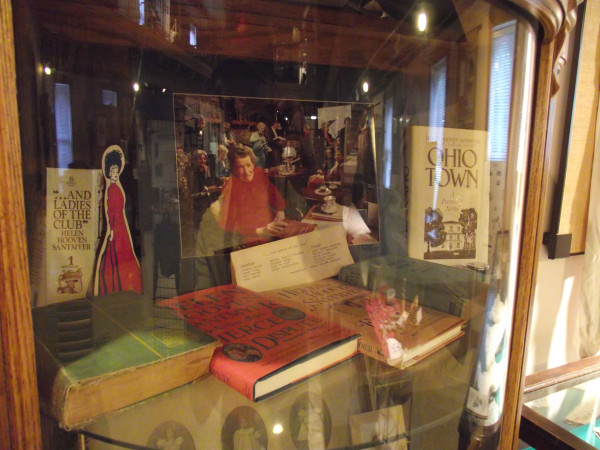 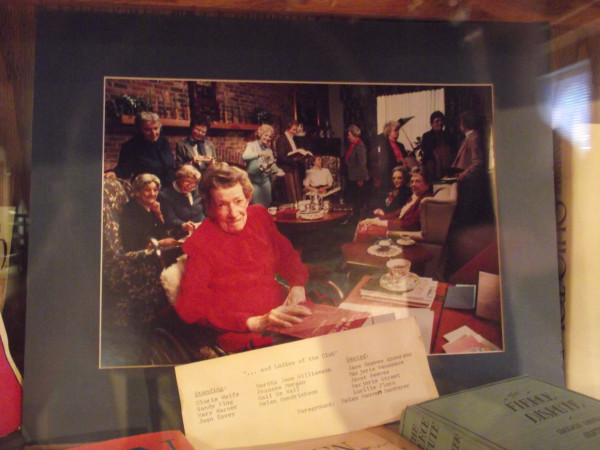 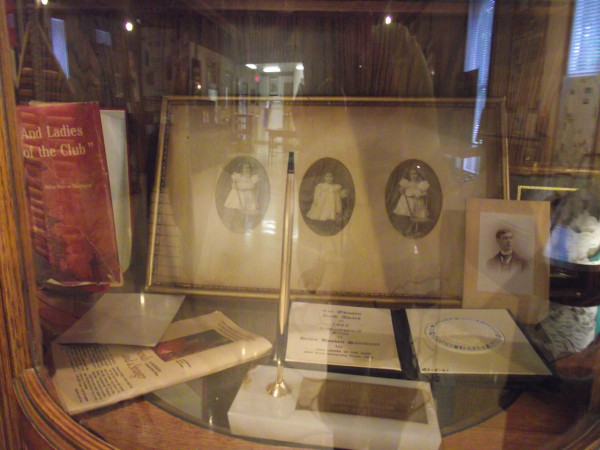 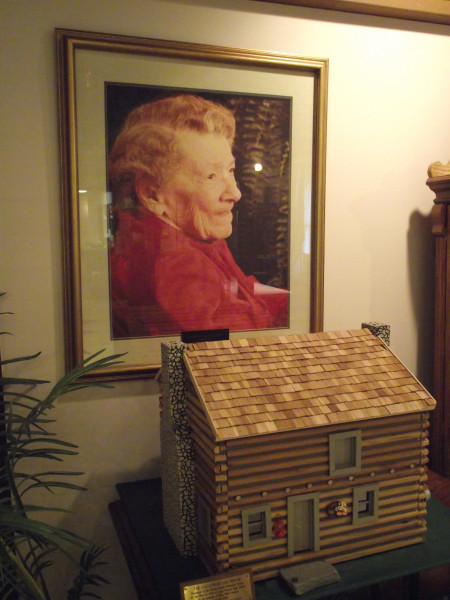 My next stop was the Xenia Community Library. I was directed to the Greene County Room upstairs where the staff had already made a super-large photocopy of the pamphlet for me. I would use the photocopy since by now it was raining and I was just in a shirt and shorts. I could spare the photocopy getting soaked to shreds. Fortunately I managed to keep the pamphlets dry. In my correspondence with the library before my arrival, I was informed that they had a Santmyer archive of folder files. One of the staff brought all of them out. Although I was eager to start my “Santmyer walk” I could not pass up the rare opportunity to look through every one of these folders, which contained newspaper stories, clippings from the local press, magazine articles, book reviews, her obituary from various media and, most interesting of all–her fan letters. Some were even the original letters and not photocopies. I was touched that many of them were written by men. I had to tear myself away and I started my walk at 5 p.m. En route to her house I stopped in at Blue Jacket Books. I learned about this place while still at home when I was looking on-line for Xenia bookstores. I usually walk around second-hand shops exploring the stacks by myself but time was of the essence and I could not afford to spend hours there (which I easily could). I just asked the owner if he had any Santmyers and he showed me the Ohioana section. He seemed rather proud of a green paperback edition of “…And Ladies of the Club”, although I had seen at least three of them in different colours when I used to go through the library donations once a week. Since I was in Xenia and he had a Book Club edition of Ohio Town for sale for the low price of seven dollars, I decided to get it. It would be a nice memory to have bought a book about Xenia while in Xenia: Santmyer’s house was just around the corner at 113 W. Third Street and there is a plaque out front: 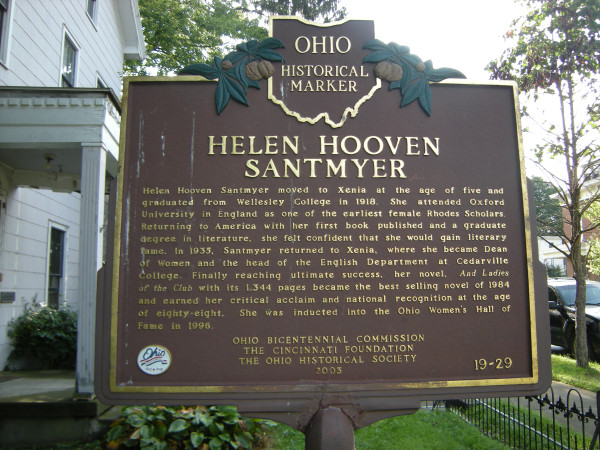 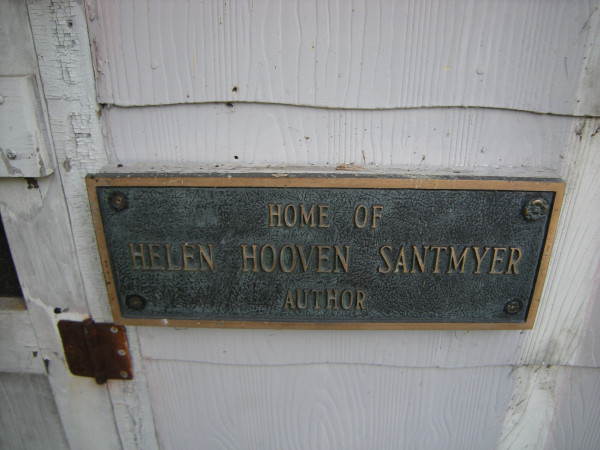 From there I walked to the Hivling Home at 235 E. Second Street. This house served as the inspiration for one of the homes where the Ladies of the Club had their book meetings: 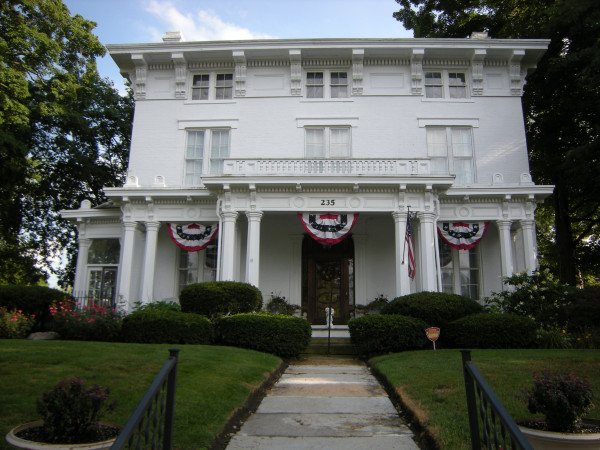 I met Mark back at the library and we drove to Woodland Cemetery. He dropped me off while I searched for her grave site. I only had a photocopy to go on but I found the Hooven and Santmyer plot shortly after I walked to the end of the cemetery path and turned right: 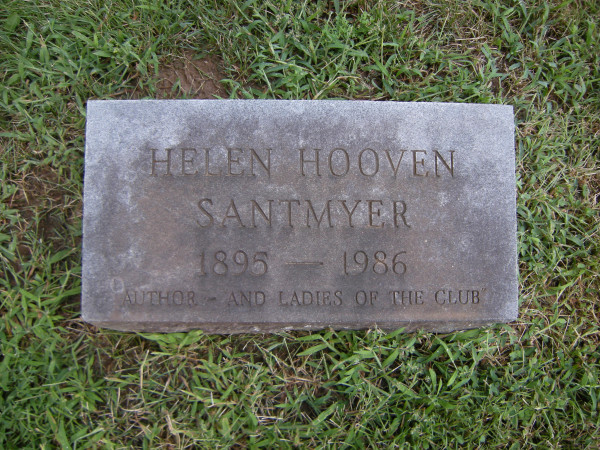