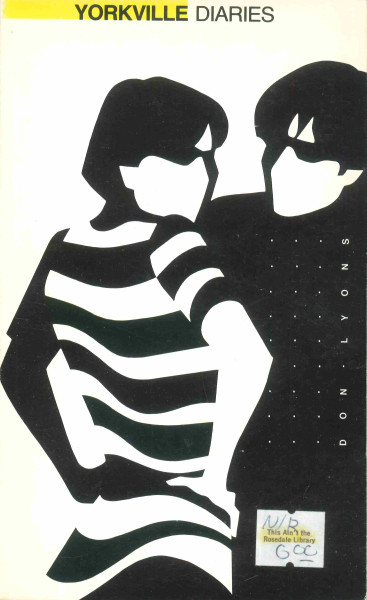 I bought Yorkville Diaries by Don Lyons over thirty years ago at This Ain’t the Rosedale Library, when it used to be located on Queen Street East in Toronto. Although the store had affixed a price sticker for $6.00 to the front cover, there was a tiny sticker on the top right of the first page with 5.95 typed on it. It was obvious that a non-electric typewriter was used to type the price. I wonder if Lyons himself did this (and then I have to wonder, how many times he did it). Yorkville Diaries was published in October 1984 and I bought it either then or in early 1985, yet I am convinced I bought it in late 1984 since I recall seeing a Yorkville Diaries book display in the store, and bookstores usually set up book displays to showcase new arrivals. Had the Internet been around in 1984 there would have been author biographies, interviews and plenty of reviews of Yorkville Diaries. In 2016 I can find hardly anything, except a few web hits that declare this novel to be a valuable collector’s item. I would love to read what critics and fellow readers felt about this novel, so I will have to do some digging around my library’s microfilm collection. It has taken me close to thirty-two years to read Yorkville Diaries, and while the teenage beatnik who bought it is now in his fifties, I am still a fan of beat culture and the coffeehouse scene in Toronto in the late sixties. Had I been eighteen years old in 1965-1969 (the years that this faux diary spans) I wonder if I might have hung out at the Penny Farthing, soaking myself in coffee. And then I wonder if I would have tried marijuana and hash and speed, just like diarist Leo and his friends.

Leo lives in Etobicoke yet goes to downtown Toronto to have fun. Over the course of four years he moves to Yorkville and flits from house to house, taking his growing gang of friends with him. What I loved most of all about Yorkville Diaries is that the passages flowed like genuine diary entries. I should know: I kept a daily diary for seventeen years and as I matured, my own writing style became more of a stylized oral discourse for an anonymous reader base. Lyons wrote lengthy entries yet the solid blocks of text flowed like a speedy script. The rapid pace meant that I could not put this book down. It captivated the sixties Toronto scene without resorting to clichéd imagery; I believe that Lyons himself could have lived a life similar to Leo. The diary format has to make me wonder if this novel was autobiographical. I am sure there was a bit of Al Capone thrown in too, as Leo and his gang of friends got caught up in some pretty shady behaviour, with guns and knives and plenty of fights. So much for the peaceful summer of love when you’re worrying about saving yourself from the greasers who always know how to ruin a longhair’s day.

Leo is a bit of a Yorkville Holden Caulfield. In a June 1966 diary entry, he writes:

“I was most unpopular at school today. This is because some fraternity boys came down to 48 [Bedford Road] last night and I wouldn’t let them in. Bill Spider brought them down. He used to be a sort of buddy of mine. He must be suffering from temporary insanity because he is scumming for this fraternity. Scumming gets me hot. Not only is it incredibly Mickey Mouse plus overflowing in sadistic homo perversion but it is also anti-human. I mean someone wants to join your group so you treat him worse than a dog that has bitten you. The whole thing makes me want to puke.”

Rapid stream-of-thought dialogue like this is effective because the reader is never caught up in questions or puzzlement. The reader could easily be sitting across from Leo listening to him rant. Leo’s entries are immediate and genuine, whereas diary entries that were disingenuous would make the reader doubt them, and give pause, ruining the flow of Leo’s consciousness.

Leo preferred to gaze at people’s reflections instead of looking at them directly. He would enjoy sneaking long gazes at their reflections because he believed that perspective offered an insight into people’s genuine selves (as long as they didn’t realize they were being watched). So the irony is that while he was seeing authentic portraits, they were all in reverse.

I had to laugh at the next passage, when waiter Leo is serving an American family in town to attend the Canadian National Exhibition:

“‘We’re up for the fair.’ (I swear that 9 out of 10 Americans call our stupid Exhibition ‘the fair’ which doesn’t change the fact that it’s the pits).”

When I saw Debbie Reynolds perform at the CNE Bandshell in 2010, she did indeed refer to how happy she was to be at our “fair” and how much fun she was having at “the fair”.

One cannot expect a teenage diarist from the 1960’s to care one iota for political correctness, and terms that are taboo today were acceptable in 1969. There is a lot of sexual violence in Yorkville Diaries, especially gang rape which goes by another vulgar name. Assault of students by teachers is also written about, and Leo isn’t talking about rapping of the knuckles. One realizes why Leo rarely spends any time in school. A teen who doesn’t go to school might be prone to spelling errors and poor grammar; fortunately the merciless editor in me knows when to withhold his blue pencil. Leo, for example, always misspelled Ukranian (when describing local immigrant communities).

I laughed aloud at the next entry from May 1969. Leo and his friends sure had a lot of fun pulling pranks in downtown Toronto. Here is one such episode:

“This afternoon I was poking around Simpsons looking for a pair of shoes when I crashed into Nadia and her new pal Nancy. They were pushing an empty wheelchair. Nadia said to hop in and I did. Might as well travel in style. And Simpsons’ wheelchairs sure are style. They’re big and old and wooden and the chair back is maybe four feet high. There’s wide, polished oak sidearms for you to rest your elbows. I sat back looking invalid while Nadia told everybody in hearing how I was weak with food poisoning and ready to throw up any second. Sure got the shoppers out of the way fast. After ten minutes of watch out, here he comes looks, I gave up the chair to Nancy. Right away she and Nadia went into this act where Nancy performs retarded; slurred voice, rolling her head, spastic hand gestures and everything. And the whole time Nadia’s yelling: ‘I hate you, Nancy! Why aren’t you normal? You’re a nuisance! I have to take you everywhere with me.’
“Very uncool Nadia. People were staring hard at us, some muttering under their breath. Of course the whole time Nancy was yelling in retard voices: ‘Nay-ay-dee-ah! Nay-ay-dee-ah! Nay-ay-dee-ah!’
“The crowd was ready to lynch us.”

Lyons wrote about real Toronto locations and gave authentic addresses. Sadly, hardly anything from the Toronto of fifty years ago survives today, although I have my own memories of the CBC studios on Jarvis Street and the record stores on Yonge. Leo’s rooming house on 305-307 Mutual Street still survives.

Yorkville Diaries ends shortly after September 13, 1969, the date of the Toronto Rock ‘N’ Roll Revival concerts at Varsity Stadium. As a Beatles fan I am well aware that John Lennon and the Plastic Ono Band performed at this rock festival, so I was most interested in reading Leo’s perspective being there. And if Lyons himself was not in attendance, he sure made the entire concert experience, with Chicago (Transit Authority), Jerry Lee Lewis, Alice Cooper, Bo Diddley, Chuck Berry, Gene Vincent, Little Richard and the Doors seem eyewitness believable. Lyons took artistic licence in stating that Lennon closed the show, when in reality the Doors were the final act. As a fan of the vocal stylings of Yoko Ono, I could not help but snicker at Leo’s impressions of Ono’s two songs at the Revival, but she did not sing them while shrouded inside a large bag.

Two favourable book reviews are featured on the back cover of Yorkville Diaries. Peter Gault wrote “A superlative debut for a Canadian author who is here to stay.” Lyons himself wrote at the end of the diaries that “The characters in these pages will appear in future stories.” I will look for Lyons’s later works Brown Rice and Clara to find out what happened to Leo.