Tulipomania: The Story of the World’s Most Coveted Flower and the Extraordinary Passions it Aroused 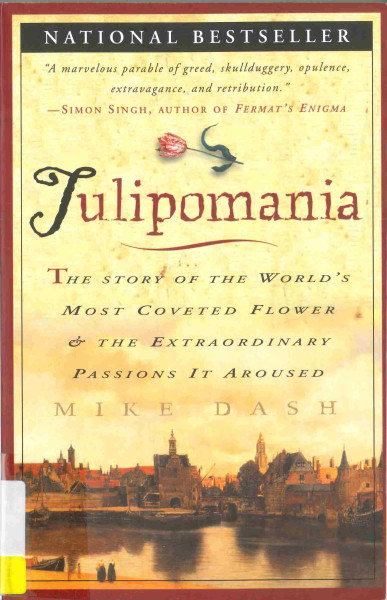 Tulipomania: The Story of the World’s Most Coveted Flower and the Extraordinary Passions it Aroused by Mike Dash chronicles the hysterical reaction tulips aroused in the Netherlands in the early seventeenth century. It is not an exaggeration to say that tulip bulbs at this time were worth far more than their weight in gold. How could a country be so captivated by this flower? Who in his right mind would pay so much for a single bulb?

There is such a strong association with tulips and the Netherlands that it surprised me to find out that the flower was not originally from there. The Dutch may be the most famous for their luxuriant flowerbeds and for sending their tulips all over the world, including to our nation’s capital (Ottawa), yet the tulip wasn’t introduced in the lowlands of northern Europe until the mid-1500’s. The flower originated in Turkey, and when it arrived in the Netherlands, it created a sensation. The tulip was unlike any other flower the Dutch had seen, and was in demand by all those rich enough to maintain a flower garden. Tulipomania sprung forth by the ceaseless demand for these rare bulbs:

“Nevertheless, the number of bulbs available at the turn of the century remained somewhat limited. Most of the new varieties had so far produced only a handful of tulips, and largely for this reason, the flower remained the passion of the privileged few. It was grown principally by rich connoisseurs, who valued it for its beauty and the intensity of its colors.”

“The flower was still comparatively rare, and some of the most highly sought-after varieties were hard to obtain at any price. Only in the coming decade would this scarcity be properly addressed.”

“The scarcity of tulips in seventeenth-century Holland is central to a proper understanding of the bulb craze. To a Dutchman of the Golden Age, the tulip was not a mundane and readily available flower. It was a brilliant newcomer, still bearing something of the allure of the exotic East and obtainable only in strictly limited quantities. Because the most superbly fine varieties were scarce, they were coveted; because they were coveted, they were expensive.”

Once Dutchmen realized the going price for star bulbs, they wanted a piece of the pie. Many sold the equipment of their livelihood–farmland, cattle, looms–to get into the flower trade:

“In greater measure, though, the interest that many Dutchmen now developed in the flower trade owed less to the tulip’s natural beauty than to the dawning realization that money could be made in bulbs. That was something worth investigating. For money, despite the enormous wealth now flowing into the republic, was something many of its citizens saw all too little of.”

The craze however was not as widespread as myth has made it out to be, as Dash pointed out that only tulip connoisseurs, or those whose wealth could afford the bulbs regardless of their price, actually paid thousands and thousands of guilders per bulb. It was a case of keeping up with the Dutch Joneses and instead of comparing cars or swimming pools, the rich Dutch looked into each other’s gardens. If my neighbour had a Semper Augustus variety, I wanted it too. Yet no amount of money could pay for bulbs that simply weren’t there. One can’t fertilize a garden with gold nuggets. So bulb dealers practised an early form of speculation and futures trading. They would sell the bulbs before they had even sprouted yet, and the bulb and future offsets as well. It got to the point where one couldn’t really be sure who owned what part of the tulip plant since dealers were selling multigenerations of bulbs and offsets. All the dealers cared about was selling off the tulip, the bulb or the offset as fast as possible, raking in the money and doing it all over again.

The most prized variety, the pièce de résistance of all tulips, was the Semper Augustus. Yet demand had grown so high for tulips that for the common Dutchman, any variety would do:

“Prices had reached such high levels that the most desirable bulbs became all but unobtainable, and less fancied varieties appreciated to the point where they cost far more than they were worth to any real flower lover.”

Dealers had a slow but growing sense that rocketing prices for substandard tulips was not a normal economic situation, and that a crash was imminent. Dash conveyed that the collapse of the tulip trade was not as unexpected as myth has suggested. The extent of the economic collapse was also not as widespread nor as devastating as the Great Depression, for the simple reason that the number of tulip buyers was still so few. The common Dutchman could not afford tulips no matter what price the cheapest barrel variety was going for. Furthermore, only the very rich could afford the most expensive tulips, and no one, regardless how rich, had sunk his entire fortune into this single floral commodity. Tulipomania has the makings of great mythmaking, but no Dutchman jumped off the top of a windmill because he lost his entire fortune in bulbs.

Tulipomania was a rapid read, yet Dash was repetitious in some sentences, using the same word unnecessarily, such as:

“…and within a few weeks a few of the growers…”

where a synonym for “few” would have sufficed.

Gold, oil, diamonds…who would have ever expected that tulip bulbs could rival these prime commodities and create a trading frenzy? Tulip bulbs at one time were indeed worth more than their weight in gold.